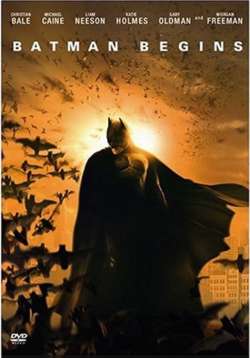 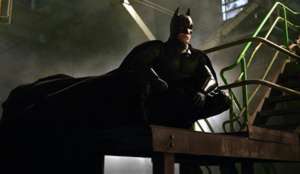 Batman Beginswas a reinvention of the franchise that won a great amount of critical acclaim, but then giventhe state of the films made between 1989 and 1997, they’d got away from the campy ’60s versionssuccessfully but had created a new bunch of footage to be laughed at for all eternity (and TimBurton’s 1989 movie just dragged on and on to the point where you’d just wish he’d not bothered).

So, does Christopher Nolan‘s first attempt at a Batman movie succeed where others have failed?Mostly.

The first hour is taken up with a mix between a look back at two periods in Bruce Wayne’s (Christian Bale)past, the first as an 8-year-old child when he was playing out with a similar-aged version of Rachel Dawes (wholater grows into Katie Holmes, in real life four years younger than Bale but we’ll let that pass)and also witnessing the murder of his parents (Linus Roache and the hottie MILF from SugarRush, Sara Stewart) at the hands of an apparent homeless guy, Joe Chill (Richard Brake),both of whom seem to die with such a ridiculous calm nature about it all. His mother goes without a fuss,while his Dad looks up and whispers “Don’t be afraid” with about as much importance in his wordsas if he was asking Bruce to put the cat out.

The second period is when Master Wayne is fetched out of a ghastly prison, which for some reason he’s chosen tomake a temporary home, but why would he live in such a dingy shit-hole when he’s rich? Henri Ducard(Liam Neeson) is a goateed bloke who turns up when Bruce is in his early 20s to state his assessmentof our hero’s mind that he’s not really feeling any guilt over his parents’ death but that this has nowchanged to anger and claims he can teach him to overcome his anger and face the truth. Ducard has afighting training ground up in the mountains, during which time once they’re up there together he continuesto wax lyrical about anger and grief for what seems like forever.

It’s also at that point in which Bruce Wayne is introduced to a spiritual bod with the bizarre name ofRa’s al Ghul (Ken Watanabe) who will apparently help Batman and show him the path of what’s knownas The League of Shadows, and at this point you’re wondering what on earth all this ninja twaddle going onis about as it plays out more like the CGI into to a computer game, not a blockbuster Hollywood movie.

Events take a turn in his life which cause him to want to fight injustice, not as a man but has a”symbol”, he calls it. No, he doesn’t dress up like a diminutive pop star and start singing aboutAlphabet Street or Purple Rain but, with the help of Lucius Fox (Morgan Freemanwho plays his role like ‘Q’ to Batman’s ‘Bond’) who works in the department at Bruce’s father’sbig office tower where they make big important military-spec weapons and protective gear that neversee the light of day to the general public, he uses the gear to become Batman, including drivinga new style of Batmobile that you would never have dreamed of since it looks less ‘Miami Vice’and more ‘Flintstones’.

There’s a change for the hired help as well, since Alfred is now played by Michael Caine whosecharacter doesn’t age, even when faced with an older Christian Bale trying to look younger than hisyears at the ‘inbetween’ stage with Ducard. Caine also acts more like Barry Norman during the ’80son his Film show, making you wonder when he’s going to utter “And why not…”

Meanwhile, down at the cop shop, another of Batman’s allies is Detective Sargeant Jim Gordon (playedagainst type by Gary Oldman since you usually expect him to be on the wrong side of the law),but he doesn’t really get time to shine until the final act.

In the baddie camp are Tom Wilkinson whose American accent is dreadful as mob boss-typeCarmine Falcone, who we learn about when Mr Chill is testifying against him, 14 years after the deathof Bruce’s parents, in a bid to get early parole. Then we have Cillian Murphy as Dr Jonathan Cranewho experiments on patients in the asylum he runs and he also has one other card to play. Finally,the Wayne corporation is now being run by Earle (Rutger Hauer), who doesn’t come across as abaddie who’d do any physical harm but you just know that the way he behaves he’s not really actingin the best interests of the company, the way Bruce’s father would’ve wanted it to be, and he makesfor a good addition to a well-starred cast.

Oh, and James’ lead singer Tim Booth pops up as criminal Victor Zsaz, not that he gets to do muchthan snarl a bit but either way it’s not the kind of part you expect a pop star to get. 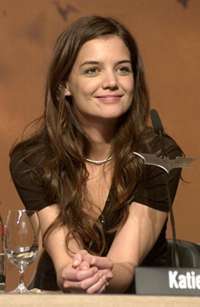 Katie Holmes – she’s absolutely gorgeous…
what a shame she’s engaged to a nutter.

Christian Bale buffed himself up big-time for this role after practically wasting away in TheMachinist, but even once he’s given himself some definition, I still have to ask how does hejump and fly about? And what about Health & Safety as he’s standing on top of buildings looking downover the city? We get the fact that Bruce Wayne is obviously an angry young man, but do just getover yourself!

I also have to say that this is occasionally pretty bloody violent for a 12-cert with chief weirdoScarecrow’s weirdness as he makes you see things that aren’t really there while setting about with aplan to sort out Gotham City once and for all by polluting the water supply with something verynasty, and there’s also the time when he sets fire to someone… Oh, it’s a fantasy story, sorry, sothat’s how they get away with it, I guess.

Batman Begins is a mostly entertaining film but it’s overlong and doesn’t make for the masterfulpiece of cinema a number of people seem to think, even if it does have a better background to it thanthe last lot of Batman movies directed by Tim Burton and Joel Schumacher. It also paves the way fora sequel at the end – cue The Dark Knight, currently penned in for 2008.

Until then, by the time you’ve reached that point, you realise that there were no opening credits andnow you’ve got them all to come.

The film is presented in anamorphic 2.35:1 widescreen with no problems whatsoever, looking great whetherin the bright outdoors for the mountains or down in Batman’s cave. Some of the fight scene editingcould’ve been improved, though, the way they jump about a bit.

Most of the time, particularly towards the end, the Dolby Digital 5.1 sound is fantastic, but theopening shot of bats flying was a big disappointment as it was all in the front speakers with barelyanything flapping behind me and this wasn’t the only the only missed opportunity for with sound effects.

The majority of the extras are on disc 2, with just the first thing below on disc 1:

Trailer (1:00):Presented in 2.35:1 anamorphic widescreen and summing up the basics of the movie nicely.

Batman: The Journey Begins (14:13):Presented in letterbox 16:9 with film clips letterboxed in their original ratio and completelychapter-free (Grrr!), like the rest of the supplemental material, director Christopher Nolan andwriter David S. Goyer, plus other key crew and cast members discuss how they got together toreinvent the Batman franchise.

Shaping Mind and Body (12:48):More of the same, we see how Christian Bale got in shape for the lead role and all the fight traininghe went through.

Gotham City Rises (12:48):Set in the mythical Gotham city, this film took locations in England, including Mentmore Towers thatstood in for the Wayne mansion, Iceland, Chicago and New York, plus a whole heap of CGI to finishthings off. Director Nolan wanted Gotham to look like “New York on steroids” and he certainly achievedthat.

Cape and Cowl (8:16):A featurette that, respectively, discusses what he puts on his body and what goes on his head.

Batman: The Tumbler (13:38):AKA the Batmobile. With massive tyres and a body that looks like it’s an entire Meccano set puttogether by a drunk blind man, this movie certainly takes the brave step of doing somethingthat has never been done before.

Path To Discovery (14:12):A look at the time near the start of the movie when Bruce Wayne travelled to the back of beyond topick a blue flower and then go and train big-time like a ninja.

Saving Gotham City (12:58):Can you get mono from riding the monorail in Gotham City? No, but it’s not wise to be on it whenone of the climactic scenes is taking place. Christopher Nolan says he wanted the action to go as bigas possible at the end and he did a fine job with the finale, which is dissected here.

Genesis of the Bat (14:49):A look back at Batman’s origins and how they translate to this movie.

Confidential Files:A brief insight into anything else you might need to know about Batman’s hardware – including his utilitybelt and The Tumbler, his enemies in the movie and his allies and mentors including Rachel Dawes andAlfred. A nice selection to dip in and out of.

Art Gallery:Over 60 pieces of poster designs for the movie.

Overall, a good film with a large selection of informative extras for the completist, and additionalstuff if you put it in your PC’s DVD-ROM drive. The casual viewer of this one will, however, findthe supplmentals rather watch-once-only.

There are subtitles in five languages, not all of which I can make out because they’re in their nativewriting, but English and German have ‘hard of hearing’ versions too. The disc contains 40 chapters whichis perfect for a film running almost two-and-a-quarter hours.Finally, the menus. On disc 1’s opening menu, you have to go through four pages of language selectionsto choose “UK”! This is then followed by one of those stupid ‘anti piracy’ trailers which, thankfully,can be skipped through but do you really need that once you’ve bought the damn DVD? Then the actual menuappears as 16:9 clips from the film are mixed together with basic options at the bottom of the screen.