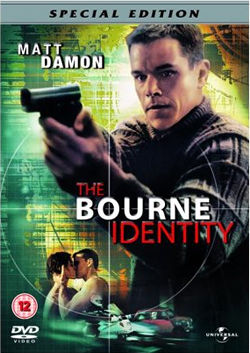 (based on the novel by Robert Ludlum)

We’ve all had days like the lead character in The Bourne Identity.

You wake up, feeling rough as hell and not knowing who or where you are.However, while most of us can attribute that to the combination of beer, ciderand wine from the night before and that we’re at least waking up in somethingresembling a bed, for Jason Bourne (Matt Damon), his bed is the seaand he’s dragged out of it at the beginning of the film by the men on afishing boat.

To cap it all, he’s got two bullets in his back and a device stitched into himwhich reveals the code number of a Swiss bank account – and neither of thosecan be sorted out with a glass of water and a sachet of Resolve.

After making his way onshore and retrieving a barrel-load of money,fake passports and identification from the aforementioned account, he findshis name is revealed to be Jason Bourne, but if there’s plenty of other documentswith his picture on in different names then just who the hell is he? Theauthorities aren’t much help. Every time they confront him he amazes himselfby finding the strength and dexterity to defeat several of them at once. 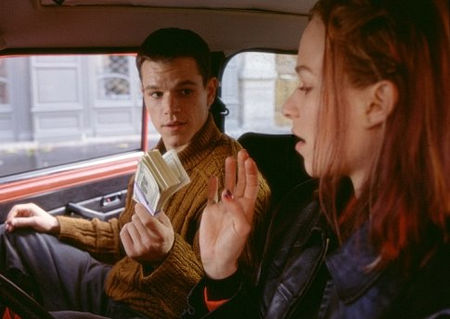 “Look, I’ll bribe you if you pass your test for Comic Relief.”

I could go on, but put quite simply, this is a chase thriller from end to endand a cracking one at that, albeit one that requires a lot of suspensionof disbelief. Damon is accompanied by Run Lola Run‘sFranka Potente as foreign student Marie Kreutz, whose travel visa hasexpired and doesn’t want to be forced to leave the country. Crazed bad guyseven drop by Bourne’s flat in Paris just a few minutes after he’s taken alook around the residence for the first time. The C.I.A. are keen to learnof Bourne’s whereabouts because they thought he was dead, but now they knowhe’s alive and kicking, will they help him out or attempt to help ruin hisday even further?

And talking of kicking, when it comes to violence in the film, it does seemexcessive for a 12-certificate as it’s not done in a play-acting style asyou’d expect from a Jackie Chan comedy. This proved all that was wrong aboutthe new cinema “12a” certificate, which allows children under 12 to see thefilm as long as they’re accompanied by an adult.

When it comes to a film such as this, young children wouldn’t even begin tounderstand it and this would ruin the experience for the rest of the payingaudience. Even Matt Damon went on record as saying it should’ve received a15-certificate due to the violence and the plot. Still, at least it wasn’tcensored.

The cast is complimented by Chris Cooper as CIA team leader Conklin.Cooper’s isn’t a name most people will know, but he’s probably best knownrecently as Kevin Spacey’s obstinate neighbour inAmerican Beauty,Britain’s own Brian Cox making his token appearance in an American filmfor no apparent reason, as Conklin’s boss, Clive Owen, simply known as”The Professor” and I’ll say no more, plus Adewale Akinnuoye-Agbajeas overzealous terrorist-type Wombosi, better known to viewers of the excellentOz as Adebisi. Julia Stiles also shows up as CIA computer geekNicolette, but thankfully not a love interest since she can’t act to saveher life. Finally, there’s a blink-and-you’ll-miss-it from Vincent Franklin.Who? Here, he has a brief line as Rawlins, the head of a security company,while he previously played Rowan, the organiser of the training day in anepisode ofThe Office. 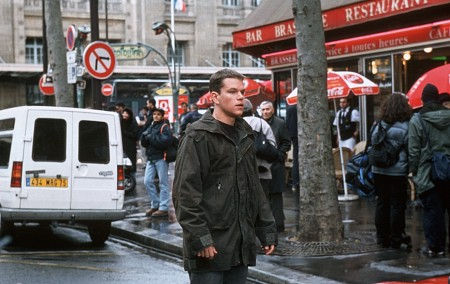 Matt walks on the street
because he drives on the pavement.
Well, you have to fit in with the French somehow.

Presented in 2.35:1 anamorphic widescreen, there’s no faults to the soundor picture. Crisp and clear, it even makes Paris look worth another visit,and actually clean, and full of good drivers. In this re-release, it’sclearly the same print as it still shows up some rather dodgy CGI in a falltowards the end, but I’ll say nothing else about that so as not to spoil it.

Soundwise, the extra extras have meant this takes on a demerit as there’s onlya Dolby Digital 5.1 soundtrack and not a DTS 5.1 one, which I went with lasttime as it was resplendent in fantastic split-surround effects and well-usedsound placing. Certainly a demo disc in scenes like the car chase. DD5.1 willstill be good, but not *as* good.

There are a number of little bits and pieces amongst the extras that areworth a look, but nothing that’ll leave a lasting impression:

This time round the extras are as follows:

And that’s that. This isn’t really a Special Edition, per se, just a cheap cash-inas the sequel gets released in the cinema. The only extras you lose out on fromthe first DVDare a near-15-minute chat-n-clips piece, The Birth of The Bourne Identity,a trailer for the film itself (which should’ve remained included), an extended farmhousescene which was nothing to write home about, teaser trailers for The Hulk andJohnny English, the DVD-ROM extras and they’ve also removed the director’s commentary.

Multiple-language subtitles are thrown away in favour of English only, the numberof chapters remains the same as 20, and the menus are still the same. These haveanimation and some music from the film, but they do repeat a lot.

It has to be said that the new extras offer nothing of worth, and the fact they robthe viewer of a DTS soundtrack is pure madness, hence it’s lost a point for sound andadded nothing for supplemental material. Get the original DVD if you still canas it’s been deleted from many places as I write this.