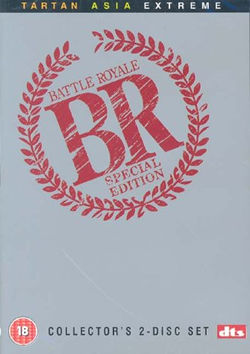 Kenta Fukasaku (based on the novel by Koshun Takami) 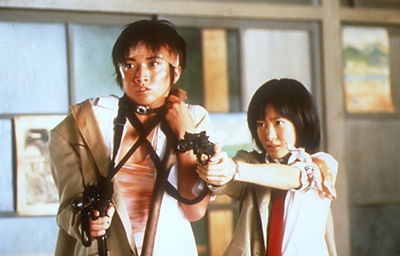 Noriko and Shuya learn about the politics of school life.

The Battle Royale Actto wipe out unruly teenagers – literally, and this Special Edition gives you an extra 8 minutes ofviolence as well as a DTS soundtrack.

Teachers were getting fed up of children being disrespectful on a daily basis, andone of them in particular, Takeshi Kitano (celebrated action director Beat Takeshi), quit the job after hewas sliced in the leg at school. Hence, a law was passed that, once a year, one classfrom one school picked at random in the country, would be transported to a deserted islandand forced to play each other off. Only after all but one of the 42 children were dead wouldthe winner be allowed to return home. If there’s more than one left alive then they’ll findout just how deadly the necklaces can be that they found to be wearing after they all cameto from the knockout gas.

The film concentrates initially on male classmates Shuya and Nobu, who ended up in the samefoster home when the father of the former killed himself, and the girl Nobu admits to havinga fancy for, Noriko.

Along the way are lots of little stories in which the students fail to attempt to resolve issuesfrom the past, whether it’s from a crush that didn’t work out or from two separatecliques that never would’ve passed the time together outside of a situation likethis. Many mind games are played, and when push comes to shove and someone dies,there’s an extreme amount of violence but it’s always the times when someone staggersinto shot with an arrow through their neck that makes you flinch the most comparedto someone trying to remove their necklace and it exploding and causing theirjugular to spew out all over the place.

Interspersed throughout are six-hourly reports from Kitano, detailing who’s dead and wherethe next ‘danger zones’ are, i.e. places not to be unless you want a million volts down yourneck. However, as the film progresses, you’ll be able to keep score when each death is shownand the number remaining is displayed.

LikeSeries 7: The Contenders,this is a kill-or-be-killed scenario with a number of frightening moments as once-good children aremade to take each others lives in horrific scenarios, but it does have one or two lulls in it too whichcould be trimmed.

I think I’ll need to watch this a couple more times to be fully conversant with it as it can see a littledisjointed at times as it cuts between scenes but maybe it’ll seem more well-rounded after then. However,you do still feel the necessary empathy with the characters as they die one by one. 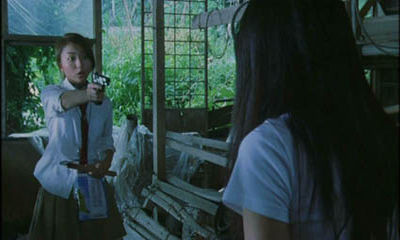 The 1.85:1 anamorphic widescreen frame is filled with shots that are pleasing to the eye,but the print could be better on occasion, but then maybe it’s going for thegrubby-jungle look.

The special effects are loud and occasionally well-used in terms of split-surround effects.Musically, the use of classical music is made very poignantly throughout, be it soft as someone dies,or blaring out the Radetzky March or Blue Danube when Kitano wants to make an announcement.

There are copious extras to this disc which are as follows:

Okay, so there’s clearly some filler amongst the above but a lot of it is the kindof thing that completists will be very happy with.

There are subtitles in English only, plus the option to remove them which isgood as a video would have to have them burned into the print, 24 chapters,and a short piece of the music on the main menu. 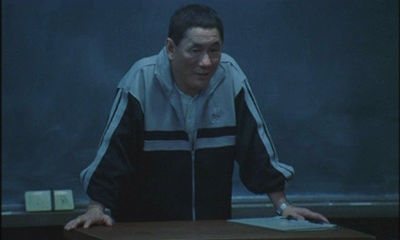