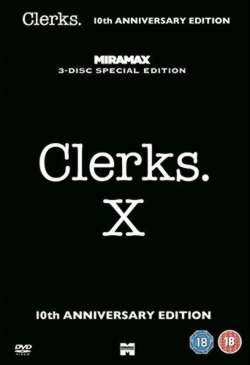 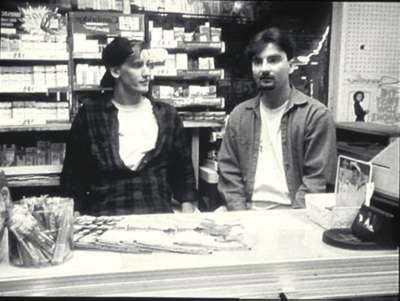 Clerks is a film set around the everyday life of the customers that comeinto a convenience store and the clerks that have to serve them, the former including a man, who we assume tobe a Doctor, who is carrying round a diseased lung in his bag and after showing it to a guy who just wantedto buy a pack of cigarettes is asked to leave, but he doesn’t and the day just goes from bad to worse fromthere, especially since Dante (Brian O’Halloran, right with Jeff Anderson as Randal) has had to open up after pulling a late shift the nightbefore and was expecting to be taking the day off…

Of the random happenings in his life, after a heated debate between Dante and his girlfriend Veronica (Marilyn Ghiglotti) where shetells him she only slept with 3 men including him but she’s sucked 37 dicks, he shouts at the next customer,“37!! My girlfriend sucked 37 dicks!”, to which comes the inquisitive and calm reply, “In a row?”

We also learn of Caitlin Bree (Lisa Spoonhauer) who he dated for five years and clearly still has a thingfor, but it’s been announced in today’s paper that she’s getting married…

Elsewhere, a discussion takes place about the construction of the second Death Star, in Return of The Jedi,and how it was only half-finished at the time so this made for a worse situation as thousands of independentcontractors were killed as part of a war they had no part in. There’s an obsessive man who checks all the eggsin the store to find the perfect dozen, and this is also the first of many films that saw the presence of Jayand Silent Bob, played by Jason Mewes and its director Kevin Smith, respectively (together in thepicture below)

Made for just $27,000, we see great long exchanges between characters, done in a single take with fantasticcomic timing. There’s the occasional hitch as someone comes in late with a line, but that’s better than havingto retake and the rest of the conversation sounding less than natural as a result.

And who could forget Dante’s loquacious best friend Randal, who runs the video store next door, who sums it all up with,“This job would be great if it wasn’t for the fucking customers.” In fact, that reminds me of the timeI spent in the hellhole that was a Little Chef. Like a convenience store, you saw all manner of crazies from7am to 10pm… 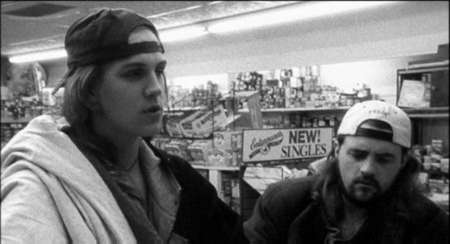 The picture is presented in an anamorphic 1.85:1 widescreen ratio and was shot in black and white for budgetaryreasons, as has been explained in the low figure, but while it’s a bit grainy this does not detract from the filmin any way and actually ads to the starkness and boldness of the picture. The sound is in Dolby Digital 5.1 butthis only really benefits the music. Dialogue remains clear throughout.

Extras wise, disc one is as follows:

Special editions give a film a new breath of life, and disc two presents the original cut with a newcommentary from 2004.

Moving on to disc three and there are even more supplmentals for your delectation:

On top of that, the dialogue and subtitles are in English only, the latter being for the hearing-impaired,there are 18 chapters which is fine for this length of movie, and the menus contain inventive uses of soundclips on occasion.