CliffhangerHang on.
Distributed by
Momentum Pictures 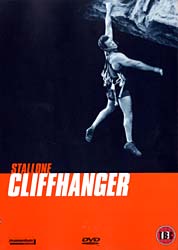 “Ow, that’s gotta hurt!”,must be the words going through Gabe Walker’s (Sylvester Stallone)mind when a freak accident in the mountains leads to the death of his friendHal’s (Michael Rooker) girlfriend Sarah (Michelle Joyner) asshe plummets to a rocky end, surprisingly to the delight of their pilot(watch in amazement how he never stops grinning!)

Eight months later, Gabe and Hal are back amongst the heights with a newpilot, Jessie (Northern Exposure‘s Janine Turner), just as theirpeace is to be shattered once again with the devilish Qualen (JohnLithgow) and accomplices including Kristel (Caroline Goodall),police turncoat Travers (Rex Linn) and a star from Eastenders,Delmar (Craig Fairbrass). Their paths cross since an aeroplane accidentleaves three suitcases stuffed with cash – $100m to be exact – being droppedinto the perilous mountain range and two entire planes going down with them,leading them to using our heroes to search for it on their behalf.

Hugely enjoyable upon its release and just as much so now, director RennyHarlin, once married to Geena Davis, presses all the right actionbuttons he managed with Die Hard 2 andThe Long Kiss Goodnightand provides a real non-stop near-two hours of entertainment.

Also, it may be that the UK DVD release is finally uncut. The previous versionsin the cinema and on video and laserdisc were chopped to a 15-certificate.Scenes that were edited included a grisly end for a baddie in a cave, gettinginformed of the difference between stalactites and stalagmites. The disc Ireceived for review, though, was printed with German text on the disc itselfso I am gladly watching the fully uncut version.

I have absolutely no complaints with the picture. Artifact-free, it’s inthe original 2.35:1 widescreen ratio – always fully employed by Harlin -and is anamorphic.The average bitrate is 5.93Mb/s, briefly peaking over to 9Mb/s.

A remastered Dolby Digital soundtrack is available in English only (Germansget surround sound) and it rocks aplenty such as with avalanches, explosions,a plane crash, gunfire and more explosions. Dialogue is clear too, exceptfor Stallone 🙂

In the extras dept., the first trailer, in non-anamorphic 1.66:1, lasts twominutes and is the dialogue-free cinema trailer with clips from the filmmixed in with a piece of classical music, the name of which escapes me at themoment, while the second, running for 90 seconds, is a not dissimilar but usesWagner‘s Ride of the Valkyries, the classical piece used inApocalypse Nowwhen the choppers move in.

There are 24 chapters, which is fine and subtitles are available inEnglish, German, Dutch and Turkish. The main menu is animated and scoredwith a clip from the film and there are animated swipes between the menus.

The English subtitles have a lot to answer for at times in the translation.When things go wrong for the bad guys and one says “Kill the pig” tothe cop, ‘pig’ between ‘swine’, to which he replies, “Kill the pig, my ass!”,which is translated as “Lick my ass!”. Oh well, whatever turns him on!:)