Close Encounters of the Third Kind:
Collector’s Edition“We are not alone.”
Distributed by 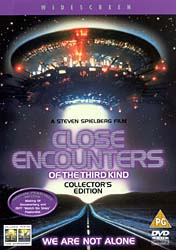 In Indiana you have to keep up with the Jonesesand, inClose Encounters of the Third Kind: Collector’s Edition,Roy Neary (Richard Dreyfuss) makes his mark by discovering polite aliens,expressing his interest by building a make-shift mountain out of mashed potato.His wife, Ronnie (Teri Garr), thinks he’s lost the plot until the proofis revealed and who can forget the classic ending with the spaceship playingalong to ‘pipes of peace’ playing those five notes.

Director Francois Truffaut takes up one of his part-time acting rolesas Claude Lacombe, the big cheese when it comes to the highest authority figurethat Neary can speak to about his alien fears. Melinda Dillon also hasa sizeable role as Jillian Guiler, whose young son is one of many people whogoes missing once the pre-E.T.s have come to stay.

Spielberg’s magical masterpiece is finally available and almost given thetreatment it deserves in a version which takes the extended 131-minuteSpecial Edition, put together just three years after the original release,remasters it in High Definition format and proves we are not alone when wehave a second disc of extras for company.

The first question is that why, for a film that has been struck from a HighDefinition print, is there a fair amount of shimmering in a number of scenes,mostly dark ones. On the plus side, the film is presented in the original2.35:1 widescreen ratio and is anamorphic.The devil’s work is in hand since the average bitrate is 6.66Mb/s.

English is the dialogue of choice – and the only one – but we get it inDolby Digital 5.1 and DTS 5.1, the latter regularly going the extra milefor impact when such a scene demands it.

Richard Dreyfuss never got the hang of golden showers…

The extras have been pushed over to a second disc because of the extrabandwidth taken up by the welcome DTS 5.1 soundtrack and they begin withthe 102-minute featurette, “The Making of Close Encounters of the ThirdKind”, which contains chat from principal cast and crew members, clips innon-anamorphic 2.35:1, a look at the casting of hte film, production stories,the special effects and the need for the Special Edition version.

A mini featurette, “Watch the Skies”, is included which lasts a merefive minutes but was made in 1977 at the time of release, two Trailers– one for the original version and one for the Special Edition, Cast andcrew filmographies for the top four cast members plus director Spielbergand, finally, 11 Deleted Scenes.How come there’s no director’s commentary though?

The main menus on each disc are animated, starting off with those five notes,then featuring the spaceship.