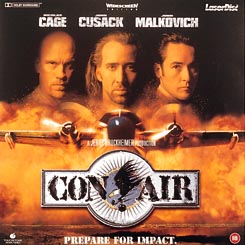 Con Airis, in essence, the tale of Cameron Poe, an army serviceman whokills a man in self-defence outside the bar where his wife Tricia works.Sent to prison for seven years, he’s now on his way home to see his daughterfor the first time on her seventh birthday. All he has to do is survive thetrip home aboard the flight containing the worst hardened criminals in theworld… and that’s before Garland Greene gets on the flight – the man whoconfesses to killing a little girl and wearing her head as he drove acrossthree states.

As the plane is skyjacked in mid-air, the operation being led by Cyrus “TheVirus” Grissom, Cameron fights to keep these savage convicts from massacringeveryone on board as they career towards the famed Las Vegas Strip. His onlyally is Government federal agent, Vince Larkin, on the ground who battles tokeep his overzealous superiors from blowing the plane into oblivion when theythink there’s no other option.

For me, like 1996’s The Rock and 1998’s Armageddon, this is theaction film of the year, the central reason I attribute this to being theproducer Jerry Bruckheimer, as well as his late co-producer partnerDon Simpson who worked on all of their films together up until TheRock, after which he died of a drugs overdose.

If there’s one thing Bruckheimer specialises in, it’s explosions – lots of them,but only if they’re big and loud. This film has them in spades, not to mentionmore action in one film than most entire film trilogies. It also has plenty ofsuperb one-liners. Since The Rock had a hand from Auf WiedersehenPet writers, Dick Clement and Ian La Frenais, I wouldn’tbe surprised if they were involved in this one. I can’t wait forArmageddon to touch down on laserdisc…

Heading the cast are three fine leads. Nicolas Cage and John Cusackhave already proved their worth with comedies. Cage made his name in the actionfield with The Rock and now there is plenty of scope for Cusack too.John Malkovich, meanwhile, mainly appears in dramas, but served well asthe bad guy in 1993’s In The Line Of Fire.

Another real credit to the film comes in one of the finds-of-the-decade,Steve Buscemi. In this and Armageddon, not only does he have amemorable role, but he gets all the best sarcastic-comedy lines. The rest ofthe prisoners also have their part of play, each with a well-defined persona.

The only real flies-in-the-soup are Colm Meaney and RachelTicotin. I still haven’t worked out why Hollywood give Meaney the time ofday. He does well in home-grown drama, but just seems out of place in StarTrek: Deep Space Nine and here with a dodgy American accent. Ticotin on theother hand gets some of the worst dialogue around. When she first sees Cage onthe prison bus he shows her a picture of his daughter. Her twee line: “Whatyou’ve got here is a walking, talking reason to reabilitate”. When Cage tellsBaby-O it won’t be long before she’s dead (not long after her encounter with’Johnny-23′), she tells him to “think of your little girl”.

One line of dialogue has been cut between the cinema version and this. Italso didn’t appear on the NTSC laserdisc or the UK PAL video either. Afterthe plane touches down on the Vegas strip, Sally-Can’t-Dance looks bemused atall the cops and mouths “Oh, my!”. In the cinema he said, “Oh my, men inuniform!” I can’t begin to think why this classic line was cut. 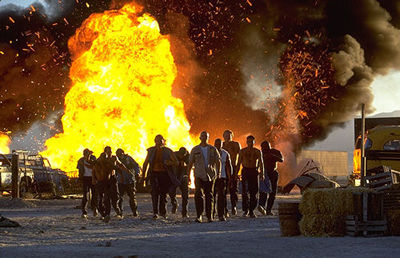 The best action film of the year needs an excellent picture quality to bringout the action, explosions and all the colours of the rainbow that shoutout in the Las Vegas scene. The Rolling Stones said you can’t always get whatyou want, but I’m pleased to report that here you get exactly what you want.The quality is perfect and the film is presented in its original widescreenratio, essential for a Panavision action film and serves as a nice debut fordirector Simon West‘s first theatrical venture.

It’s interesting to note that there’s a scene here which I haven’t seen withsuch clarity since the time I saw it in the cinema – the moment where one of theplane’s engines loses a part near the end which spins out of control and fliesback through the plane inbetween Cage and Malkovich. It always seemed a littlefuzzy on video, but here’s it’s perfect.

The sound is also the best that Dolby Surround can provide – explosions,gunshots, bangs and crashes and more explosions. Add to this the musical scorefrom Mark Mancina and top tunes including the orginal version of theballad “How Can I Live” by Tricia Yearwood and Lynyrd Skynyrd’s “Sweet HomeAlabama” and you won’t be disappointed.

If I had one complaint though, it’s that there are only 19 chapters throughoutthe two hours of the film. There is, however, a chapter alone for the endcredits. One point: There’s a sticker on the back of the cover stating that”all chapter numbers printed on this LD jacket should be advanced by one”because the opening Touchstone Pictures logo has been alloted the first chapterto itself. Ransom and Scream also suffer this problem.

Also, why is there no trailer?

Overall, this isn’t the sort of film which would clear the board at the Oscars,but is the perfect example of an action film which doesn’t let up. Even ifyou have just a slight interest in this genre, this comes well recommended.If you’re an action fanatic, buy this, buckle up and enjoy the ride!FILM : ***** (I’d award more if I could!)PICTURE QUALITY: *****SOUND QUALITY: *****EXTRAS: 0——————————-OVERALL: ****