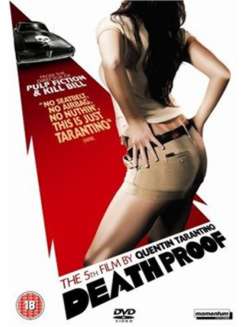 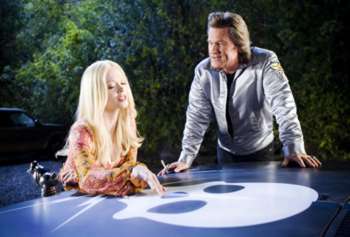 Death Proofwas planned to be released as part of the Grindhouse double feature with Robert Rodriguez’s PlanetTerror, but while it worked in the US, in the UK they just released Tarantino’s effort and the otheris out on DVD in March this year. In fact, cinemas here wouldn’t have liked having two films for the price of oneas it means less money in their coffers due to less screenings and you won’t get people buying two buckets ofoverpriced popcorn.

So, what’s it all about? Well, in a film that’s basically split in two, there’s a bunch of girls in each andStuntman Mike (Kurt Russell) will be the death of them… possibly. The name of the film refers to hisstunt car that’s protected to the hilt such that he could slam it into a brick wall at 125mph and survive unscathed,and we first see him in a bar frequented by radio DJ ‘Jungle Julia’ (Sydney Poitier), Shanna (JordanLadd), Arlene (Vanessa Ferlito) and, separately, barfly Pam (Rose McGowan, right, with Russell), while later hemeets Abernathy (Rosario Dawson), Lee (Mary Elizabeth Winstead), Kim (Tracie Thoms)and stuntwoman, appearing as herself, Zoe Bell (below-right).

So, that doesn’t really tell you a lot… but then there’s not a lot to tell. Apart from a great scene about40 minutes in, which has replay value, plus a long car chase as part of the last 25 minutes, which has beenslammed for being boring but I actually really enjoyed that part. However, the rest of it is rather self-indulgentand gets quite boring at times. I’m all for long-winded conversations in films, even if they don’t really goanywhere. This was fine inReservoir DogsReservoirDogs, Jackie Brown and Pulp Fiction. However, it went off the boil in Kill Bill and it’s fallen apart here tothe point where they’re just not interesting. 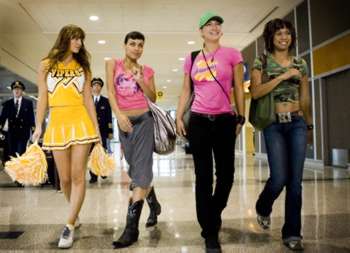 Also, we get the idea already that this is a ’70s-style movie (despite some characters using a mobile phone) and we don’tneed the scratchy-film effect to prove this. It’s got the “Our Feature Presentation” and the old “Restricted” certificatelogo do that already, so to continue it beyond this just gets in the way of the film proper, especially when it makesthe film ‘jump’ while it’s playing, thus interrupting the flow of the content and disrupting dialogue, so put thesubtitles on. And just to be even more weird, this happens a lot more in the first half of the film than the second.

The return of Michael Parks as Earl McGraw from From Dusk Till Dawn andKill Bill was welcome at first,although whereas his latter appearance was a nice return from his brief time in the former, his appearance herecomes across as just a parody of the former. Tarantino throws himself in front of the camera again, this timeas barman Warren, but whereas in other films he’s seemed relatively natural, here it’s all rather forced. There’salso a scene where Arlene gives a lapdance, but like the other girls she’s with, she looks a bit chavvy and itdoesn’t come across as sexy at all.

So, overall, if you’re a fan of Quentin Tarantino’s films you’ll definitely want to see this, but if you’re likeme you’ll be wondering if his next outing will be as inadvisably self-indulgent or if he’ll pull the reigns backin. I hope the latter. 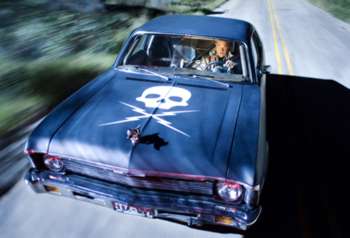 The 2.35:1 anamorphic widescreen print is difficult to quantify as even if there were any accidental flecks onthe print then they’re masked by the absurd aforementioned effect. Sound comes in Dolby Digital 5.1 and is perfectlyfine for the scenes that are worth watching, songs come across well, while dialogue is only interrupted on occasionas previously described.

The extras are as follows, the first three items coming on disc one and the rest on disc two:

In addition, there’s pre-DVD trailers for Planet Terror (which I am looking forward to despite the waythis entry turned out), Control (the biopic of Joy Division’s Ian Curtis which I really want to see)and The Hunting Party (a war zone drama with Richard Gere which looks very interesting), but theseshould be in the main menu, not before the film, even if it is coming out in the cinema shortly rather thanbeing out on DVD. This is not the age of the rental video(!)

The disc comes with English subtitles and there are 21 chapters to the film (plus the ability to go straight to themusic moments). The main menu contains the end credit music, Chick Habit by April March, along with clipsof the film, whereas disc 2’s has footage of the jukebox in the bar scene which, according to theIMDB’s trivia page for this filmis Quentin Tarantino’s own. It was trucked to Austin to be used in the film in its very own rig. The list ofsongs on it was also hand-written by Tarantino.