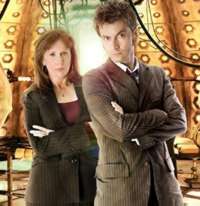 (Daleks In Manhattan, Evolution of the Daleks, The Impossible Planet, Partners In Crime, The Satan Pit, Smith & Jones, Voyage of the Damned) 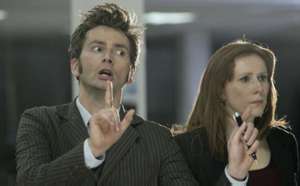 Synopsis: The Doctor is reacquainted with Donna, who helps him stop the manufacture of adeadly weight-loss pill…

Forgetting the bland Voyage Of The Damned at Christmas, the lasttime we saw The Doctor he’d just bid farewell to Martha Jones, who decided totake a sabbatical from her adventures with the Time Lord. The premiere ofseason 4, Partners In Crime, opens near-identically to Martha’sthird season debut, with one-time companion Donna (Catherine Tate) alsostriding purposefully down a busy London street  but unaware The Doctor (DavidTennant) is on the same street, for the exact same reason…

Donna, posing as a health and safety officer, infiltrates the offices ofAdipose Industries, a business offering a miracle drug to help the country’soverweight population. In extended comic sequences, it transpires that TheDoctor is investigating the same company, although they both humorously avoidbumping into each other.

Donna eventually goes to meet slimmer Stacey Harris (Jessica Gunning),while The Doctor visits Martin (Roger Davey), who is happy with theAdipose pill’s fat-losing effects, but confused about why his burglar alarmhas started going off at 1.10am every morning…

That riddle is answered by Donna, as Stacey goes upstairs to the bathroom, leavingher to fiddle with a gold pendant Adipose Industries hand out as freebies totheir customers. After absent-mindedly twisting the pill-shaped pendant, ittriggers a reaction in Stacey upstairs  who watches in horror as her stomachbegins to pulsate, and eventually her whole body turns into tiny, chubby,white alien babies.

Concerned, Donna bursts into the bathroom to find a puddle of Stacey’s clotheson the floor and a marshmallow-like alien perched on the bathroom window!

According to Adipose Industries’ executive Miss Foster (a frosty Sarah Lancashire),the pendant triggered premature “parthenogenesis” in Stacey Harris, and shedispatches some of her employees to clean up the scene…

From there, we get a better understanding of Donna’s current situation after heradventure with The Doctor in The Runaway Bride Christmas Special. She’sliving with her irritating mother Sylvia (Jacqueline King), but prefersto spend time with her “Gramps” Wilfred (Bernard Cribbins), who spendshis days “up the hill” on his allotment, staring at the stars through atelescope.

There’s a great scene for The Doctor inside the TARDIS, as he realizes he’stalking to himself about the investigation (signifying his unease at beinga lone adventurer), but he’s soon back at Adipose to single-handedly thwartMiss Foster’s plans. He snoops on Miss Foster by using an outside window-cleaningrig to position himself outside her office, where he eavesdrops on Miss Fosterberating one of her employees, Penny Carter (Verona Joseph), who appearsto have cottoned-on to her masterplan…

Donna also arrives, and there’s a brilliant scene where The Doctor and Donnafinally clasp eyes on each other — albeit from behind a sound-proof windowand door, on opposite ends of Miss Foster’s office. Possibly intended as a digat Catherine Tate’s brash nature during Runaway Bride, I thought it wasparticularly amusing of writer Russell T. Davies to have Donna shout and”overact” from behind solid glass, effectively silencing her with mime. It wasa nice touch, and the scene has a funny pay-off when Miss Foster calmly interjectson The Doctor and Donna’s silent “conversation.”

The Doctor and Donna are finally reunited, with Miss Foster in hot pursuit(armed with a sonic pen), which she uses to trap them both on the window cleaning-rig with Donna dangling from the broken rig, and The Doctor seconds away from afreefall to death. However, after managing to knock Miss Foster’s sonic penaway with a ricochet effect from his sonic screwdriver, he manages to get themboth to safety inside the Adipose office block. 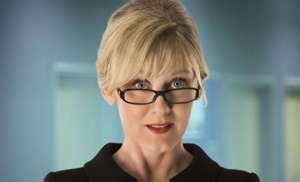 In typical villainous fashion, Miss Foster and two armed goons eventually locateThe Doctor and Donna, and she monologues her nefarious plot: to use Earth asan alternative “breeding planet” for the Adiposian First Family. Behind thewall of the office block is a large system called The Inducer, which can makethe 1 million users of her slimming pill go into parthenogenesis and transforminto millions of tiny alien Adipose children immediately.

The Doctor slips away from Miss Foster with Donna, by creating a sonic wave blastfrom his screwdriver and her pen, before finding a cupboard with access to TheInducer.

Miss Foster starts the Inducer system, and overweight pill-takers across Londonbegin to contort in pain as their body fat coalesces into chubby aliens. TheDoctor uses one of Adipose Industries’ pendants to dampen the effects of TheInducers, but is at a loss once Miss Foster increases the power. Fortunately,Donna has another pendant to hand, and the two combined manage to override thesystem. Still, Miss Foster is content that 10,000 Adipose have been created,and the thousands of chubby aliens march together down London streets, astheir nursery ship (looking extremely similar to the Mothership in CloseEncounters Of The Third Kind) descends to collect them.

On the roof, The Doctor and Donna watch the Adipose babies float upwards tothe nursery ship through the night sky, along with Miss Foster. The Doctorwarns her to escape the ship’s tractor beam, but she’s convinced she’ll behandsomely rewarded by the Adiposian First Family for her duties as nanny.But, of course, as The Doctor warned, the Adiposians have no need for a”foster mother” now that their children have been born, and she plummets toher death.

With disaster averted (or at least limited) by The Doctor, Donna invites herselfalong for more adventures. The Doctor only seems to half-remember asking Donnato be his companion, before she turned him down, but now she’s convinced it’s the right thing to do. In fact, she’s already fully packed with suitcases fillingthe boot of her car!

The Doctor, despite admitting he’s lonely, makes it clear that things got complicatedwith Martha, but seems relieved when Donna makes it abundantly clear she doesntfancy him.

Donna leaves her car parked in an alley next to the TARDIS, drops the keys ina nearby bin, and phones her mum to say goodbye. Just before she leaves, Donnaasks a blonde girl to keep an eye out for her mum, then rushes off to be withThe Doctor.

The blonde girl turns around and reveals herself as Rose! Looking strangelysad, Rose walks away… fading like a ghost, until she disappears…

The episode closes with Gramps in his allotment looking through his telescope atthe twinkling stars, as the TARDIS spins into view, with The Doctor and Donnaclearly visible through its open front door. As Gramps yelps with joy, theTARDIS ascends to the heavens, taking his granddaughter on the ride of herlife… 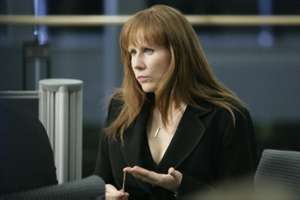 Russell T. Davies manages to deliver an effective premiere, which entertaininglyreintroduces Donna Noble and tweaks her character away from the shrill caricaturethat caused upset in The Runaway Bride special. There are moments whenDonna’s feisty nature comes through, but it’s tempered by a more whimsical airand infectious enthusiasm. Above all, it’s just nice to have a companion whocategorically has no intention of smooching with The Doctor (the crippling ofthe otherwise great Martha last year), as it consequently results in a fresherDoctor/companion relationship.

The episode’s story is better suited to The Sarah Jane Adventures, butthe sense of fun and some genuinely funny moments help make it palatable forteens and adults. But I’m sure kids will love the adorable Adipose babies, asyou can already see them on toy shelves for Christmas. The sequences with thehundreds of Adipodes were apparently created using “Massive FX” computersoftware created for Lord Of The Rings, and it’s certainly an improvementover the swarms of Daleks we’ve seen on the show before.

Partners In Crime certainly kept me entertained, and I was struck bythe chemistry between The Doctor and Donna, with Catherine Tate giving an evenperformance. David Tennant now firmly embodies the wandering Time Lord with anauthority not seen since Peter Davison’s ’80s tenure. He just lacks the iconicpresence of Tom Baker, really; but he’s still marvellous to watch bounce throughscenes.

And what about that surprise appearance from Rose? I didn’t see that one coming,although I did realize it was Rose from her hairstyle, before her face wasshown. I know, it’s sad. It looks likely she’s season 4’s “arc” element (to besprinkled throughout the 13 episodes), but why is she back? Her ghost-like disappearancehints that she’s found a way to cross dimensions from her own parallel universeinto ours, but for what purpose?

Overall, Partners In Crime was a competent, efficient and entertainingstart to the new season. There were the usual gripes with Doctor Who in evidence(the gross overuse of the sonic screwdriver, primarily), and I’m confused aboutGramps musing on the mysteries of the universe  as he debuted in Voyage Of The Damnedas someone expecting first contact because the previous two Christmases hadaliens openly attacking London  but never mind.

Doctor Who and Torchwood have always operated around populations with dumbreactions to alien first contact, and very bad memories…

All said, I found this to be a good episode with more to recommend than topick fault with. Catherine Tate might not be as physically attractive asBillie Piper and Freema Agyeman, but she brings a welcome change of dynamic,and her character has definitely improved from Runaway Bride on thisepisode’s evidence. I’m more excited about the possibilities of Season 4 thanI was before watching this episode…

Join in the discussion about this episode atDan’s Media Digest