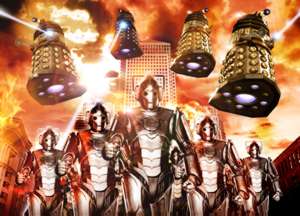 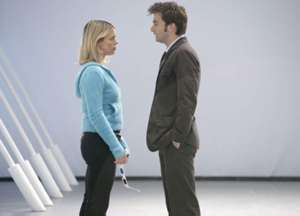 Synopsis: The final episode of the second series proves to be every bit as excitingand fun as the first part Army Of Ghosts suggested it would be. After aslight reprise of events in the prologue, the action continues from wherepart 1 left off, with a Dalek foursome protecting a “Genesis Ark” in thebasement of Torchwood Tower, while 5 million Cybermen dominate the planetoutside…

Doomsday is certainly all pay-off to Army Of Ghosts, with theemphasis firmly shifted in the direction of visual thrills and fraughtadventure.

The story works much better as a continuation of the mid-season Rise OfThe Cybermen/Age Of Steel two-parter, particularly when the alternateuniverse Pete Tyler appears and rekindles his relationship with Jackie.

Of course, the inner child in all of us will undoubtedly get a kick fromseeing the Cybermen versus the Daleks, and the resultant battle between thecyborgs is a lot of fun, if occasionally undermined by banter (the Dalekshave developed a wicked sense of humour it seems, and Mickey likens theenemies sparring to “Stephen Hawking versus the talking clock”!)

David Tennant does fine work here, furthering my belief that he’sat the mercy of the writing. Unlike Christopher Eccleston, he can’t elevatecrap writing with as much success, but here he’s given a script that playsto his strengths: he’s passionate, believable, able to balance the humourwith drama, and in the climactic sequence The Doctor seems more frail andhuman than we’ve ever seen him in the series. Marvellous.

Likewise, Billie Piper does a great job with all her emotional scenes.Rose as a character had certainly reached the end of the road, with thewriters unable to stretch her beyond the archetypal teen she began the showas. It was excellent to see the Tyler family unit given a wonderful resolution,and Piper’s beach-set farewell with The Doctor marks a highpoint for theshow, and eclipsed all the visual fireworks thrown at the screen.

Yes, the visuals were excellent, particularly the Cybermen versus Dalekbattles. The sequences with flying Daleks remain obvious composites, but arestill effective in wider shots and never seriously detracted from thevisceral enjoyment of scenes. Doctor Who should certainly be applaudedfor delivering epic sequences on a relatively small budget. 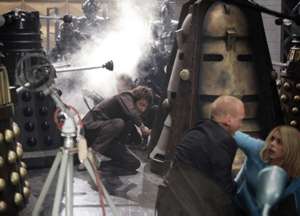 Elsewhere, the supporting cast are on the periphery throughout, with manycharacters facing quick deaths, although Shaun Dingwall continues hisexcellent work as Pete Tyler and has a great scene with Camille Codouri‘sJackie that walked the tightrop between comedy and drama expertly well.

Overall, this was an impressive finale that made last year’s The PartingOf The Ways look small in comparison. What really made the episode workwas the excellent writing for the sensitive scenes between the main characters,particularly The Doctor and Rose.

Writer Russell T. Davies is often slated by fans for his trashy episodes(New Earth), silly excesses (Aliens Of London) or plainstupidity (Love & Monsters), but he’s undoubtedly the best writer forthe dynamic between The Doctor and Rose.

Series 2 ends on a real emotional high (and a bizarre scene with Catherine Tate!),that matched my own hope that series 3 will reinvigorate the show with itsnew companion Martha Jones (Freema Agyeman).

The honeymoon period is certainly over for the new Who, and the producerscan’t always rely on the Daleks to exterminate any lull in ratings, so Ihope they take heed and deliver some purer sci-fi thrills next year… andmaybe leave contemporary London behind for awhile, Mr Davies…?

UNTIL CHRISTMAS: Series 2 is over, so now we can look back on thepast 13 episodes with hindsight…