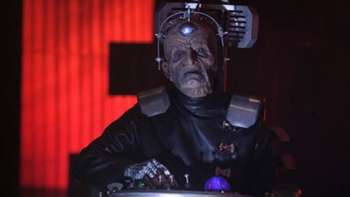 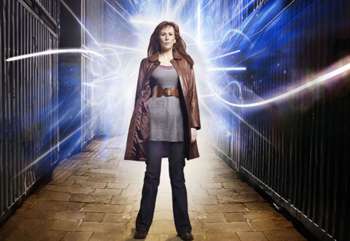 Synopsis: Davros reveals his master plan, as the Doctor’s companions race to preventthe destruction of reality itself…

A cloud of secrecy descended on Doctor Who this week, as viewers were leftshell-shocked by the apparent regeneration of David Tennant as the cliffhangerending to “The Stolen Earth”.

Voracious speculation sent forums and blogs into meltdown, while the nation’skids were left on the precipice of bereavement for their hero. But, as predictedby those aware of the various “get-outs” available to Russell T. Davies, the popularTennant lives to regenerate another day…

“Journey’s End” continues the story with the exact same temperament; furiouslypaced, mostly illogical, and continually threatening to disappear up its ownbackside. Still, with your brain disengaged and focused on the sweeping emotionof everything, this conclusion was easy to enjoy and got enough right to makethe journey worthwhile.

Perhaps inevitably, the solution to The Doctor’s life-or-new-life crisis issolved within seconds — a simple transference of his regenerative powers intothe hand lopped off in “The Christmas Invasion”, after his wounds have beenhealed, but his bodily transformation had yet to begin. From there, the storylineonce again splinters into various strands: The Doctor, Captain Jack (John Barrowman)and Rose (Billie Piper) brought aboard the Dalek Crucible mothershipby Davros (Julian Bleach); Donna (Catherine Tate) trapped aboardthe TARDIS as it’s sent to a fiery destruction; Martha (Freema Agyeman)teleporting to Nuremburg to use the Osterhagen Key as a last-ditch effort tosave the planet; and Sarah-Jane (Elisabeth Sladen) teaming up withJackie Tyler (Camille Coduri) and Mickey Smith (Noel Clarke) aboarda Dalek detention centre…

For a 65-minute episode, events fortunately didn’t drag as badly as the similarly-long”Voyage Of The Damned” special, as Russell T. Davies clearly uses this episodeto bring a sizeable number of plot-strands to a close  stretching right back toseason 1. Primarily, Rose’s love for The Doctor is imaginatively brought to aclose, thanks to the arrival of a Human-Doctor hybrid clone, grown from TheDoctor’s dismembered hand after Donna touches it… 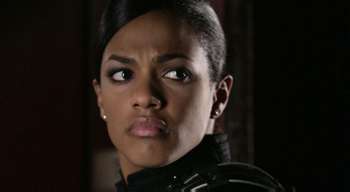 While the plausibility of nearly everything is stretched to breaking point,the greatest success of “Journey’s End” is a central gambit  with Davros takingperverse delight in demonstrating to The Doctor how his “children of time”have learned nothing  ready, willing and able to destroy billions of people onEarth for a kamikaze-style victory. The scenes between a captured Doctor andDavros are amongst the best, as Tennant is finally able to face-off against avillain with an interesting viewpoint, beautifully performed by a raspingJulian Bleach.

The sheer volume of returning characters means most suffer: particularly JackieTyler (used purely as comic-relief), Mickey (always irritating, and now palmed-offinto Torchwood  god help us), Sarah-Jane (whose history with Who mythology continuesto be her only interesting aspect), Martha (who came across as a recklessidiot who’s learned nothing), Captain Jack (a character who rarely operatesabove gun-toting cheeseball), and the pointlessness of Gwen (Eve Myles),Ianto (Gareth David-Lloyd) and Luke Smith (Thomas Knight).

Fortunately, the actors that count got interesting stuff to do: David Tennantwas relegated to standing around watching others try to save the day at times,but was never anything less than compelling otherwise (and got a fun dual roleas a Doctor tinged with Donna’s impertinence); Billie Piper was lost in themix for awhile, but the poignant beach-set resolution to her affection forThe Doctor worked better than it should have; but Catherine Tate stole all thememorable stuff  “mothering” a cloned Doctor, being endowed with The Doctor’sknowledge (and mannerisms), before ending the season on a bittersweet note.Bernard Cribbins had very little screen-time as her Gramps, but showedhis experience by tugging at the heart-strings with greater ease than everyoneelse put together. 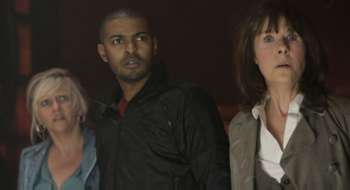 In terms of production, the special FX were excellent throughout  the DalekCrucible was incredibly detailed and well-designed, scenes of flying Dalekswere free of digital judder, and epic shots of multiple planets and shipsevidenced the money lavished on these last episodes. If anything, it’s hardto imagine the visuals getting any grander, or the stakes being raised anyhigher than the total destruction of reality itself, so I’m guessing future-bossSteven Moffat’s automatically going to employ a “less is more” tactic when hetakes over…

Overall, if you enjoyed “The Stolen Earth” you’ll definitely enjoy this, andvice-versa. It’s every bit as questionable and freewheeling as last week, butdoesn’t contain anything to rival events in the juicier set-up. Still,everything drew to an effective conclusion and left 2008/9 a clean slate forthe 4 specials before Steven Moffat inherits the show in 2010.

There are plenty of nitpicks (Sarah-Jane just happened to have a necklace-bomb?),lots of silly moments (German Daleks!), and accusations of RTD fooling around willfly around for days, but this was still an entertaining series swansong. Thestrong performances from Tennant and Tate (the latter of whom earned aturnaround in feeling about her casting), helped pull you through moments ofsilliness, and a storyline that felt half-improvised. And I liked the scene ofThe Doctor and his companions piloting the TARDIS back home  perfectly reflectingthe episode’s theme of friends working together to save the day.

Join in the discussion about this episode atDan’s Media Digest