Escape From New YorkOne man against 3 million criminals
in a bid to rescue the President.Distributed by 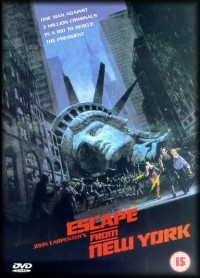 John Carpenter’s Escape From New Yorkis the prequel to 1996’s Escape From L.A., with KurtRussell first taking on his role of Snake Plissken.

In 1988, the crime rate in the USA rises 400%. To curb the rampant violence inthe streets, the once great city of New York becomes the one maximum securityblockade in the entire country. A fifty foot containment wall is erected,completely surrounding and isolating Manhattan Island. All bridges and waterwaysare mined. The US Police Force, like an army, is encamped all around the prisonand helicopters circle overhead incessantly. There are no guards inside, onlythe prisoners, left to live on their own in a place where lawlessness reignssupreme and there is only one rule: once you get in, you don’t come out!

It’s now 1997. The plane conducting the American President to summit meeting ofworld leaders is abducted by terrorists and crash-lands in New York. Before thePolice Force can reach him, the President is taken hostage. The only way torescue him in time for the decisive conference is to have a prisoner infiltratethe dark bowels of the penal colony.

Snake Plissken is picked because he’s a tough-as-nails veteran of the SiberianFront in World War III, sentenced for robbing a bank. In exchange for hisfreedom, Snake is given 23 hours to bring back the President alive – and ifhe needs a reason not to go AWOL it’ll be the two lethal injections implantedin the arteries in his neck, set to go off if he doesn’t return home in time…

Kurt Russell equips himself perfectly as the hero with witty one-linersand a devil-may-care attitude, although he has the determination to see the jobthrough – then again, faced with the alternative…

It’s sad that two of the cast are no longer with us, namely Lee Van Cleefas Hauk and Donald Pleasance as the President.

Elsewhere in the cast is Isaac Hayes as the evil ganglord of New Yorkknown as The Duke. These days, however, he’s taken on a role that’s just assmooth – the voice of the singing chef in Sky TV’s South Park. HarryDean Stanton has made a living out of roles in bizarre films such asRepo Man and Wild At Heart, but those who are not hitting thebig-time these days are Season Hubley and Adrienne Barbeau.

The print is watchable but has a few artifacts that aren’t particularlynoticeable when sat down on the couch. It also loses a point for not beinganamorphic when it’s standard practice for BMG to release 16:9-enhancedanamorphic versions in Germany, often with plenty of extras.

Thankfully, the film is presented in its original widescreen ratio of 2.35:1which is the only way to watch this film and not the “Original ratio 1.33:1″as quoted on the back of the box which is wrong. The average bitrate is a good5.97Mb/s, occasionally peaking over 7Mb/s.

The sound quality is superb too – mainly for incidental music, not least theclassic theme tune, but also atmospheric music some of which is used to pinpointkey moments and a number of directional effects including Snake’s fight in thering and his foray into Broadway with his colleagues. It is presented inDolby Digital 2.0 (Dolby Surround).

Extras : Chapters :The disc is well-chaptered with 27 covering the film, the last being savedto keep the end credits separate. There is no theatrical trailer includedthough. Languages & Subtitles :

The film is in English only, with no subtitles. This seems to be the case forall of the current batch of BMG releases.

Misleadingly, there are sections labelled Special Effects, Making The Filmand The Edit, which make you think we’ll be introduced to pieces offootage on how the film was put together, instead of the handfuls of pagesof brief information that we’re given instead.

The menu mirrors the computer system at the film’s opening when it explainsthe situation in New York, with computer-like clicks and bleeps and somesubtle animation.

For some reason, there’s no “Play Movie” option. If you’ve already been viewingpart of the film and have come back to the main menu, “Return To Movie” willtake you back, but to start the film from scratch, you’ll either need toselect the first scene yourself, or reboot the DVD altogether since it willbegin after the copyright info has been displayed.

Overall, this is a great film but the lack of an anamorphic transfer is shame,as is the fact there are so few extras and it faces strong competition from theNTSC Special Edition Laserdisc which contains an interview with John Carpenteras well as a commentary track.