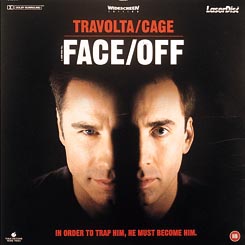 Anyonewho’s sat down and watched this in full screen on video willknow that it’s one of those 2.35:1 movies unwatchable in any other form.Here, though, beautifully transferred in all its widescreen glory,Face/Off is a real treat. An original screenplay by Mike Werb andMichael Colleary happily landed in the lap of John Woo, an unknownquantity as far as the two screenwriters were concerned but the perfectdirector for what they’d written.

This might be Woo’s third theatrical feature Stateside, but it’s reallythe first to near the quality of his better Hong Kong movies. Even itstitle Face/Off recalls a major theme from both The Killer (1989) andHard Boiled (1992) – the two adversaries who bond in a stalement staringdown the barrels of one another’s guns. Travolta as an FBI man isdetermined to catch Cage, a ruthless master criminal responsible forkilling Travolta’s young son. In a ludicrous but emotionally effectiveneo-science fictional conceit, Travolta borrows Cage’s face in a literalface off to enter a prison as Cage and extract the whereabouts of asoon-to-be detonated bomb from Cage’s inmate brother.

Unfortunately for the FBI man, the criminal comes out of his coma andsteals the FBI man’s face, leaving the former stuck in prison while thelatter goes off to sleep with his wife Allen (The Ice Storm) and ogglehis teenage daughter Swain (who played the title role in Adrian Lyne’sLolita). The FBI man must escape from prison and find a way to revealhis nemesis’ true identity (all traces of the covert op face swaphaving been destroyed by the villain). Woo, arguably the world’s greatestaction director, pulls out all the stops in his choreography, yet neverat the expense of the characters: while the result is high on bothbullets and body count, it also packs an emotional wallop that maysurprise those unfamiliar with Woo’s Hong Kong canon.

If the disc boasts no extras – not even a trailer – in terms of themovie itself it gets everything right. Virtually no shot fails to employthe letterbox frame and if a few minor details suffer from slightpicture side loss, (an early computer screen springs to mind), most ofthe time all the essential details can be seen. So no qualms there.

The sound is a joy, although this is one of those movies where quiet,subtle passages (like the opening carousel assassination attempt withits unsettling, edgy musical score) are followed by extremely loud,noisy passages (the airport car/plane chase and warehouse fight a coupleof scenes earlier) that mean that you may well find yourself constantlyturning up then turning down the volume so as not to annoy other membersof the household.

As to aside breaks, they’re beautifully chosen in nice, unobtrusiveplaces. Whoever decided exactly where these should go deserves fullmarks.

All of which means that, although this platter doesn’t pull out all thestops it might have done, it remains nonetheless a more thansatisfactory PAL laserdisc of a terrific movie which deserves to sellwell.