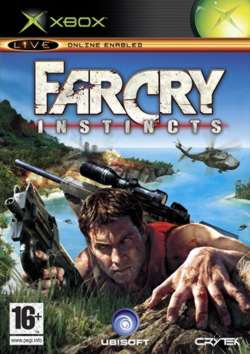 Far Cry Instincts begins with you as Jack Carver, voiced by Stephen Dorff, trapped in the wrong place at the wrong time – something we’ve heard before in games.

In this case, you’re on a desert island and are meant to be taking in the sights of war-era shipwrecks with travel reporter Val Cortez, except that a couple of military choppers show up and blast you into next week while Val gets captured. The aim of the game is survival – hunt or be hunted… 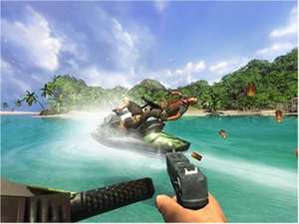 This was a game I was really looking forward to after the reviews I’d read of the PC original, Far Cry and it’s taken a massive 18 months to come to the Xbox, under a slightly different moniker.

As I began, this game felt a bit like how good the searching about for items was in 2000’s Thief II: The Metal Age was, plus similar stealth to last year’s Manhunt, as you creep up on the baddies, either by crouching or lying on the ground and approaching them very slowly. And all of this happens as you get from one impressive jungle environment to another with checkpoints to mark your progress – and that’s the only way you’ll save your game.

Alas, before long, the rot starts setting in and it really feels like a journey I’ve been down far too many times before. First up, the AI is rather lacking, making it play like 2002’s Command and Conquer: Renegade and that same year’s Return To Castle Wolfenstein, the latter of which was good for its time, but nowadays things have moved on but all still made me ask the question – why do baddies always stand so close to explosive barrels in video games?

As for the stealth aspects of creeping up on someone, again this is covered much better in the Hitman series, an absolutely outstanding one at that. 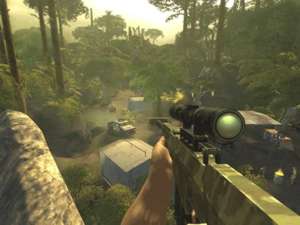 To continue, some baddies take several bullets to be hit by before they even react, let alone die. Even a simple headshot doesn’t always take them out. And when I blew up the armoury, in one early section, and then got out like it told me to, sometimes it didn’t even go off! Yes, I tried it a few times more but that’s because I’d been shot and had to repeat that section.

I understand that a bit further on and Jack would develop feral abilities, but before long I simply didn’t care. I just knew it wasn’t going to change for the better after that because so much emphasis had been given to the graphics that not enough attention has been thought to how it should actually play.

While Far Cry Instincts looks gorgeous, particularly with the lighting and water effects, the graphics sometimes have a short draw distance, often exhibiting this right before your eyes, which is a niggle. The sound, however, is just about faultless – the Dolby Digital 5.1 replicates the environment perfectly whether it’s shooting and explosions or the quiet twittering of birds in the background. 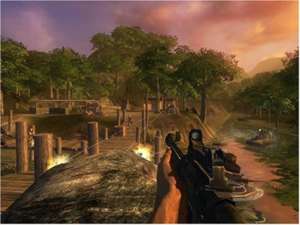 Overall, it feels a bit of an empty experience, which is a shame because it’s not what I was expecting and the fact you don’t know who’s threatening your life with those big choppers just makes the whole thing seem a bit pointless. Following the hype, it’s even more disappointing than Half Life 2.

To make matters worse, this is one of those games that Hollywood is looking to turn into a movie. Please don’t. Even when they get it right, these things always work better as a game – just look at the difference between the 2004 Chronicles of Riddick game and the film.

And to add insult to injury, it’ll be directed by Uwe Boll, who previously went to work on House of the Dead and Alone in the Dark, he’s completed work on Bloodrayne starring Terminator 3‘s Kristanna Loken, and has also announced game-to-film versions of Hunter: The Reckoning and Fear Effect.

Review update:
I’ve now played Far Cry Instincts for longer and thus have been looking at it with fresh eyes. I can see that the feral ability gives you super-strength and super-jumps, but even after indulging in this it’s a feature that’s fun at first but it feels better to thump someone normally or get in a car and run them over.

The game still has the same playability problems though. Hence, I may play this for longer now than I would’ve done originally, but despite the great-looking graphics, I’ll still not be thinking the “WOW!” I was expecting to do.