Going Off Big Time Yesterday, they were just
shooting their mouths off…
Distributed by 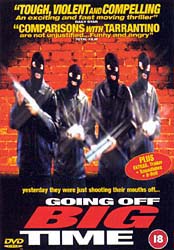 Fate plays a strange hand and the one dealt out to Mark Clayton (Neil Fitzmaurice) is a definitely shitty one as a chance encounter catching thief Kenny Galon (Sean McKee, who’s probably best known as Rod ‘the plod’ Corkhill’s best mate Jamie Henderson from 1987-89), results in no less a commendation than a violent threat. One slip up later and Clayton finds himself in prison getting in with the wrong crowd and ultimately finding himself amongst the gangster clan, despite starting off completely the opposite side of the tracks.

In prison he meets old stalwart Murray (Bernard Hill), the care-free but over-zealous Ozzi (Dominic Carter) and the one who’s the butt of most jokes, Flipper (the excellent Bolton comedian, Peter Kay). The nasty ones include one man you definitely would not like to meet in a dark alley, particularly when it’s your own (!), Ali Bowers (Colin Culross) and there’s a cameo for Jack Marsden, who played bad-cop Danny in the first series of The Cops, but here he’s simply known as Prison Bully.

Special mention goes to the gorgeous Smack The Pony blonde Sarah Alexander as Clayton’s solicitor Stacey Bannerman and the person he pours his heart out too when he gets into trouble at the start of the film and tells her his story which we see in flashback about how his life got into such a mess.

I wasn’t expecting a great deal from this Brit-flick from debut director Jim Doyle, but I did come across a real find in a film written by its principal star which managed the perfect blend between wry humour and strong drama, changing horses mid-stream to catch you out and capturing compelling moments with engaging direction and well-rounded characters.

The film is presented in the original theatrical ratio of 2.35:1 and is anamorphic, but then again I don’t think it got much in the way of cinema screenings which is a shame. There’s a slight tinge of grain that mars the picture but it’s not particularly noticeable from the normal viewing distance. The average bitrate is a fairly steady 5.61Mb/s, occasionally peaking over 8Mb/s.

Thankfully, EiV have kept the Dolby Digital 5.1 soundtrack which is clear for dialogue and packs a punch when guns go off on the outside or violence erupts both inside and out. Dialogue is in English only.

The extras on the DVD last a mere five minutes with a 2-minute Theatrical Trailer in non-anamorphic 16:9, Sound Bites which are short pieces of interview footage shot by the North West’s Granada Tonight and a 60-second B-roll of work-in-progress footage, this time strangely having commentary over the top and from a woman who doesn’t sound particularly thrilled about it.

Subtitles are noted by their absence (boo!), chapters are few with 16 and the menus are static and silent.

Definitely a DVD to rent, but only worth buying if you’re to watch it time and time again since there’s not much else upon the disc for your twenty notes.

I do with EiV would lay off the excessive quoting from other sources who liked the film. Plus, I’ve never heard of this “Tarrantino” bloke. Is he in any way related to Reservoir Dogs director Quentin TaRantino?