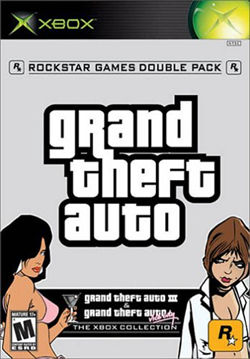 The transition from top-down 2D to full-on 3D in the GTA series was like comparing mono to stereo and comparing black & white telly to colour – it really was that impressive. And now here we finally have the two greatest and most recent games in the series with the Grand Theft Auto III/Vice City Box Set.

Since I’ve already completed ‘3’, but have yet to make it all the way through ‘Vice City’ (why rush it all at once when I can spread the pleasure out?), it was the latter I spent more time on for this review. 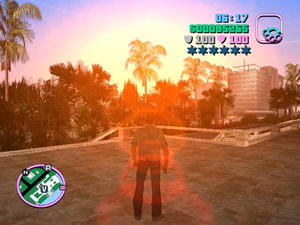 First of all, you’ll start playing GTA3 doing jobs for Luigi and Joey to earn money, but soon you’ll find other missions to take, some from an occasionally-ringing phone box, all which boost the coffers upon successful completition and the hidden packages placed around town will provide you with a new weapon for every ten packages collected.

And it doesn’t stop there. Earn money by jumping into one of the many taxis and doing a Crazy Taxi, re-live the days of Chase HQ by stealing a police car, attempt to save people by nicking an ambulance and help others in a pilfered fire engine. The ambulance falls over too often though and it’s more fun to take the cop car option but there’s no music in them. Surely we could’ve been treated to the Blues Brothers soundtrack? 🙂

Other hidden challenges include “Patriot Playground” – pass through 15 checkpoints quickly (I failed) when stealing a certain jeep and I had some fun at one point when I ran an ambulance off the road then watched as it tried to get back on up a steep embankment and over a wall. It completely failed and kept falling backwards. Also, another time when my vehicle exploded, a passing car kept driving along despite having caught fire, making it hilarious to watch it drive up a hill and eventually explode itself! 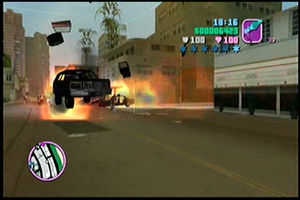 For Vice City, it’s 1986, and without being able to say “Miami Vice”, they’ve recreated the look with Ferraris, expensive one-colour suits or Gordon Gecko-a-likes and the music – YES, the music. I was a child of the 80s and, at the age of 14, 1986 was a time spent playing ZX Spectrum games like Quazatron and listening to Level 42 and Jean-Michel Jarre’s Oxygene album. Aah, those were the days, and not a Mary Hopkins number in sight.

About the 80s music featured here, choice cuts include INXS – Kiss the Dirt, Mr Mister – Broken Wings, Laura Brannigan – Self Control, Michael Jackson – Billie Jean, The Outfield – Your Love… the list seems almost endless, given that a 7-CD boxset is available with all the tunes from the game on them for £29.99, and the Xbox version improves upon this by allowing you to use tracks recorded on your Xbox hard drive and these appear as the ‘tape’ option.

You continue your role as Tommy Vercetti, sent to Vice City, by your old boss Sonny Forelli, without a cent to your name. The idea is the same – complete a variety of missions, whilst stopping to steal cop cars and play vigilante, steal a taxi for a spot of Crazy Taxiing, or just killing people for a laugh and nicking their money. You know the drill.

Now onto the good and the bad things about this release – it does contain the same flaws as the PS2 version, such as when you turn round and cars and pedestrians disappear. You’d have thought that with the space on the Xbox’s hard drive that this problem would’ve been eradicated.

Also, despite the cool tunes and the ability to include your own, occasionally I found while reversing in a car that there’s a lot of noise going on and you get white noise. It does go away after a while but it certainly doesn’t seem intentional and it certainly wasn’t there on the PS2.

I’ve taken some screenshots from the game myself, such as the cool explosion (above-right), the flash cop car chasing the regular one I stole (right) and when we both hit the ground (below-right). I really wanted to record some of my stunts to DVD and capture them for placing links from this review, but can’t find a way to do it without creating huge .avi files of several megabytes which would cripple my bandwidth allowance.

The game also crashes in a similar fashion to the way the PS2 did – get into a big car chase, or obviously something too complex for it and the whole thing just hangs. It only does this very rarely, but it’s still an annoyance and certainly not something that a game that spent an extra year in development should have avoided, but then since it mirrors other mistakes the PS2 game made was it just a port-over with the graphics tarted up? 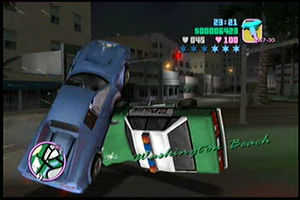 At first, the controls seem awful – ok, so you don’t have two shoulder buttons on the Xbox remote but at the very least they should’ve been made customisable! Several times I’ve had to stop and work out what to press, thus losing valuable seconds and screwing the game up. One of the hardest things to do is dry-by shootings whether using the ‘standard’ or ‘classics’ settings. It’s just impossible to concentrate on these whilst driving at the same time, often finding yourself either letting go of the wheel in ‘classic’ mode, or continuing at full speed in ‘standard’, such is the positioning.

This means it’s easy to accidentally leave your car when you’re on a mission due to the placing of the buttons.

That said, after I’ve spent nearly a month having a good crack at it, and despite all the problems – and that it’s only graphically a step-forward from the PS2 version – overall, I would’ve said that the playability of that earlier release makes it the choice of the two, but I’m becoming accustomed to the Xbox version now, even though it means I’ll have to re-complete a stack of missions I did on the PS2 in order to complete it on the Xbox.

If this review seems at odds with the scores, then that’s because it should be seen as a companion piece to the PS2 individual reviews of III and Vice City, and while, despite its faults, the game is still as addicitive as being drip-fed narcotics (not that I’ve ever tried) – since it’s probably the most addictive game series since Doom/Quake in the 90s – it still has all the same flaws of the PS2 version which could’ve been ironed out and it would’ve been a classic in that respect, but it looks like it’s just been ported across and had the graphics tarted up for sharpness (and not the problem such as people disappearing when you turn 180-degrees and then back again, for which the PS2 had the excuse of not having a hard drive).

It’s just that, compared to almost every other game out there it beats them hands down, but compared to itself on the PS2 console it’s a disappointment that they haven’t addressed the flaws.

And, of course, when the next sequel is released, Xbox Live online play HAS to be included!