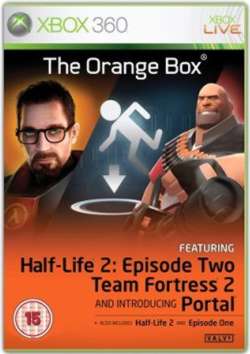 Half Life 2 is just one of the five games in The Orange Box, and if you’ve not played the main title, or last year’s PC follow-up Episode 1, then you’ll be playing at this package for a hell of a long time.

Firstly, while I played both of those two titles on the PC and this compilation is also available on that format, as well as the PS3 – albeit delayed until December 14th (check link above in case it slides again), I was pleased to play it on the Xbox 360 because it has none of that ‘Steam’ nonsense which seriously hindered the fun in Episode 1 (plus the 2006 title, SiN Emergence: Episode 1). These two games will also now be in HD for those with the relevant equipment.

In Half Life 2: Episode 2, which is the main game you’ve all come to see here, both City 17 and the Citadel has gone, the Combine are trying to get reinforcements together and your first task is to get to the resistance base at the White Forest. At the end of Episode 1, you and Alyx stole the transmission packet which the Combine send at the sacrifice of the Citadel and details information about the Combine’s homeworld and allows the creation of their superportal to be controlled from the other side… which obviously they’d rather you didn’t know about.

Okay, there’s a lot of blah-blah-blah in there but the main question is – is it as much fun to play as the previous entries in the series? Hell, yes! When you load in this latest entry, you’ll know what to expect and you’ll get it, so after being treated to a brief summary of the main experiences from Episode 1, it’s on with the action from the moment where the train, in which you left the Citadel, crashes with a massive thud and when the portal storm kicks in (see right), you’ll be glad you didn’t buy a National Rail Super Saver Return(!)

As I type, I’ve still got a way to go in this entry, but from the clips posted in this review, to which I’ll add more as I progress (Subscribe to my DVDfeverGames Youtube channel), you can see just how fantastic the game is. There’s lots of little centipede-like creatures which can be shot or walked over to squash ’em and give you some extra health, but the way they make a shrill noise like a banshee rolling its “r”s gives me a shiver down my spine!

More antlions and other nasty creatures as can be seen from the footage – and one of my favourites is the suicide-bomber zombie – and you will be having great fun with the gravity gun. As you progress, as usual the game will autosave as using HL2’s save-anywhere feature if that’s your choice.

Go to page 2 for more thoughts on the game.