Hellboy Give Evil Hell.
Distributed by 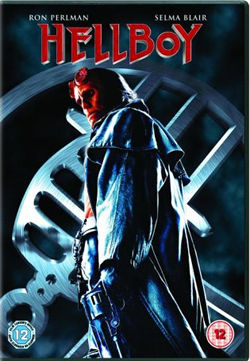 (based on the character created by Mike Mignola)

After my enjoyment of Blade II, I looked forward to Hellboy, but while there’s some fun to be had along the way it’s ultimately disappointing.

Created by Mike Mignola for Dark Horse Comics, we learn that Hellboy arrived through the portal opened up by the Nazis on October 9th, 1944, when they dabbled in the occult and black magic in a bid to win the war, but were interrupted by the US Army, accompanied by a young Professor Broom (Kevin Trainor). The portal was closed, but it was feared something had come through and Hellboy was that product.

Sixty years on and now aged 88, Professor Broom (John Hurt) works at The Bureau of Paranormal Research and Defense where he keeps an eye on Hellboy (Ron Perlman), aka ‘Red’, and Abe Sapien (performed by Doug Jones but with the voice of Fraiser‘s David Hyde Pierce in an uncredited role), aka ‘Blue’, who go out into the world only to rid it of evil weirdos and bizarre creatures.

The ultimate aim for Rasputin (Karel Roden, also seen in last year’s The Bourne Supremacy), and his female companion, Isla (Bridget Hodson) is to open the door to Ogdru Jahad – the Seven Gods of Chaos, as then there’ll be no going back for the Earth. This is only one of the problems Hellboy has to deal with, but while there are fantastic special effects, building on del Toro’s CGI in Blade II, starting with our hero’s fight against the first of the breed known as Sammael, when it comes to finally killing off the enemy and dealing with their biggest intentions it comes across as surprisingly easy, and that’s when you feel a bit cheated as you’ve been waiting for a pay-off that doesn’t really come. That hasn’t stopped a sequel being planned.

Of the rest of the cast, Liz Sherman (Selma Blair) stopped working at the agency and ended up in a mental institution after a fire-related incident, the nature of which I won’t divulge here as it would be a spoiler, her leaving being much to Hellboy’s annoyance as they were an item. That said, it’s no spoiler to state that she’s underused in this movie, but then she’s not much of an actress anyway. Rupert Evans is the new boy starting at the Research Dept and discovering all the weird things on his first day, while Jeffrey Tambor plays the archetypal know-nothing suit.

Hellboy is pretty violent for a 12-cert, but no doubt it got lower than a 15 because of its fantasy origins.

The extras span two discs and are as follows:

And that’s the lot, although note that there are a couple of other things that have been rated for a “Director’s Cut” DVD on the BBFC website that haven’t made it to this disc, such as a Q&A Archive at the Comic Con 2002, a featurette about comics from Scott McCloud and a disc 3 introduction by Ron Perlman.

Disc 3? There has been such a release in the US, so when will it come out here?

The menus blend in well with the theme of the film, which is good if you actually enjoyed it, there are subtitles in English, Italian, Arabic, Bulgarian, Croatian, Greek and Hindi, and the main feature is divided into 28 chapters.

The subtitles go a bit wonky in a couple of scenes: halfway through as Hellboy deals with a second Sammael, with some red appears over some of the subtitles, while it happens again when they finally deal with the Sammael for good, towards the end.