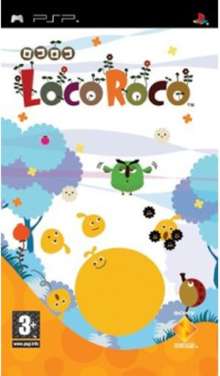 On BBC4’s Screen Wipe, Charlie Brooker referred to Loco Roco as something that looked like obscure Spanish animation from the ’70s, while also praising it to the heights. He was right on both counts.

This is an incredibly strange game in which, as shown on the cover, you play as a LocoRoco, looking rather much like a space hopper, with the aim to collect orange fruits in order to get bigger, expanding on the number of small LocoRocos you hold inside. You get about by tipping the world left and right courtesy of the PSP’s shoulder buttons. Hold these down together and then let go to make your character jump as you ‘shake’ the ground.

Yes, I mentioned the small LocoRocos and if you tap the ‘circle’ button then lightning strikes and your one unit becames several little ones – essential for getting past certain parts of the terrain but make sure you rejoin back together (hold down the ‘circle’ button until this is complete) otherwise the little ones can get left behind and snaffled by a greedy spider, an insect that will also chase after you in some locations but if you’re rolling and jumping along then a quick headbutt will sort him out. 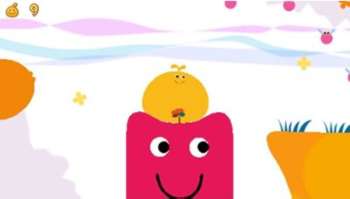 The first thing that is guaranteed in Loco Roco is that I have absolutely no idea what is going on, and you’ll no doubt feel the same, but also strangely captivated to continue throughout the five worlds, each containing 8 stages because it’s, quite simply, as cute as hell 🙂

You’ll frequently come across purple and orange Nyokki (there may be other colours but I haven’t met them yet). The purple ones have to be woken up by breaking up into little LocoRocos and singing to them before they move, while the orange ones (right) raise you up in the air when you sit on their face, all of which looks a bit ‘nudge-nudge-wink-wink’ when you do it, especially since as the Nyokki raises up in the air he looks surprised instead of giving his usual smile…

As you continue your journey you’ll get the chance to pick up Loco House parts – the use for which I’ll explain later, either by finding secret hideaways along the way or by singing to other very strange creatures in a similar way to the one above. You’ll be prompted as to how many Locos you need for the job each time. 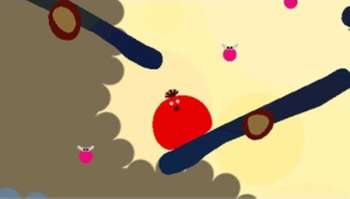 The screenshots shown here look pretty simplistic but it’s the way it plays out which draws you in and doesn’t let you go. It’s clever the way the camera pulls out when there are LocoRocos all over the place and then zooms in when appropriate so it can fit them all onscreen at once. You can also take photo stills throughout the game for viewing later from the main menu. In addition, there’s a nice touch when you split into several units as some levels have a section that look like the old ’80s real-world game favourite Downfall with its cogs turning.

Loco Roco contains many incessant and very catchy tunes in all levels and the gameplay is such that you find yourself tipping the PSP to the side even though that makes no difference whatsoever. I guess that’s the kind of thing Nintendo want us to do with their Wii but I think their plans are expecting all their customers to be more energetic than the average console owner. Either way, make sure you don’t go for a drive after playing this game as it makes your head feel a bit like it’s spinning! 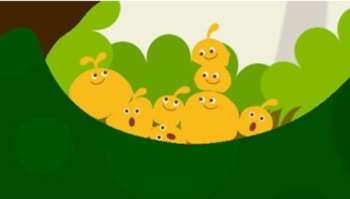 At times Loco Roco feels like an early Sonic The Hedgehog game, but with enough of a unique feel to sustain interest throughout the game-playing. Bear in mind, though, that while the important stuff in the game is in legible English, there’s still a lot of language in there, both as text and spoken, which is all in Japanese so perhaps I can figure a way to insert Talkman into the PSP at the same time? 🙂

From the main menu you can make your own Loco Roco house out of the parts you’ve accumulated so far for all your little Locos to live in. This is just a bit of fun more than anything else as it comes across like someone’s had a strange accident with Microsoft’s Paint. The main theme from this game also plays throughout this segment and it sounds like the Mini Pops meets Pinky & Perky.

There are options to also play a couple of demo levels, either on your own or co-operating with a friend via wireless multiplayer and three unlockable mini games, starting with ‘Mui Mui Crane’, which plays like one of those 10p seaside funfair machines where you move the crane across and press a button when you want it to drop, in order to pick up a LocoRoco which will then be put in your house.

Overall, Loco Roco is both massively bizarre AND essential.