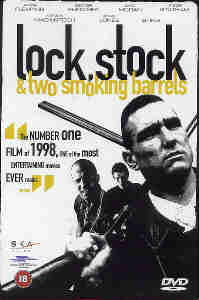 David A. Hughes and John Murphy

Lock Stock And Two Smoking Barrels is the British hit film from last year, the feature-length debut for director Guy Ritchie, which gained plenty of press attention for providing another debut in the guise of ex-footballer Vinnie Jones as debt collector Big Chris. However, to pinpoint only one aspect of this film doesn’t do the rest of it justice.

Tom, Soap, Eddy and Bacon are four young men in their mid-twenties who could do with some serious money, which isn’t easy to come by. After a lot of saving up, they’ve brought together £100,000 which Eddy will use as his bargaining power in a game of poker with violent gangster Hatchet Harry and his associates.

Before long, their dreams turn sour and the rigged card game puts Eddy in serious debt with only a week to find the money to pay him off. Not an easy task, but it’s worth noting – for them – that their local loan-shark lives just next door and a break-in may be the answer. To go any further into the plot would rob its surprising twists and turns, suffice to say that it involves rival drug gangs, sharp comedic lines and unexpected shock events, so much so that to this reviewer it makes this film Britain’s answer to True Romance and Pulp Fiction.

There’s also a wealth of talent involved such as Dexter Fletcher, best known to TV viewers as Spike from Press Gang, rising star Nick Moran as the not-so-card sharp, Steven Mackintosh as one of a group of flatmates who don’t have to go shopping for drugs because they grow their own marijuana in-house, pop star Sting – one of the few singer/songwriters able to act well in interesting roles, one-time Lenny Henry sidekick Vas Blackwood cast against type as one of the most menacing and violent men you’d never want to come across, Victor Maguire (aka Jack from Bread) and Mark Mooney as two small-time criminals who accidentally find themselves mixing in with the big-time crowd, there’s a cameo from Danny John-Jules (aka Cat from Red Dwarf) as a barman and the theatrical debut for ex-footballer Vinnie Jones.

In addition, there’s dialogue in this film to put it on a par with the excellent Trainspotting. Approximately 82 minutes in, after the main four return to their flat to find it broken into, all their loot and dope stolen and the front room in a post-shootout situation, three of them discuss :