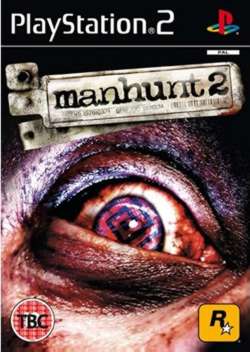 I thoroughly enjoyed the original Manhunt on the Xbox, but I can’t fathom out why Rockstar have brought out the sequel only on the PS2, Wii and the PSP?

While I can understand the Wii, even if I don’t go for such energetic use of a controller myself, and it’s great to see some support for the PSP given that most developers appear to have abandoned it over the last year, the graphic gore would’ve been ripe for a release on the Xbox 360 and PS3, surely?

Manhunt 2: Level 1:
Awakenings Part 1
Still, it’s great to see it make it to these shores at all after the BBFC were complete arseholes about it for months on end. In fact, the US have had this game for a whole year before we got it.

The basic premise here is that things have gone very wrong at a secret research facility. You play one of two surviving inmates, Daniel Lamb, and you’re on the run with the other one, Leo Kasper. Naturally, the powers that be want to stop you before you can tell the world about what they’ve been up to for the last six years. For some reason, a female doctor in a white coat falls to the floor in front of you, seemingly, dead at your hand via the contents of a syringe.

What to do now? Where to go? Anywhere but here, for sure!

And so begins the game as you make your way through the dank corridors, following a linear path as with the first game, but being able to kill and maim in whichever order you see fit. Sadly, there’s also a series of problems with the game and the one thing that kept me playing is the amusing voicework of the others in the game, such as when I could hear one of the “Watchdogs” chase after me, shouting, “Face… meet fist!”

However, since the game’s on the PS2 the graphics are nowhere near as great as they could’ve been – as the footage shows – and while the original had sound in Dolby Digital 5.1, the PS2 can only manage Dolby Surround (it states ProLogic 2, but it’s not a patch on what DD5.1 or DTS could’ve done and DTS is certainly possible as GTA Vice City proved – and why they never used it in the San Andreas sequel, god only knows).

Manhunt 2: Level 2:
Ghosts
Turning round can be difficult as your guy just doesn’t seem to respond properly when looking with the right controller stick. It’s reasonably okay to move with the left one but you need to be able to turn so you can check an enemy walking past while you’re in the shadows so you can leap out at them. Further playing showed that the right stick is merely used for the occasional looking left or right – even though the left one can do that if you’ve got your back against the wall, and the default for most games that allow you to run about an area is that the left stick controls movement whilst the right one allows you to look.

Baddies aren’t very bright, either. I could lead them back and forth between the same dark places I was hiding in and they still didn’t realise! Whilst hiding in shadows, you may occasionally have to press a button, as instructed, to make sure you stay undetected.

Plastic bags feature in this game again, as implements of death-dealing, as do knives, ballpoint pens, guns and bricks. Well, bricks don’t kill them but they incapacitate them temporarily so you can wade in and give them a good kicking. You can also perform “jump executions” by jumping down from a high spot, such as a roof, onto a baddie when told to do so, in order to carry this out.

Manhunt 2: Level 3:
Sexual Deviants Part 1
Overall, this sequel is very disappointing. It has been released too late, it fails in the departments that made the original great (both video and audio) and any playability issues from before haven’t just not been ironed – they seem to have got worse. These are issues which could – and should – have been addressed.

Similarly, this hampers the enjoyment of the game. My review of the original game stated how much fun it was when it came to taking out a bad guy by stalking them slowly, getting the meter up to the point where it would go from white to yellow to red to increase the danger of them spotting you while also increasing the ferocity of your attack, but here you just don’t get the same buzz. Perhaps it’s the fact that as the years have gone by we’ve been able to do increasingly violent things in the GTA games, the latest release dishing it out in stunning HD, and so as the Manhunt sequel comes almost five years after the original one, a lack of development and progression proves to be its downfall.

Oh, and that’s not forgetting the fact that this game is also in its censored form! As the kills are carried out, the picture keeps going black and white and other bizarre effects that serve to irritate, rather than being full on gore. It’s really turned out to be rather a missed opportunity.

In this review, I’ve uploaded a number of clips which are as follows: