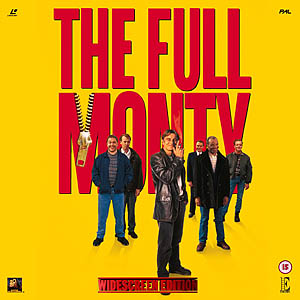 The Full Monty doesn’t really need much introduction after its staggering success, but for those who have missed out so far, it’s the tale of a group of Sheffield steelworkers who, these days, know more about the dole queue line than the production line. After seeing that half the female population of the city are cramming into the Men’s Club to see The Chippendales strip, one of the group, Gaz, makes many a discouraging remark to the queue outside. At Jobclub the next day, discussion leads him and the rest to realise that there thousands of pounds to be made just by “taking yer kit off”.

Auditions to complete the line-up begin and as time goes on, the gang prepare for the big night but there’s plenty of scope for set-backs threatening to stifle our heroes from achieving their goal.

On first viewing, this film was one of the funniest and most gag-packed films I’d seen in a long time with more one-liners than you can shake a stick at. On subsequent viewings it still ranks as one of the best as you’ll pick up on other jokes that you missed first time round and those that caught you by surprise first time are just as hilarious, especially chapter 15: “Hot Stuff at the D.S.S.”. There’s also room for dramatic and emotional moments which also work well between the comedy.

Talking of surprises, this one did that for everyone when it became the biggest British film to date and from it’s release in August 1997 it never left my local cinema for over six months, still taking money after the video had gone on sale, eclipsing the record set by Four Weddings And A Funeral by a mile by raking in more than £50 million at the British box office, coming second-only to 1997’s Men In Black and taking more than the sci-fi smash hit Independence Day.

The film not only won the BAFTA Awards for Best Film and Best Actor (Robert Carlyle) but was nominated for four Oscars and won one: Anne Dudley, formerly with The Art Of Noise in the 1980’s, for Best Original Musical/Comedy Score.

Topping the cast is the versatile Robert Carlyle as Gaz who is facing losing custody of his son Nathan (William Snape) and needs some money fast to clear his arrears of maintenance. Carlyle is one of the best actors of his generation going from easy-going characters such as Gaz and Hamish MacBeth, to complete nutballs such as Begbie in Trainspotting and the murderer Albie in the Hillsborough-themed episode of Cracker: To Be A Somebody.

Other well known faces include Tom Wilkinson as Gerald, who can’t face his wife with the truth that he was made redundant six months ago; and Paul Barber, one of the regulars from Only Fools And Horses. Mark Addy is also making a name for himself having appeared in BBC1’s “The Thin Blue Line” opposite Rowan Atkinson and the BBC2 comedy series Sunnyside Farm” alongside Quadrophenia‘s Phil Daniels, with plenty of one-liners as he ponders his large girth, “Anti-wrinkle cream there is, but anti-fat bastard cream there isn’t!”

Steve Huison plays Lomper, the ‘Billy No-mates’ of the cast with only a sick mother for company; and Hugo Speer plays Guy who goes for an audition to be a stripper. He can’t sing or dance, but when asked what he can do, he drops his pants and everyone remains silent until Gaz remarks, “Ladies and gentlemen… the lunchbox has landed (!)”.

There’s also a cameo for Bruce Jones aka Les Battersby from Coronation Street”, not to mention his appearances in Raining Stones and the acclaimed Twentyfourseven who auditions too but fails miserably.

One of the best things about this release is the excellent transfer – a pin-sharp widescreen 1.85:1 transfer. When this title was first put on the ‘Coming Soon’ list by Encore it was more than likely going to be a fullscreen transfer, the prospect of which I was not relishing when I saw the video released earlier this year as then pan-and-scanning on it is so bad that it makes it look like the film was shot in Cinemascope because there’s so much to-ing and fro-ing with the camera. Thankfully, this laserdisc puts everything back in the right place with the perfectly-composed original cinematic ratio.

The sound quality is superb as well. Dialogue is clear and the pumping soundtrack belts out classics from Gary Glitter (Rock N Roll Part II), Steve Harley And Cockney Rebel (Make Me Smile (Come Up And See Me)), Donna Summer (Hot Stuff) and not forgetting Hot Chocolate (You Sexy Thing).

There are 26 chapters spread throughout the 88 minutes of the film which covers all of the main scenes and it also contains two original theatrical trailers afterwards. The side-break is well-placed at 61:50 into side one where the lads get into a bit of bother with the law, which allows side two to be encoded in CAV so you can search for the perfect still-frame on the ‘big night’ if that takes your fancy…

Overall, what more could you ask for from twenty pounds than one of the best films of 1997 with perfect sound and picture ? If you’ve not caught up with ‘Monty mania yet, now is the time.