PaRappa The Rapper for Sony PSP
Distributed by
Sony 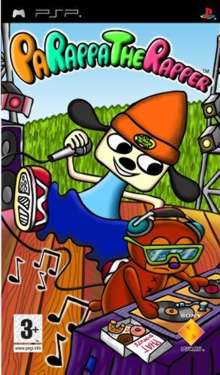 It’s PaRappa the Rapper and, once again, he’s gotta believe, this time on the Sony PSP.

Anyone who’s ever own a Playstation in any form will have heard of this game and, most likely, played it, knowing that throughout the game all you have to do is keep up with the pace of pressing buttons on your joypad in time with others characters onscreen. Get it right and you’ll stay at the right end of the ‘Cool, Good, Bad, Awful’ range. Your status starts off ‘Good’, and as long as it stays within the first two then you’re fine otherwise you’ll have to repeat the level. You’ll know you’re heading this was as your teachers start to get mad as it drifts into Bad/Awful territory, but they cheer up as you get better.

When it comes to this edition on the PSP, there’s… nothing new in the main, compared to the first title that appeared back in 1996. You start off with Start off with Chop Chop Master Onion in his karate club, copying his moves in order to progress, and you have to pass each stage in order to move on to the next one, completing six in total. There are lots of cool cutscenes, although they do tend to go on for quite some time, as we see PaRappa trying to get his leg over Sunny Funny. 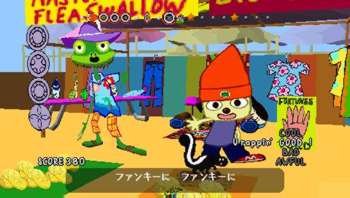 In the next level, pressing a few buttons in time to pass your driving test was a lot more simple than my own test. Then after trashing his Dad’s car, he reckons he’ll pay off several thousand pounds’ worth of debt by selling junk at a flea market. In the fourth scene, after we learn Sunny has a boyfriend who has made her a big cake with 42 tiers, you’ve got to go one better, despite having no money. How to do it? Yes, you’ve gotta believe again.

Then, prior to the final level, all of the characters have a rap contest to see who first gets to visit the only toilet for miles! The determination in your face makes Sunny Funny think you’re some kind of cool guy. On the other side of using it, she thinks you’re back to the same old guy again and is disinterested.

And then it’s on to the final level at a ‘rap-off’, for want of a better phrase. You’ll notice that the levels get harder and harder and if you can keep up you’ll progress through them, otherwise they’ll drive you to insanity. At one point there was even a cut-scene for ‘Jan, Ken, Pon’, a Scissors, Paper, Stone variant as three of the main characters divvied up birthday party duties for Sunny’s big day.

PaRappa the Rapper is difficult to get to grips with, at first, pressing the buttons at the right time and it’s not at all forgiving. The levels also do go on a bit when you have to repeat them, as you just want to get down to the button-pressing, the final level particularly being annoying when the intro goes on forever. That one also causes much gnashing of teeth towards the end when you don’t get a lead-in from the MC King Kong. That’s not just difficult, it’s plain irritating! 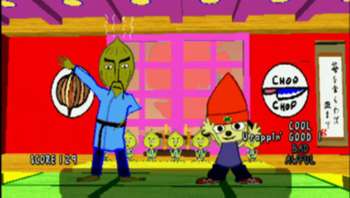 Graphically, there’s no anti-aliasing so the old PS1 sprites are now showing their age. In fact, it’s just a straight port with no touching up, which is a shame. One thing added is an option to choose between 4:3 and 16:9 screen ratio, although this is a complete waste of time because it’s a 16:9 screen so why would you want to crop the sides and look at small images of the characters filling the space instead? Also, the game was 16:9 to begin with, so there’s no point to this.

On the plus side, the game has great stereo sound separation, and my particular favourite was the toilet level (see this Youtube link), although if you want something bizarre, try out this ‘real’ level 4 clip, which normally features the chicken making a cake.

For those who want to have more than a solitary experience, the Ad Hoc Multiplayer option allows you to connect with other players who have the game, competing against them, such that you can sort-of go head-to-head, except that it will just take each player through each stage turn by turn before you can compare the results, so not really head-to-head.

‘Game Sharing’ just sends a demo of the first level to other PSP owners wirelessly and there’s also the option to download tune remixes which you can save onto the Memory Stick, although given that the UMD can hold 1.8Gb of data, why weren’t these on here already?

Overall, PaRappa the Rapper is still a fun game to play, but you’ll complete it within a couple of hours at most and after that there’s not much to go back to, so even a penny under twenty quid seems a bit steep. If Sony want to resurrect a classic which would be fantastic to play while out and about, please bring out the wonderful Ico.