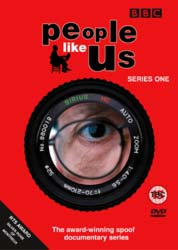 Spawning from a successful radio series, People Like Usis a classic piece of television as investigative reporter Roy Mallard(Chris Langham) looks into the world of a managing director, estateagent, police officer, solicitor, photographer and a head teacher.

To describe an episode wouldn’t do it justice as I couldn’t put across thedour, deadpan delivery of Langham’s as he keeps out of shot and offers hisopinion on the things he sees, plus the ongoing surprise as the intervieweesfind out he’s married, but aren’t surprised that he doesn’t have children.

The cast are fantastic too. Each and every episode has a batch of fineactors and actresses with perfect coming timing, such asBrass Eye‘sJulia Davis, Coupling’s Sarah AlexanderSpaced‘sMark Heap and Rescue Me’s Stuart Wright.

Classic moments, however, include the description of top-down managementor “bottom-up” management, in the first episode, as well as Roy having todo the sacking of the delivery driver, the behaviour of svelte estate agentMadeline who flirts to get a sale, and Roy’s car discussion with head teacherStuart Symonds and his secretary because it’s blocking a “Keep Clear” area:

The picture looks perfect, which is should do as it’s only three years old.All the episodes are in their original 16:9 anamorphic ratio, apart from”The Solicitor”, but after emailing the BBC at the time, and listening to thefact that the opening theme music is different, it’s clear this particularepisode was shot and edited in 4:3, so still appears in its correct ratio.I suspect this was a pilot episode as it’s the only one to have emerged in4:3. The opening visual credits are still the same but with your a WS TV in 4:3mode they’ll appear ‘squashed’ as it’s the same image and not a cropped one.

No problems whatsoever with the sound, but there’s no music during the programme,just dialogue which is perfectly clear. There are English subtitles, withsix chapters for each episode apart from the first one which has seven andthe one menu has a small looped piece of the theme music.

However, there are no extras. The back cover states “Scene Selection”, but,BBC, that is not an extra, it’s a given. The BBC don’t seem to put out manyDVDs other than in the run up to Christmas, the last memorable one this yearbeing The Hitch Hiker’s Guide to the Galaxywhich had stacks of extras, so there must be deleted scenes or interviewsaround, or in the case of this one they could’ve included an episode or twoof the radio series. But no, we get nothing.

Doctor Who: The Collection Season 8 on Blu-ray – OUT NOW!