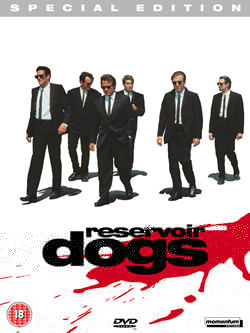 “Like A Virgin” is all about a girl who digs a guy with a big dick.

Those are the first words you hear, but isn’t this supposed to be anultra-violent heist movie? Why are they chatting about what’s in the chartsfrom years gone by? That’s because Tarantino’s script for this – and hissubsequent films, Pulp Fiction and Jackie Brown, show thateven men with guns can talk about the less meaningful things in life. Theyall have discussions about nothing just like us – it’s just that previousfilms have rarely, if ever, gone at great lengths to make their charactersseem more human and it’s all the better for that.

Note though that this isn’t a film for those who take offence to charactersusing a constant stream of strong or racist language.

The film is a part rip-off, er.. I mean “homage”, to John Woo‘sCity on Firewhich starred Chow Yun Fat, including the final four-way confrontation,but here it takes place over a weekend on which the local radio station ishaving a “K-Billy’s Super Sounds of the 70s weekend” – and all thosetracks make the soundtrack, including Stealer’s Wheel‘s “Stuck inthe Middle with You” during the infamous torture scene, which was apedin an episode of The Simpsons‘ “Itchy and Scratchy” cartoon “with guestdirector Quentin Tarantino”.

In another homage to another heist film, The Taking of Pelham One Two Three,all the characters have the names of colours to protect their own identity. 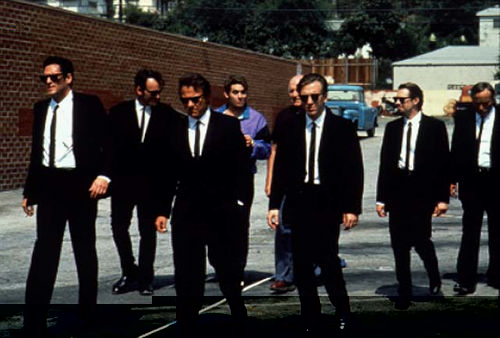 Nice Guy Eddie: “Well, no-one told ME it was a black-tie do!”

Told in flashback, six men are recruited to pull off a heist at a jeweller’sshop with a brilliant cast: the thoughtful Mr. White (Harvey Keitel),the shit-scared Mr. Orange (Tim Roth), the fast-talking Mr. Pink(Steve Buscemi) most-knowned for the fact that “I don’t tip.”,the psychopath Mr. Blonde (Michael Madsen), Madonna fan Mr. Brown(Quentin Tarantino) and the man for whom we know little Mr. Blue(Eddie Bunker).

What makes this different from other films is not only the flashback sequencestelling you what went on, since the post-opening-credits-sequence openswith Mr. Orange bleeding over the back seat of a car and Mr. White panickinglike hell, but the links between this and others with which Quentin Tarantinohas been involved.

Mr. White also used to go out with Alabama, the girl played by PatriciaArquette inTrue Romance,which was also written by Tarantino, as was Pulp Fiction and thatfilm’s Vincent Vega (John Travolta) is the brother of this film’sMr. Blonde, aka Vic Vega. Tarantino also wrote Natural Born Killers,but its director Oliver Stone rewrote it and Tarantino had his nametaken off it.

Also, although not a Tarantino link, it’s interesting to know that the womanwho put the bullet in Tim Roth’s stomach was his dialogue coach. He gets tofire back, but he wanted to have some way of getting back at the person whoforced him to perfect his American accent.

The film is presented in its original cinematic ratio of 2.35:1 and isanamorphic. Tarantino uses the full width of the frame very well indeedand it looks gorgeous throughout with no artifacts. It’s set during the dayso there are no night-time scenes bar occasional flashbacks. It looksexcellent.

Last time round we had a Pro Logic soundtrack only, but here we’re blessedwith Dolby Digital 5.1 and it fills the room with rich sound during the manysongs featured, occasional gunfire and plenty of background ambience. 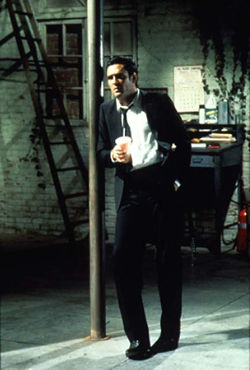 Mr Blonde figured Marvin
the cop was behind the catering.

Four years after the original DVD release, we finally get a Special Edition discwith the contents taking up two discs. All of the following are on disc 2, bar thecommentary and trailer:

So, plenty for big fans of Tarantino to get stuck into. You may not watch it all in one go,but you’ll definitely come back for more, and occasionally, repeat viewings.

The only subtitles come in English (no Dutch like the original release, but that’s nogreat loss) and the main menu featuresa mock-up of the warehouse with one character in extreme distress – and whowas so since the start, a cop who looks a bit unwell, White and Pink pointingtheir guns at each other and Mr Blonde looking on at the whole scene, all slightlymoving from side to side.

One oddity – theoriginal DVD releasehad 20 chapters. This one has just 18. How does that work?!

This a film I could watch a million times, but for the rest of you who arenew to it, after you’ve seen it for the first time and know who the rat inthe house is you can watch it again and see how the others reacted to therat at any particular point in the film.

For those who want to waste their money, editions have been released coveringone each of most of the men in the heist, but the covers just single out the’dog’ in question from the usual line-up. At least these are better than thegrotesque multi-coloured Region 1 DVDs from 2002.

And why is it called Reservoir Dogs? According to Tarantino, “Becausethey’re DOGS man.. and they’re like, from the RESERVOIR, man!”. Hmm…