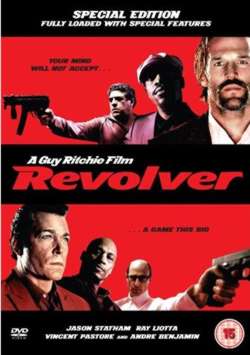 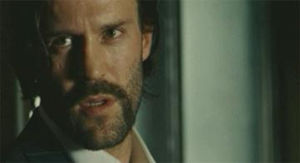 Revolveris director Guy Ritchie‘s third film followingLock Stock and Two Smoking Barrels,the one which propelled him into the big league and quite rightly so as it was a cracking piece ofentertainment with a seemingly unlikely engaging performance from Vinnie Jones and clever cameratechniques, such as blending normal speed with slo-mo, mixed in with a classy soundtrack. Since then,Snatch,which I also enjoyed, had a reasonable reception, but its follow-up, a remake of the 1974 Italianfilm, Swept Away, starring his wife, pop-star Madonna, was a critical and financial flop.

That wasn’t a film I particularly wanted to see, but given the cast in Revolver, I figuredit was certainly worth taking a punt on despite all the critics getting stuck in again and slaggingit off like there’s no tomorrow. Were they right? Well, yes and no, there are great moments to it andself-indulgent over-long pieces that should be stripped out, but what keeps your interest is a worthycast.

As the film begins, Jake Green (Jason Statham, right) is released from jail, after seven years in solitary,for not blabbing about his business relationship, of sorts, with crime boss and casino owner Macha(Ray Liotta), and then two years on as he’s got his life back into full flow, a check-up findshe has just three days to live after being diagnosed with a rare blood disease. Have ‘friends’ of Machapaid off the doctors or is he really up the creek without a paddle?

Either way, he has to spend time with loan sharks Avi (André Benjamin and Zach (VincentPastore), who claim to be the only ones that can keep him safe during this period, as well asspending a lot of his own extensive wealth that he’s accumulated since his release, thanks to themlending out *his* money.

One thing Jake has learned during his incarceration is to be a whizz at chess and his bravado at thecasino table as a cool gambler certainly puts the shakes on Macha early on in the movie, all of whichleads him to regularly quote various rules by which he lives his life, such as “One thing I’ve learnedin the last seven years: in every game and con there’s always an opponent, and there’s always a victim.The trick is to know when you’re the latter, so you can become the former.” and “The only way toget smarter, is by playing a smarter opponent.”.

However, while Revolver is a solid 7/10 for the first hour, after that as the repeated rulesof the con start to blend in to one another and the mix of visuals and content start to go off like atrain derailing, it all gets far too clever for itself and that train just jumps right off the trackand goes completely out of control. You begin to wonder what on earth you’re watching.

There are double dealings and double crossings, drug deals the bridge relationships between Macha,unseen big-time drug head honcho Sam Gold and his assistant Lily Walker (Francesca Annis ina dodgy Magenta Devine wig-and-glasses combo) and Triad crime boss Lord John (Tom Wu) and Jake,along with Zach and Avi, gets involved in all of it, not always with a particularly successful outcomewith regards to how this holds together as a movie.

Revolver is a bit disjointed at times and occasionally mixes in current events with eventsthat have happened in the recent past as they’re discussed in the present, but it does hang togetherfor the most part as something that’s worth a look if you’re prepared to give it a chance. However,there’s some utter nonsense in the last half-hour where Jake is wrestling with his inner demons ina lift that is not at all interesting and just drags on, robbing you of your interest in the filmand when we finally arrive at the film’s conclusion, you’re just left thinking, “Pardon?”

I was prepared to give this a chance, hoping the critics were wrong and that it was just their typicalbacklashing after his success with Lock Stock… and Snatch, but no, this one’s really notright. You’re hoping it gets back on track, as earlier on we were treated to some smart Gorillaz-styleanime pieces and two segments where the camera respectively follows the movements of Lord John and Jake’sfaces, keeping them still in the picture while the picture moves around them, but such things are veryfew and far between and, while it starts to feel like it will come back together at a point in thefinal act where Mark Strong, as hitman Sorter, really gets to shine, but then things fall backdown again.

There are a lot of flashy visual moments that impress at first, but once the movie is over, you realiseso much of it had very little to do with the plot and, thus, feels pointless.

Finally, one thing that will really confuse the TV broadcasters when this film comes to be shown, sincethey just LOVE to truncate and speed-up the closing credits of a film, there ARE none to be seen, justa copyright logo and a few minutes of black screen while an enigmatic piece of classical music is played,namely Erik Satie’s “Gnossienne No.1”.

The film is presented in anamorphic 2.35:1 widescreen with no problems whatsoever, nicely contrastingthe rich tones of a casino with, say, the stark tones of a tanning salon room.

Soundwise, I went for the DTS 5.1 audio track, which packs a punch when required, but most of the timeit’s for sharp gunshot sounds.

The extras are as follows, and there seems to be more substance than there actually is:

The Concept: An Interview with Guy Ritchie and James Herbert (16:14):Presented in 16:9 anamorphic widescreen, with film clips in the original 2.35:1 ratio like allthe other supplementals, the director and one of the film editors discuss how the film came to thebig screen in its evolution. They say that it took them 2 days of editing and 2-3 weeks of preparationto make the aforementioned crappy lift scene with Jake and his inner demons. That was time wasted.

Guy Ritchie also said that when he watched the final cut he couldn’t find a problem with it and that he wasfar happier with this film than any other he’s done. Is he mental?

The Making of Revolver (24:28):Split into several, well-chaptered, parts, this section mixes on-set footage with soundbites from allkey cast and crew members as well as film clips. Guy Ritchie tries to explain how it was meant to turn outfor those who watch it, but after watching it you can tell that’s bunkum.

Deleted scenes (24:10):6 scenes here, some in 2.35:1 and some in 16:9 anamporphic, and some introduced by Guy Ritchie,including an alternate opening scene and an alternate assassination scene, although I’m glad theykept the originals of both.

Music trailer (3:41):Presented in anamorphic 2.35:1 widescreen, this neatly blends in clips from the film in a clever way toa remix of Ennio Morricone’s “Muccio Selvaggio”. Obviously, don’t watch this before the film asit gives too much away.

Overall, a disappointing film compared to his big first two successes, with extras that are very muchwatch-once-only.

There are subtitles in English only, with 17 chapters which isn’t enough for an almost-2hr film as I thinka minimum and some of these are too long. Finally, this DVD contains a nice revolving menu, but it’s notpractical as when you make a selection to move along to another option you’re basically playing thetitle that makes that bit of the menu ‘spin’ round, thus the music stops and starts up again andthere’s no natural flow of progression.