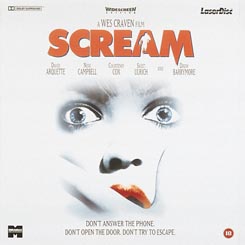 Screamhas been critically-acclaimed as the definitive horrorthriller of the 1990’s from master of the genre Wes Craven.

The residents of a picturesque small town are being victimised by a sly psychowith a twisted love for scary movies, who originally struck exactly a year agowhen he killed Sydney’s mother. As this masked predator continues to mimichorror films with real-life acts of terror, it becomes clear that solving thismystery is going to be murder!

Wes Craven’s clever horror tale has quite a cast involved, beginning withDrew Barrymore who is first on the list for termination so doesn’t geta great deal of screen time, but the babe quotient doesn’t end there as thefilm’s main heroine is Neve Campbell from TV’s Party of Five,closely followed by Friends star Courteney Cox as a hot-shotTV reporter on the verge of breaking the biggest story in her career.

David Arquette takes the male adult lead as the local deputy, whilethe teenagers caught up in the murders are Skeet Ulrich as Sydney’sboyfriend, plus Jamie Kennedy, Kevin Patrick Walls and LievSchreiber.

Finally, there are notable, uncredited cameos by Linda Blair, mostnotable as The Exorcist‘s Regan, Wes Craven himself as thejanitor, plus Henry Winkler as school principal Himbry. Heyyyyy!

The picture quality is superb, bringing out flesh-tones and gore in equalmeasures. The disc is made all the better for being presented in widescreen2.35:1 as shown in the cinema.

It’s interesting to note that the widescreen process has some strange effectsused at times, sometimes to make a face appear slightly stretched across thescreen (see Drew Barrymore in first scene; and a close-up of Courtney Cox lateron), while other scenes leave the middle of the picture normal, but squeeze thesides of the picture, resulting in more picture info being enclosed within the2.35:1 ratio (see scene of Henry Winkler making his last entrance into hisclassroom; and all the kids sat in the lounge watching TV at the party).

While the film was shown in cinemas in Dolby Digital 5.1, the Dolby Surroundsoundmix on this disc is also very effective. As you’d expect in a horror film,there are shocks at every turn, jumping out at you crisp and clear.

The version of the film on this disc is the ‘R’-rated version as shown in theUK and USA cinemas, although a director’s cut has been released on NTSCLaserdisc which includes a commentary track by Wes Craven, plus twenty secondsof restored footage, namely :