Shaun of the DeadA romantic comedy. With zombies.
Distributed by
Universal Pictures UKBlu-ray:

Shaun of the Dead is a comedy/horror that had a clever marketing campaign:It’s a “RomZomCom” – a Romantic Comedy… with Zombies.

Eagle-eyed TV viewers of decent comedy programmes (so those who think Friday nights should be centred aroundMy Family, Carrie & Barry, Eyes Down and All About Me can go and shoot themselves in the head),will have noticed the split-second they heard of this movie that it came from the cast and crew of many ofthose associated with the unsurpassable Channel 4 comedy,Spaced.If you loved that, you’ll love this. And it’s so rare to be presented with a film to watch that not onlyhas high expectations placed upon it, but one that also fills them all.

The premise is a simple one. Shaun (Simon Pegg) is a sales advisor at a local electrical store, hehates his job, and when given the chance to stand in for his boss, the staff show no respect for him whatsoever.His home life is a mess because his flatmate, Pete (Peter Serafinowicz – BBC2’s Look Around You), is still annoyed at the fact thathis drug-dealing best friend and all-round slob, Ed (Nick Frost), has long-since outstayed his welcome,and after one cock-up too many, Shaun now finds himself single after being dumped by his girlfriend of three yearslast week, Liz (Kate Ashfield).

What to do next? Go down the pub, that’s what, and drown his sorrows with Ed, the one person in this sorryworld who can still make him laugh. He’ll need that the next morning as the TV is telling of many atrocitiesgoing on around the country as zombies have taken over, the reason for which is never explained but thenthat’s not the point, and the only learn of the reality once they’ve come across two of them in their garden,starting with a girl they just assume to be heavily drunk, and when she survives something that would normallybe fatal to human, they realise something’s rotten in the state of New Cross, London…

The plan is therefore set, and Shaun devises a way that’ll enable him and Ed to rescue his Mum, Barbara(Penelope Wilton), deal with his step-father Philip (Bill Nighy), since they’ve got theimpression that he’s gone over to the other side, swing by Liz’s flat and they can all keep safe until thecoast is clear. Of course, it’s never going to be that easy, even when they finally agree on holing up atthe Winchester pub.

As I said before, fans of Spaced are going to love this, and fans of any decent comedy shoulddefinitely take a look at this. There’s nothing too gory on view, but that said it’s not really suitablefor anyone under the 15-certificate age limit it’s being tagged with. Pegg and Frost largely reprisetheir same flatmate roles – although they did used to share a flat together many moons ago so it could beargued they’re just playing themselves, and there’s a neat cameo or two from their co-star from that series,Jessica Stevenson. The Office‘s Lucy Davis plays Liz’s best friend, ditzy Dianne,and Dylan Moran is her overly-fussy boyfriend, David, who really needs a punch in the face forhis behaviour as the chaos ensues. 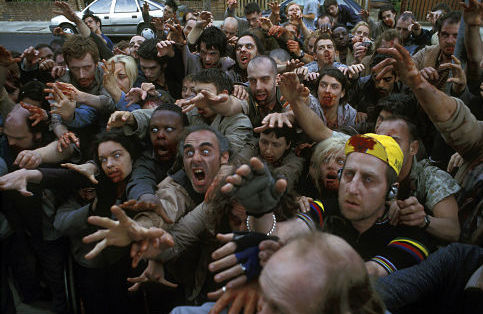 The main in the yellow cap will look familiar to Spaced fans.

There are so many clever little touches, such as when Philip finally does turn into a zombie, and asShaun tells his Mum, “There is nothing of the man you love, left in that car!”, inthe background we can see him clambering into the front of the car to switch off the radio’sloud music he was only just complaining about. And when they start throwing LPs at the garden-basedzombies, I too couldn’t believe that Ed blindly chucked an original pressing of New Order‘sBlue Monday! Good job I didn’t see this in the cinema as I howled when it happened.

There’s also a fantastic spoof of theReservoir Dogs stand-off, and brilliantjokes that stand-out, such as when Shaun and Ed escape their home to go on their rescue missionusing Pete’s car, the seriousness of the situation takes a backseat several times such as whenpassenger Shaun asks, “Would you like me to drive?”, but Ed replies, “Oh, I’ve adjusted the seat now!”,and there are a good handful of ‘repeated’ jokes, where the same line crops up more than once in amovie, often having different meanings.

There are cameos aplenty from many TV comedy shows, such as Martin Freeman, Reece Shearsmith, TamsinGreig, Matt Lucas, an uncredited Julia Davis as the voice of a newsreporter, and, well, if you’rea fan of Spaced you’ll watch and enjoy this anyway so I’m preaching to the converted. It’s just a shamethat none of the people who appear on TV shows as themselves get killed, particuarly monkey-boy”how-did-THAT-ever-become-a-model” embarrassment to Manchester, and probably Channel 4’s only non-gayTV presenter, Vernon Kay.

That aside: Shaun of the Dead – it’s Perfick!

Director Edgar Wright, who I had the chance to interview following the DVD release of Spaced– which can be read from the link below, makes excellent use of the full 2.35:1 anamorphic frame, givingeverything in certain scenes a slightly vertically-stretched look to heighten the tension in the situationand fit more into the frame. The picture is crisp and clear. Everything is nicely detailed and I alsolove the whizz-pan shots which are frequently used, especially early on in the film.For the record, I’m watching on a Panasonic 37″ Plasma screen via a Samsung BD-P1500 Blu-ray player.

The Dolby Digital 5.1 soundtrack excels in providing tension as well as musical relief when required,along with adding to the situation such as perfect placement of Queen‘s “Don’t Stop Me Now”and “You’re My Best Friend”. Directional sound FX also come into their own at the right moment.There’s just nothing to complain about whatsoever! (apart from Vernon Kay not being killed…Voice in Dom’s head: “It’s only a movie!”… Me: “Movie?”) 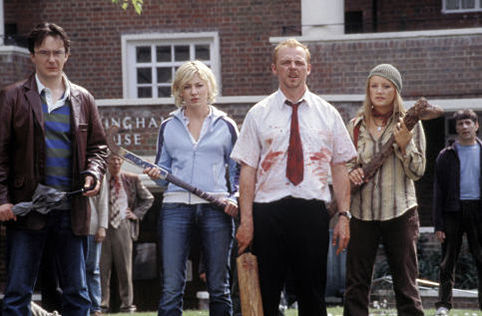 The extras on this disc, which contain spoilers, are presented in various different aspect ratios,and most being subtitled, are as follows: