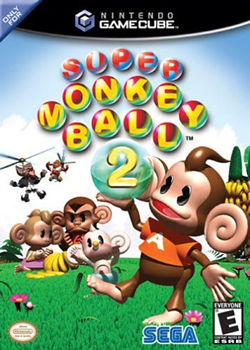 Super Monkey Ball 2is another fun game for the Gamecube, but like most titles destined for theNintendo, it’s not one that’ll be too complex plot-wise. It is one thatgets quite difficult along the way though.

This sequel is the first in the series I have played and is also the firstto have a story mode. The evil Dr Bad-Boon’s going to affect your littlemonkey world by causing all sorts of havoc and can only be conquered by rovingthrough 150 separate levels, always attempting to reach the goal by tiltingthe world on which your monkey (choose from AiAi, MeeMee, Baby or GonGon) movesabout in his ball, collecting bananas along the way. Remember that what youmove is the world and not the ball. Sounds difficult but this is much easierto get to grips with than it sounds.

Between the worlds there are cut-scenes (which can’t be bypassed in case you’veseen them before) about Dr. Bad-Boon and his dastardly plans, and the wholething is as Japanese and bizarre as you can get. 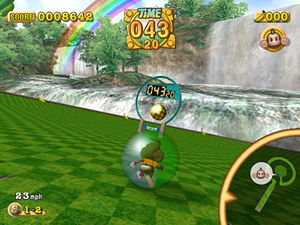 Graphically it’s absolutely gorgeous and runs like the wind. Colour is lush,from green field-like areas to the fiery pits of hell and under the ocean,just to name the first three worlds to conquer with 10 levels games per world.There are, however, some jaggies on straight lines which could have beenavoided.

All of this makes it an eye-catching experience, with all manner of curvy paths,two clever tracks being the Gravity Slider where you take a long deeppath to the exit at an ever-increasing speed and also Inchworms, thetrack moving about in an erratic style.

The sound grabs the attention, despite the Gamecube having a lack of DolbyDigital 5.1 capability, and it’s a title that is relatively easy to get intobut one that’s difficult to master. You’ll be falling off the edge of the worldplenty of times before completing certain levels. 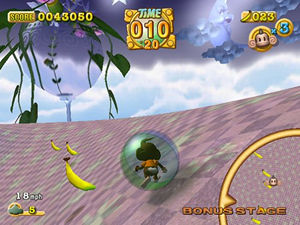 One thing I haven’t been able to try is the online play, for which you needthe network adaptor.

That said, there’s scores of party games to attempt, withsix to begin with – Monkey Race 2 (circuit racing), Monkey Fight 2 (punch eachother with big boxing gloves and knock them out of the ring), Monkey Target 2(Open your ball to glide and land on the target), Monkey Billiards 2 (pool),Monkey Bowling 2 (10 pin bowling) and Monkey Golf 2.During the billiards game, when it’s console’s turn it was quite amusing tosee the big colourful letters stating: “COM SHOT”.Also, note that one of the unlockables is the Alan Partridge-esque”Monkey Tennis”!

Back to the main game, though, and I have to say that this is something youshould rent first before you buy. I found it starts off as fun but does becomequite irritating quite quickly as you keep falling off the platforms. If youstill want to play more after a couple of hours then make it a purchase.