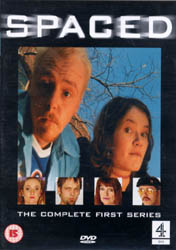 If you can understand Spaced,it probably isn’t for you, because the off-the-wall story of the charactersin this series doesn’t make any sense at all, but is still very enjoyable.

Cartoonist-cum-fantasy-artist Tim (Faith in the Future‘s Simon Pegg),works in the Fantasy Bazarr comic book shop with Bilbo (Bill Bailey)and has been thrown out ofthe house he shared with his girlfriend Sarah and wannabe journalist Daisy(The Royle Family‘sJessica Stevenson) has voluntarily left the house she shared with somedope-f(r)iends. Circumstances bring them together in a cafe, which leads tothem posing as a professional couple in order to get them a flat together,despite the landlady being the drunk Marsha Klein (Julia Deakin)and the building containing the weird Brian (Mark Heap, who appeared withSimon Pegg in the sketch show Big Train) who maintainshe is also an artist, but one dealing in works that reflect pain andaggression.

Throw in a number of other characters including regular best-friends forDaisy and Tim respectively, Twist (Liverpool 1‘s Katy Carmichael) and “weapons expert”Mike (Nick Frost), plus movie references aplenty including2001: A Space Odyssey, Close Encounters of the Third Kind, The Blair WitchProject and The Matrix and it doesn’t all quite gel together, butthen it’s not really meant to.

I didn’t quite get into this programme first time round, but learned of theDVD around the time when the series was repeated (Feb 2001) and gave it asecond chance with the sixth, clubbing, episode. Then things began to click.

It’s not a laugh-out-loud funny sitcom, but clearly draws you in with itsstyle including the use of cut-scenes spliced in all over the place, such asin the final episode when an argument between Daisy and Tim is intersplicedwith footage of twoTekkencharacters slugging it out.

There’s no problems with the encoding of the picture on this DVD, althoughit does have a slightly washed-out and blurry look to it throughout. However,that is down to the way it was filmed. It’s also presented in the originalanamorphic widescreen 16:9 ratio, as shown on Channel 4 and the averagebitrate is a 5.31Mbs, occasionally peaking over 8Mb/s.

Spaced doesn’t have a theme tune of its own, but it’s populated bysnippets of different songs – almost all of which are named in the subtitles -and other programmes’ theme tunes, including Murder She Wrote and aremix of The A-Team, plus various audio swipes that accompany visualcues. Call me a purist, but if someone had remixed the entire soundtrack intoDolby Digital 5.1 it would have been quite a perfect treat.

The extras, all in anamorphic 16:9 widescreen, feature Cast and Crew Biographies for not only the majorcast members, the director and producers, but also the characters themselveswhich is quite a novel twist. The Trailers section consists of twoteasers, the trailers used to specifically advertise episodes 3, 4, 5 and 6and a near-two-minute trailer for Series 2, which you’ll be seeing regularlyof Channel 4 if you’re reading this review in the week of February 19th-23rd2001.

There are nine minutes of Out-takes and thirteen Deleted Scenes,each with an optional audio commentary track explaining why they were left outalthough the booklet comments on this too. Finally, likeThe League of Gentlementhere’s an Audio Commentary track from Simon Pegg, JessicaStevenson and Edgar Wright which runs for the full length of theseries. I hope more programmes do this in future.

The disc contains five chapters per episode, subtitles in English for thehard of hearing which capture just about all of the dialogue and the menuscontain music plus subtle animation which changes colour. On my Creative Dxr2DVD-ROM player, the menus didn’t appear most of the time (I also had a similarproblem withDogma),but it worked fine on a Playstation 2.