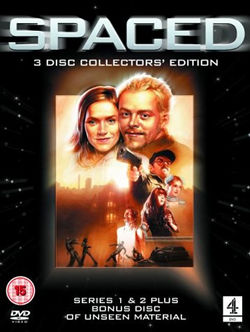 Two series of Spacedbrought about a phenomenon that led most recently to the fantastic movie, Shaun of the Dead.

This new boxset contains three discs, the first two I’m presuming are the same as the originalreleases (the links for which are at the bottom of this review), although only the third discof bonus unseen material was available for review, hence why I’ve kept this in a separatesection.

One wonders why the studio didn’t go to town on a fantastic cult release like this because thestars of Simon Pegg, Jessica Stevenson and director Edgar Wright are all in theascendent, and upon enquiring about running a competition to coincide with the review, it seemedthe distributor in question will only go for reviews OR competitions. The latter, therefore, goesto sites that don’t run competitions, such as fan-sites. Pardon? Fan-sites are full of the mostintricate of reviews, dissecting episodes piece-by-piece and containing episode guides, a whole listof film & TV references and just about any other bit of trivia that can be drawn out of a release.

VCI – there are some websites, like this one, which just want to promote a work of genius likethis to the hilt and you’re really not making it easy for us!

The main extra on this supplementary disc is an 81-minute behind-the-scenes film,Skip to the End, which looks at everything about the show, divided into 12 chapters,looking at the writing, characters, filming both series, references and homages,as well as revisiting locations – actually and mentally.

As we join the three main heroes of the pieces, there’s some pretend-crying as Simon Pegg,Jessica Stevenson and Edgar Wright all join up for a look back at the series, walking fromlocation to location, interspersed with direct, off-camera interview snippets that contain awealth of information. We also see many work-in-progress and on-location shots along the wayand there’s a a nice surprise at the end…

Simon and Jessica met at the audition for the sketch-show, Six Pairs of Pants – whichalso featured Katy Carmichael, who went on to appear in Spaced, and underrated ComedyStore Players regular, Neil Mullarkey – as well as Asylum on the Paramount Channel.They both wanted to make Spaced because no sitcoms on TV at the time spoke to the20-something generation. Edgar Wright had previously worked with Little Britain‘sDavid Walliams and Matt Lucas on Paramount’s Mash and Peas. (Please can Paramountrepeat these series?)

Of the others featured in this programme, presented in anamorphic 16:9, Nick Frost wasbrought in by Pegg claiming he was an actor, yet he was just a waiter and both Paramount andLWT took a chance which paid off; Peter Serafinowicz guest-starred as Duane in thepaint-balling episode. It’s the first time they’d met him but struck up a firm friendship after thatand he also went on to work with them in Shaun of the Dead, as well as Edgar returning thefavour in Peter’s superb BBC2 piss-take of the ‘Programmes for Schools’ from the ’70s and ’80s,Look Around You.

Others here include David Walliams who appeared as Vulva, not quite a mime artist butsomething more arty and post-modern, with Paul Kaye alongside who had a vacuum cleanertied about his person. Bill Bailey played the manager of the comic book store,Reece Shearsmith as the main ‘enemy’ in the Robot Wars episode,Nighty Night‘s Kevin Eldon as ‘Agent Two’ in the Matrix-style episode,as well as Shearsmith’s League of Gentlemen cohort, Mark Gatiss as ‘Agent Smith’.

The cast and crew discuss the club scene from one episode, which also hit the mood right withits target audience, as everyone’s had mad nights out where you have one, twoor no more than a few classic nights in a club, depending on who you’re out with, but if you tryand recreate the same thing another night it never works out so it’s best to just love the night forwhat it is.

There’s an excellent self-referencing piss-take fromAin’t It Cool News.com‘sHarry Knowles, calling geeks with memorabilia. And, talking of geeks, there’s even a couple ofSpaced fans featured who just happen to be taking pictures of the house as the main threego back to the house where Tim and Daisy lived.

I’m in agreement with many of those interviewed that I’d love to see a third series produced,but then if there’s not the time to write it and they don’t feel it could be as exact as theywant it, then it’s best to quit while you’re ahead on that score, and use the same cast andcrew on future gems like Shaun of the Dead.

The other two extras to this disc include a 3-minute ‘Spaced Jam’ by Osymyso, whichremixes dialogue and clips from the programme to music, much like the effect given in the menu,audio-wise; and an updated cast and crew biographies section, detailing info for allthe cast members listed under the packshot plus its director and producer, Nira Park.

I won’t give this single disc a usual rating out of five stars, but take note that it does make aworthy addition to the two series, although if you own both of those then you’re really payingfull whack for an 80-minute ‘making of’, which could quite easily be broadcast on Channel 4 asa standalone programme if they were allowed to do so.