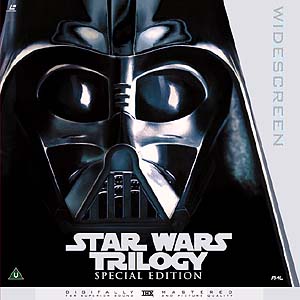 A long time ago in a galaxy far, far away… – well 1977 to be exact,the fourth a nine-strong series of books collectively known as Star Warshit the big screen and became one of the first cinema films to make use ofDolby Stereo, which translates in the home as Dolby Surround.

The idea behind these special editions is to bring the whole trilogy as closeas possible to the original vision of its creator, George Lucas.Improvements include a new scene in the first film in which Han Solo engagesin conversation with Jabba The Hutt. Usually not known for his conversationalskills, this Jabba was a circa-1997 CGI creation interacting with a circa-1977Harrison Ford.

One other slight difference I noticed was that whereas the voice of DarthVader, James Earl Jones, was never credited until the third film butthis time round he is credited in all three.

More importantly though, this is the first PAL Laserdisc title to be giventhe THX approval, something of a regular feature for NTSC discs, but for whichcan be seen as something of a milestone for PAL discs. However, whereas titlessuch as Braveheart and Independence Day were not stated as THXon the disc cover, the master used for the VHS tapes had been so approved andthe cassette covers carry the logo. Since the laserdiscs were made from adigital clone of the THX-approved master these may as well have beenTHX-approved as well.

The trilogy of films here cover episodes four, five and six in the nine-bookseries. Work has already begun on episodes one, two and three, which will starTrainspotting‘s Ewan MacGregor and the first episode will reachcinemas in 1999. The first film will also be directed by George Lucas – hisfirst since Star Wars as his confidence in directing was knocked after severecriticism. 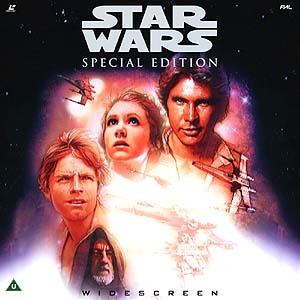 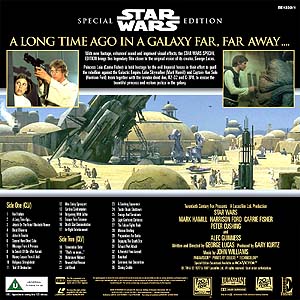 In Star Wars Episode IV: A New Hope, we are introduced to LukeSkywalker, an only child living with his aunt and uncle, who gets the unenviabletask of having to buy some new service droids, C3PO and R2-D2, instead ofplaying with his friends. One of the droids carries a message from a mysteriousprincess named Leia who is in need of help, but he doesn’t know for whatexactly.

His inquisitiveness to find out more takes him in the direction of master ofthe Jedi ways, Ben Obi-Wan Kenobi, who teaches him the powers of the force.He also meets up with bounty hunter Han Solo and sidekick Chewbacca;together they set off to find Princess Leia who, it transpires, has beentaken hostage by the evil Imperial forces in their effort to quell the rebellionagainst the Galactic Empire. Will they be able to destroy the Death Star andrid the universe of the evil Darth Vader? …someone may have to make theultimate sacrifice if they are to succeed. 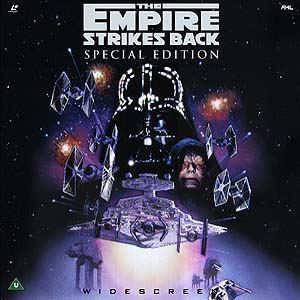 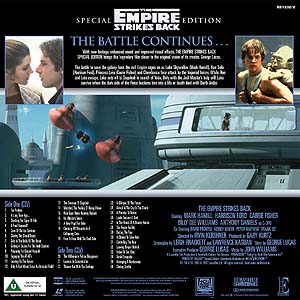 The adventure continues in Star Wars Episode V: The Empire Strikes Back,travelling between the Ice Planet of Hoth and Dagobah, the home of Yoda whowill take Luke’s training one step further.

The film begins with Luke searching for signs of life upon Hoth and findingmore than he bargained for when he comes across the cave of the ice creature.A fierce battle ensues later against the AT-ATs, a scene which was laterrealised in the PC and Nintendo 64 computer game, “Shadows Of The Empire”.

While Han Solo, Princess Leia and Chewbacca go forth to attack theImperial forces, Luke goes for training in the ways of a Jedi with themaster of them all, Yoda, who teaches him all he needs to know.

Finally, all is not well for our two main characters as Han Solo finds himselfup against an immovable barrier and, in a lightsaber battle, Darth Vaderreveals a deep secret to Luke Skywalker, Darth proving he’s a card-sharp asLuke literally loses his hand. 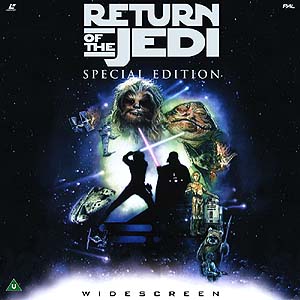 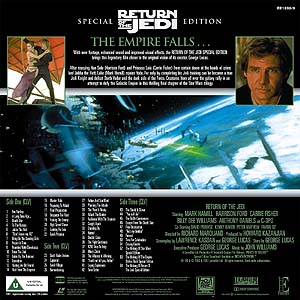 The trilogy concludes in Star Wars Episode VI: Return Of The Jedi,with Luke returning to Yoda to complete his training after having previouslybroken off to save the lives of Princess Leia and Han Solo by rescuing themboth from Jabba The Hutt. It is only by completing his training that he canbecome a true Jedi Knight, and thus defeat Darth Vader and the dark side of theForce.

Creatures from all round the galaxy rally round to help our heroes, notablythe Ewoks of the Forest of Endor, the scene for a thrilling high-speedchase early on in the film, as the Galactic Empire have constructed a newDeath Star.

Now a fully-fleged Jedi Knight, Luke leads the attempt to finally get rid ofthe Death Star once and for all and in the meantime discovers certain hometruths involving Darth Vader and Princess Leia.

If there’s one thing that’s becoming particularly obvious following theStar Wars Trilogy, it’s that the only newcomer to films to succeedbig-time in the movie business was Harrison Ford. Since this series,each of his action heroes have all had the same cocky personality as Han Solowho showed it off perfectly when trying to communicate with a guard over anintercom. Realising that talking was a waste of time he shot the control panelup, commenting in a wry fashion, “boring conversation anyway (!)”.

Be it playing professor-cum-archeologist Indiana Jones, or taking overfrom Alec Baldwin as CIA action-man, Jack Ryan in Patriot Gamesand Clear And Present Danger, the latter in which he went against thewishes of the President of the United States, it was quite ironic that he thenwent on to play the said President in 1997’s Air Force One.

Established actors such as Peter Cushing and Alec Guiness havealways found their place in Hollywood, but the future hasn’t been as brightfor Mark Hamill who starred in a number of flops such as Slipstream,The Flash 2, Mutronics – The Movie, and the FMV (Full Motion Video) sequencesof the computer games, Wing Commander III and Wing Commander IV.

The same can be said for Carrie Fisher who has had bit-parts in WhenHarry Met Sally, Soapdish, Hannah And Her Sisters and The BluesBrothers, as well as writing the autobiographical script for the MerylStreep/Shirley Maclaine-starrer, Postcards From The Edge.

Finally, it has to be noted that Michael Sheard makes an appearanceas Admiral Ozzel in The Empire Strikes Back. Not sure who he is? He’sonly the most famous deputy headmaster of all time, playing Mr. Bronson inBBC1’s Grange Hill, as well as playing Adolf Hitler in Indiana JonesAnd The Last Crusade – so no change in character required there…

As stated earlier this is the first time the Star Wars Trilogy have beenreleased on PAL Laserdisc in widescreen, although fullscreen analogue discswere available in the early 80’s which are best forgotten about.

The picture quality is first-rate throughout the trilogy bringing out thedetail perfectly in the special effects old and new. New incidental charactersappear in all shapes and sizes from small creatures hopping about on Tatooineto a huge mammoth-style character which waddles across the screen just as BenKenobi is about to prove to the Stormtroopers that they don’t need to seeLuke’s identification. There are also more rebel forces lining up to take a popat the Death Star at the end of the first film, not to mention a morespectacular destruction scene.

Similarly, the sound quality is also up to the usual high THX standardswith directional effects aplenty in the battle scenes, as well as the perfectambience settings for the occasional quiet scene. The only thing missing inthis respect is that due to their increased quality in picture, PAL discscan only carry the Dolby Surround soundtrack, and don’t have room for theDolby Digital soundtrack which was one of the highlights of the specialedition releases. If you don’t have a Dolby Digital setup, then you’d be welladvised to get Encore’s box-set for better picture quality than the NTSCrelease.

Another plus point is that the films are very well chaptered indeed. Thethree films attract 35, 36 and 51 chapters respectively, as well as oneeach for the ‘making of’s for each film. I did notice however that in thecase of Empire Strikes Back, the sleeve shows the chapters split as19 on side one, and 17 on side two, when there is actually 18 apiece.

It’s also interesting to note that each film is on a separate disc, somethingthe NTSC Trilogy cannot benefit from, as well as the fact that the CAV sideof the box-set contains the bike chase from Return Of The Jedi.

There are no trailers included in the set, but this is down to Lucasfilm whodid not licence these for use in any video or Laserdisc release in PAL format.The NTSC box-set does however carry the trailers for each film.

Overall, if you’re a Star Wars fan and a Laserdisc owner, you’ll have no needconvincing that this will be your next purchase. Even if sci-fi isn’t alwaysyour cup of tea, this box-set is the perfect material to demo your surroundsystem to your friends. Now let’s blow this thing and go home…