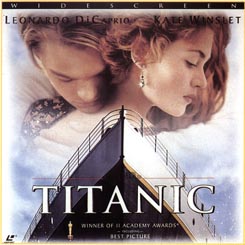 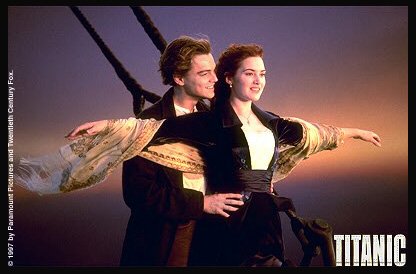 Titanicis James Cameron‘s epic account of the night that theR.M.S. Titanic went too fast on its maiden voyage and hit an iceberg, rupturingthe underside of the ship’s head and letting enough water in to make it sink.It’s one of those films that doesn’t really need its plot explaining as therecan’t be many people on the planet who don’t know that the ship didn’t quitemake it to its destination, but rather took a diversion to the ocean bed.

In amongst the carnage, comes a tale of forbidden love and courage in the faceof disaster. Leonardo Di Caprio and Kate Winslet, who was nominated for anBest Actress Oscar, as Jack and Rose, the young lovers separated by socialclass yet destined to find each other on the “unsinkable” ship.

The film won eleven Oscars including Best Picture and Best Director and it’seasy to see why due to the grand scale of what’s on show. When the ship startsto go down, it’s a special effects extravaganza from the huge reconstructionof the vessel – a 90%-scaled model – right down to the mere breath of coldair exhaled by cold and frightened passengers. The success of the film hasresulted in worldwide box office takings of over $1 billion and has spawnedtwo soundtrack albums featuring James Horner‘s unsurpassable score andmusic from the film including Celine Dion and “An Irish Party In ThirdClass”.

It could have been a different story though. Originally budgeted at around$120 million, delays and mounting problems forced production costs to spiralin rocket-like fashion to way over $200 million. Soon after, Cameron was beingcriticised beyond all comprehension and Hollywood critics reckoned the filmwould sink at the box office like its namesake ship.

Thankfully, Cameron was proved right in the end. Cinemagoers and the rest ofthe nation piled into the cinemas for over six months, a rare sight indeed.In fact the only other film from recent times that has stayed in cinemas foras long was the British hit, The Full Monty, but it’s quite a differentthing though to get the average Joe to stampede to the cinema for a film overthree hours in length – as opposed to a 90-minute comedy – and as such Titanichas become the biggest grossing film of all time to date.

A first-class film deserves a first-class cast and it gets it with the twoleads performed by rising star, sometimes dubbed as the new RiverPhoenix, Leonardo DiCaprio and Kate Winslet, who is usuallyfound in low-budget films, but has been cast into the limelight with this film.It hasn’t gone to her head though and even at her recent wedding to JamesThreapleton, assistant film director on the set of her forthcoming filmHideous Kinky, there were no major amounts of security and the presswere allowed to take photos, unlike a recent Spice Girl wedding.

While Jack is, literally, the small fish in a big pool of rich people, therest of the cast includes Billy Zane as Rose’s prospective butdestructive husband, Frances Fisher as Rose’s mother, BernardHill as the ship’s captain, Jonathan Hyde as the ship’s creator,Bill Paxton as the leader of a crew interviewing Rose in the presentday trying to find out what exactly happened and Gloria Stuart as Rosenow, which gave her the nomination for the Best Supporting Actress Oscar.

There are a few pieces of artistic licence though such as the scene of thecaptain going down with the ship, although apparently the real one didn’t,as well as occasional one liners: As one man walks climbs a staircase towardsthe rear of the ship he recites Psalm 22. When he gets to “Yea, as I walkthrough the valley of the shadow of death”, Jack shouts, “Wanna walk a littlefaster to that valley ?” 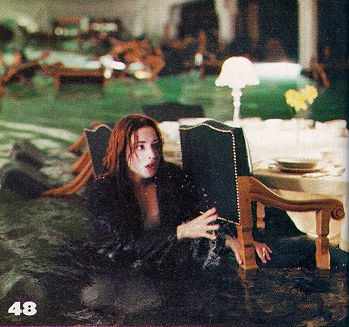 A stunning film deserves a stunning transfer and that’s exactly what you gethere. In the cinema the film was breathtaking and at home, even on a 21″television, the experience, for me, has as great an impact. The widescreenframing is preserved here and it’s the only way it can be watched. Althoughthe film was shot using the Super-35 technique, allowing non-SFX shots tosometimes be shown with more picture at the top and/or bottom, while losingsome side picture information, word has it that the fullscreen version is asbad as a standard pan-and-scan transfer.

Note that as the widescreen version has a ratio of 2.30:1 and that widescreentelevisions have a ratio of 16:9 (ie. 1.78:1 approx.), so you will still getblack bars on your widescreen television. This may seem obvious to maylaserdisc owners out there, but while a few people have asked me why thishappens – because one medium is wider than the other, so the old adage that youcan’t fit a square peg in a round hole applies – the problem manifested itselfon BBC TV’s Watchdog after an old man had more money than sense andspent £1700 on such a TV without bothering to learn the difference inratios and complained when his Titanic video didn’t fill the screen.Watchdog went on to explain, badly, that there are six different film ratios -when there are many more – and then showed the film on a widescreen TV butusing the 16:9-enhanced mode (on a non-enhanced video) thus squashing thepicture further and making everyone look fatter and accentuating the black barsthus filling the screen with twice as much blackness.

The sound quality is superb as well. Not only the aforementioned score andmusic, but the speakers will cry out as the ship rips apart. This PAL laserdiscis only the second to carry the THX logo for approved picture and sound quality.Plenty more discs will have been taken from a digital clone of a THX-approvedmaster such as Braveheart, Independence Day and Speed, but itisn’t cheap to include the logo on the cover.

There are 30 chapters throughout the film which isn’t enough for a 189-minutefilm and there is no trailer, but there wasn’t one on the NTSC Laserdisceither, the only thing you’re missing out on being the Dolby Digital soundtrack.This disc also comes in a gorgeous gatefold sleeve and the film is split acrossfour sides in CLV. 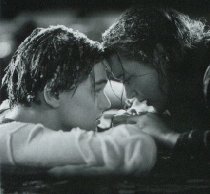 If I had any complaints it would be the low number of chapters and that factthat the film suffers the U.S. problem of “PG-13”-itis, namely that the onlything done to attain that rating was to include one unnecessary “f-word” in thescript.

Overall, this is my favourite film of the year and one of the best reasons tobuy a laserdisc player since Encore’s release of “The Big Blue: VersionLongue” earlier this year. Rumours are abound, though, that James Cameronwill eventually release a director’s cut containing 30 minutes extra footage,a commentary track and a making-of documentary. Perhaps that will be the runningorder on the DVD when Fox get around to the market outside Japan. Until then,the only Titanic-esque DVD content appears on Carlton’s A Night ToRemember.

For now though, this disc only has competition from the NTSC Laserdisc whichis more expensive at $50 and a widescreen video box-set costing even moreat £79.99 and contains the film, the script and the making-of documentary.