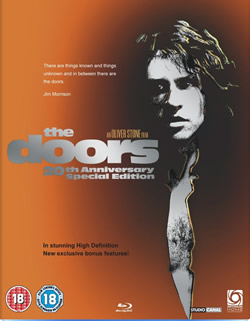 Is everybody IN? Is EVERYBODY in? Because my review of The Doors is about to begin!

Nearly 20 years after he died, Oliver Stone sought to make a film about the rapid rise and heavy fall of Jim Morrison, the formation of The Doors, his relationship with Pamela Courson (Meg Ryan) and everything leading up to the man’s death. Stone created a piece of work that is a triumph of both style and substance and brought out the performance of his life from its lead, Val Kilmer.

We see the moment when they were asked not to sing ‘higher’ on The Ed Sullivan Show and replace the word with ‘better’ – since ‘higher’ was perceived as a reference to drugs – and they chose to defy this. It wasn’t all factually accurate, though. After having his student film criticised by most of the class at UCLA, Jim Morrison didn’t quit, and they also didn’t smoke peyote in the desert later on.

One of the biggest tragedies, other than Morrison’s death, can be summed up in just one question – Just what happened to Val Kilmer’s career after his wonderful performance in this film? I know it’s an overused phrase, but he “owns” the stage here, so to speak. He could’ve made the big-time and was on his way up after appearing in Top Gun, but duff choices included The Real McCoy, Batman Forever and The Saint and despite a good turn in Michael Mann’s Heat in 1995, things just stalled from there for him.

The rest of the cast is wide and varied, but provide adequate support including Meg Ryan, plus Frank Whaley as guitarist Robby Krieger, Kevin Dillon as drummer John Densmore and, especially, Kyle MacLachlan as keyboardist Kyle MacLachlan.

I’ve always loved this film and I remember after seeing it in the cinema while I was at University, I phoned my Dad the next day and said “I went to see The Doors last night”, and in all innocence, he replied, “Oh, were they good?” :)

Go to page 2 for the presentation and the extras.