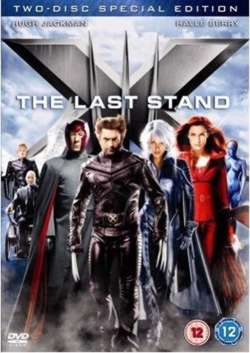 X-Men 3: The Last Stand: While the first X-Men movie did nothing for me, the sequel was a real blast and this third outing is just as good even though it might annoy purists of the comics because there really isn’t time to go into a lot of depth about all the different characters and there’s a hell of a lot onscreen throughout the brief 99-minute running time.

When you start up the DVD, the menu gives you a choice between “Join the Brotherhood” (i.e. Magneto’s lot) and “Take a Stand” (i.e. the good guys), and when the movie came out at the cinema the poster was tagged “Whose side are you on?”, comedian Will Smith (no, not that one, the English toff one) said on Radio 4’s panel show Banter, “I thought I was just going to watch a film, I didn’t realise you had to pick a side?!”

The movie starts “20 years ago” as a walking Xavier (Patrick Stewart) plus Magneto (Ian McKellen, who like Stewart also recently had a guest part in Ricky Gervais’ sitcom Extras) go to meet a teenage Jean Grey (with, I’m sure, Famke Janssen playing her own character’s mother – despite the credits claiming otherwise, but at this point we still don’t know the whereabouts of her from the end of the second film).

Four of the good guys…

The main storyline running throughout this film is that drugs company Worthington labs, based at Alcatraz Island, have made a mutant antibody which, in effect, is a cure. The question is – who out of all the X-Men, good or bad, would want to go back to being ‘normal’? Sure, you wouldn’t get stared at in public if it puts your appearance at a disadvantage but at the same time you lose everything that makes you ‘special’, for want of a better word.

As such, despite their being a big scrap, as usual, between the good guys – led by Xavier, and the bad guys – led by Magneto, the real stand-off here lies between the mutants and the humans who want to adminster the drug and get some kind of control working. Do you think they’ll really win? Nah! Do you think any of the mutants will turn in their powers? Well, I wouldn’t be so quick to answer that…

I’ll try to keep the spoilers few and far between here but there is one that will appear in the next couple of paragraphs so if you want to skip to the next section, look away now. The authorities feel that if they capture Mystique (Rebecca Romijn-Stamos then Magneto will come looking for her and they’ll grab him too. Well, this certainly seems like a plan but it doesn’t go quite the way anyone expect.

Also, Cyclops (James Marsden) has gone off on one in reaction to Jean’s death from the second film and it’s hit him hard. However – and here’s where the spoiler kicks in, the good news is that she’s not really dead, she was just resting (ahem!). In a quite improbable scene, she’s brought back to life and we learn she has a dormant aggressive side known as Phoenix which can cause serious damage.

Go to page 2 for more thoughts on the film plus all the extras.