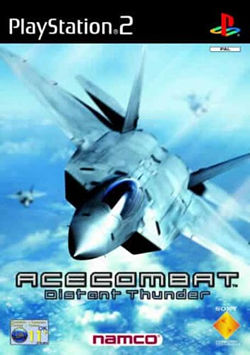 For the first game in the series to reach the PS2, Ace Combat 4: Distant Thunder places you in a series of “Top Gun”-style missions, set a couple of years into the future, as a new air combat recruit whose family has been killed and you have to seek revenge on the pilot who committed the dastardly deed.

Of course, that’s the threadbare plot for the game which connects the missions together with a series of anime-styled drawings about your town during war time.

But a game like this doesn’t really need much reason to exist. It’ll get by quite easily on its pluses because there are very few minuses that I can see.

I tried a couple of the training missions which were centred around taking off and landing, as well as firing off a few rounds at enemy planes and taking them down, but found it much more worthy to get stuck in to a mission and the first one saw me joining the ranks of the elite in the sky, getting the enemy in my sights and attempting to lock-on a target and attack each one with a missile or two, while avoiding getting clocked myself. 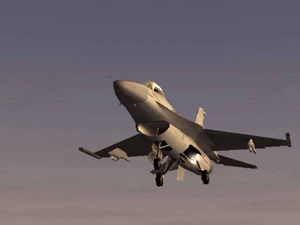 While I’m far from an aviation expert, I’ll have to take it on trust that the 21 different types of plane are modelled accurately. They certainly look beautiful and, graphically, the game plays like a dream, although it’s difficult to give them full marks because there are a few jaggies from time to time. Don’t let this put you off though. The game doesn’t appear to tax the PS2 too massively, but that’s probably because it’s making everything look so effortless. The landscape is detailed just enough to give you a sense of being there and allows you to target your missiles at ground targets quite easily, not to mention the spectacular aerial dogfights.

The sound of your plane seems realistic enough, but again it’s a case of less is more. Nothing is ever ‘in your face’ and you are allowed to blend into the game in your own time, taking stock of the voices of other planes as they talk to one another or announce that they’ve got problems, as well as the voice of ground control telling you what to do at times. Explosions and firing missiles is nicely subdued, while a rousing and pleasing score expertly accompanies the in-game action and I loved the 80s-like music over the menu screens. 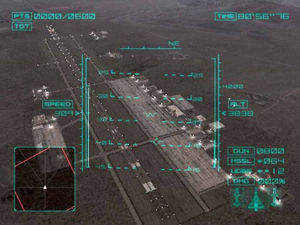 It may take a little while to get to grips with the controls in Ace Combat 4: Distant Thunder (also known as Ace Combat 4: Shattered Skies), but they’re far from the difficulty required for most flight sims, which is a good job since those are really not my forte and I can’t remember playing too many since the ZX Spectrum release by Digital Integration in the early 80s. In fact, if you’ve had plenty of practice in arcade flying games like Wipeout Fusion, then you should have few problems here, once you’ve got your bearings.

For the unsure, you may want to try before you buy, but for previous fans of the series, I doubt you’ll have anything to worry about with this title.

Ace Combat 4: Distant Thunder is out now on PS2.