Aliens Vs Predator: Special EditionWhoever wins… We lose.
Distributed by 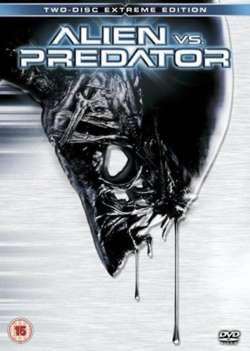 After all the hype, and the crap cinema reviews, I thought Alien Vs Predatorwas going to be total rubbish, but it turned out to be hugely enjoyable.

As the film begins, we learn that the Predators last appeared 100 years ago in the Antarctic and now havereturned. Heading into the present day, we learn there’s a pyramid, exhibiting Aztec, Egyptian and Cambodiansymbols, thus is thought to be the first-ever one built, and which emitted a heat bloom and needed exploring.But how did the Predators and Aliens meet? And why do they let themselves occupy the same territory? It’sexplained about an hour in, but don’t expect it to make sense in context with the individual-series movies.

By the time the team, made up of Alexa Woods (Sanaa Lathan in the feistySigourney Weaver role, equipping herself well here), explorer Sebastian de Rosa (Raoul Bova, lookinglike he’s in need of a shaver advert to appear in), Doctor Graeme Miller (Ewen Bremner) and the manwho’ll appear 150 years later inAliens: Special Edition,Charles Bishop Weyland (Lance Henriksen), here with the name Weyland used all the time and notBishop, as he was known in James Cameron’s 1986 actioner, are done for the day they’ve located the secretroom beneath the sacrificial chamber and taken some priceless artefacts that look like futuristic weapons,instead of returning to base for some well-earned shut eye, they’re locked in tight and about to becomefood for the enemy.

As the cast are sacrificed one by one, soon there won’t be any left until… the aliens and predators meet,and then it’s an all-out battle for two more well-matched opponents, who start off fighting each otherlike a WWE match. 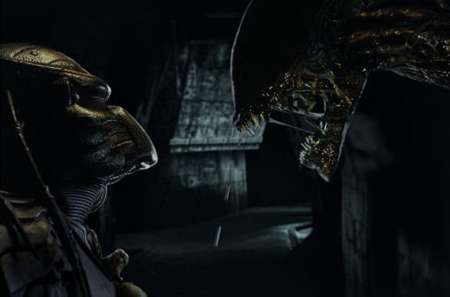 The two enemies meet face to face. At least, I think it’s a face.

The movie has a nice style as the alien eggs are introduced in the sacrificial chamber, as the cameraspins round the room to reveal them one by one. There’s still the requisite amount of shock, but not muchblood spilled as seems to be the case with post-9/11 Hollywood action flicks, but don’t let that put youoff as while Alien was an X, and then an 18-cert, the director’s cut has since been reclassified as a 15 too.

In addition, I can’t recall any, if many, saying ‘fuck’ in this, either, apart from a muted ‘motherfucker’,the second part of the word silenced by a gunshot.

As an action entry to the Alien and Predator franchises, with the proper audio/visual setup, it’s bloodyfantastic. When the war is won, by one side, and the number of humans is rapidly depleted, you just knowthere’s going to be one more of the other side to kick it off again for a final showdown. Plus, theobligatory cliffhanger which signifies a sequel that I hope comes soon as we’re always kept waiting forfurther entries in these sagas. Oh, and the underside of the alien spawn looks like a woman’s lower bits 🙂

When you put disc one in your DVD player, you get the choice of the regular version or the extended one.The latter is lengthened by around a minute, which is a pre-opening credit flashback of how everything kickedoff in Antarctica 100 years before. I can’t think why that was left out of the theatrical version becauseit makes for a great little set-up before we head for the present day. 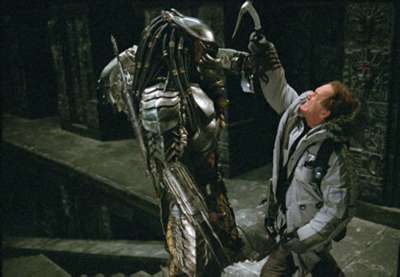 “Just because you’re bigger than me, you’re not taking my boomerang!”

Presented in 2.35:1 anamorphic widescreen, the print looks mostly fantastic, although there are a fewscenes that don’t look quite as sharp as they could be. Soundwise, I went for DTS 5.1 and it was outstanding!From the predators touching down in their own unique style, their ‘command centre’ coming to life with thefancy hieroglyphics, the Alien Queen thawing out – shortly after our heroes enter the pyramid, the pyramidchanging shape to just about any explosion you can lend an ear.

If you’re watching this on anything less than a DTS 5.1 setup, or cropped to 16:9 or 4:3 on TV in years to come,despite being filmed with the Super 35 process as that’ll only allow a decent 4:3 print to be struck forthe non-CGI scenes which are very few and far between, you really won’t get the benefit. The deleted/extendedscenes are opened up to 16:9 for non-CGI work, for example, but you can tell the CGI stuff is cropped.

Quite simply, if you want a great demo disc, buy this! 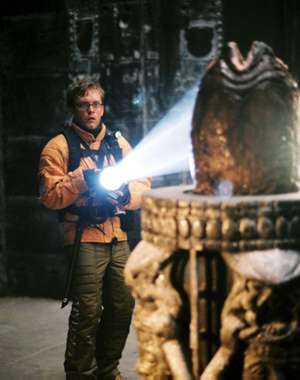 Not quite the Easter treat he thought it was.

The following lists the extras on the second disc, in addition to the commentaries on disc one (one fromPaul WS Anderson, Lance Henriksen & Sanaa Latham, the other from the SFX team of Alec Gillis, Tom Woodruff& John Bruno), but bear in mind the 2-disc edition is only really worth it if you want to study how theeffects were done in detail as a lot of it is the type of featurettes that you’ll watch once and nevergo back to. The supplements are split into five sections:

Disc one also features brief ‘Inside Look’ featurettes to Hide and Seek, Elektra and Robots,but I skipped through these as the first disc bombarded me with shitloads of annoying trailers that I hadto get past. Come on, Fox, this is what’s expected of old rental VHS tapes. Do like other companies, suchas Columbia, and stick these in a ‘Trailers’ section!

The menus are neat with brief, subtle animation and sound, there are subtitles in English for the hard of hearing,French, Italian, German, Spanish and Dutch and a decent number of chapters: 28.