Aliens Vs Predator Requiem: Special Edition
In space, no one can hear you scream.
On Earth, it won’t matter.
Distributed by 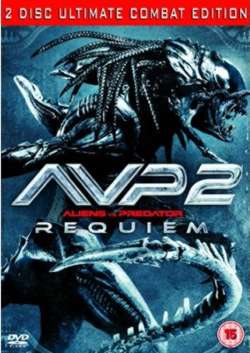 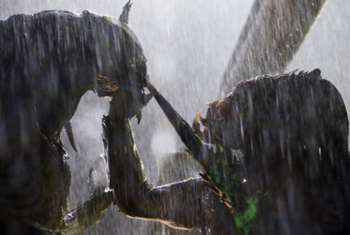 All the Alien films before this one have been great in their own way… even Alien3and I was very impressed withAlien Vs Predator when it came to delivering the entertainmentand packing it with a punch.

So, once again, out comes another sequel to a successful franchise and once again the papers slaughtered it. But, you’renot going to see Wittgenstein, here, you’re watching a piece of action/sci-fi fun. And if you want something that deliversthe visuals and the audio, plus the fun and entertainment, all in big fuck-off punches, then you’d think Alien Vs Predator:Requiem would be right up your street!

It is still a lot of fun in many places, but the two main problems are that you know which of the main characterswill survive without too much thought and there’s far too much of it in darkly-lit scenes (hence why there’s only onepicture – above – I could find to use in this review) so half the time whenthe Predator is trying to slaughter several aliens at once (rather than just the main one as in the previous film),you can barely make out a lot of what’s going on, especially as the camera jumps about far too much as well. Youcan see slashing and explosions and hear it all, but… it just doesn’t involve you as much this time round.

The premise here is that, an alien has just hatched out of the body of a Predator while on board the craft of the latter.However, that makes the new baby a Predalien, which should make for a tougher opponent when a Predator goes out to trackit down and get rid of it. But whereas AvP took place in an alien world, this sequel is set on Earth and for a lot of thetime we have teen kids in peril instead of mercenaries, including Ricky (Johnny Lewis), Jesse (Kristen Hager)and they’re led by adults Dallas (Steven Pasquale), Kelly (Reiko Aylesworth – yes, hottie Michelle Dessler from24) and Eddie the Sheriff (John Ortiz).

Hang on… there’s a man called Dallas in the characters. Will that have some significance later? No, sorry, it doesn’t. It’sa red herring. Shame.

Like AvP, this one’s a 15-certificate but there’s plenty of blood and gore when it counts. Some despatching takesplace just off-camera as one of the aliens discreetly tries to pop off a human, whether he’s a general member of thepublic or an army bloke, while the next moment might show you putting its mouth thing through the person’s brain.

And these things don’t discriminate between men, women or even children. They’ll take anything that moves and breathes.These aliens also have a nice new trick up their sleeve when it comes to impregnation, which I won’t spoil here 🙂

As with the first movie, though, whereas that one ended with the alien and predator having a WWE-style fight, in thisone it happens all the time – and with multiple aliens, and does get just a little tiresome.

One thing I really liked about the way the previous film, was that after the huge explosion there was still themain alien left to fight. This time round, there is a different twist which allows for a further sequel. Let’s justhope they hand the directing reins back to Paul WS Anderson. He managed it far better (and nowhere near as dark) as thepair in charge here.

Presented in 2.35:1 anamorphic widescreen, the quality of the DVD is mostly excellent with some outstanding CGI sequencesearly on. There are, however, a couple of fight scenes where the bitrate suffers, but mostly because it’s too dark.The sound, though, is never less than impressive with so many moments to select from to show off your sound system,in Dolby Digital 5.1 (and see my comments towards the end about how a DTS 5.1 soundtrack has been overlooked for thisrelease).

The following lists the extras on the second disc, in addition to the commentaries on disc one (one fromdirectors Colin and Greg Strause with producer John Davis, the second from Creature Effects Designers Alec Gillisand Tom Woodruff) and “Coming Soon” which is not-great-quality letterboxed trailersfor Jumper, Be Kind Rewind and Meet The Spartans.

There are eight featurettes plus stills galleries.

One thing we don’t get? A trailer. And according to the BBFC, even though the film is a 15-certificate, there’s an18-rated trailer out there which would be interesting!

So, if you are a massive fan and need to know every last thing about either creature then these extras should be for you.I do have an interest in them, but these featurettes could’ve used some trimming to make them more engaging.

Disc one begins with something that should have remained in the days of rental video: Trailers before the main feature.This is what the ‘extras’ menu is for on DVDs! Thankfully, there’s just one trailer: Shine a Light, the one about theRolling Stones tour.

The menus are neat with brief, subtle animation and sound, there are 28 chapters which is great for this running timeand there are subtitles in English for the hard of hearing as well as the two audio commentaries and there’s also anaudio descriptive track. However, as that’s in DD5.1 as well, this is surely just taking up space that a lovely DTS 5.1soundtrack could have occupied, which is what we got to experience on the previous movie!