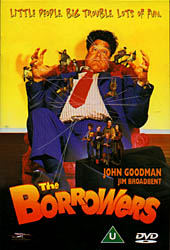 The Borrowersis the big-screen version of a long-standing classic story about the littlepeople who, literally, crawl out of the woodwork and steal things from thehumans, which they call “beans” after confusing human ‘beings’ with ‘beans’,much to the annoyance of those who are the victim of this childish cleptomania.

Running the household in which they live are the Lender family (hmm..spottingthe connection ?) who are being forced out of their home by their devilishsolicitor Ocious P. Potter who claims that their late aunt’s will does notentitle them to live in the house and the entire estate falls into the hands ofhis company.

Now what’s the betting that the Borrowers, who’d rather continue to live thereas well than have to seek new premises, will do everything in their little powerto ensure the point of closure falls in their favour ? Yes, it doesn’t take thebrains of Einstein to work that out.

The picture quality isn’t quite perfect, with some artifacts noticeable attimes, but on the whole the encoding does a remarkable job given the difficulttask of handling a print that’s full of harsh red colours. A bad encoding jobwould quite easily have resulted in a picture resembling a ZX Spectrum crashingbut not so here as it’s almost always a joy to watch. One slight hitch – andI tried this point several times – six minutes into the film just before JimBroadbent, as Pod, talks to his daughter Arrietty Clock, the picture freezesfor a split-second while the sound continues. Since it happens every time atthe same point I figured it can’t be my DVD-ROM player acting up. The setdesign throughout the film is fantastic.

The disc contains fullscreen and widescreen formats, the latter being presentedin anamorphic format – thus allowing extra resolution for widescreentelevisions – and, like Spiceworld, is presented in 1.85:1, just a bit widerthan the 16:9 (1.77:1) quoted on the back cover, thus replicating theoriginal cinema ratio. The widescreen version has an average bitrate is a verygood 6.58Mb/s, while the fullscreen version gains a bit with 6.87Mb/s, bothpeaking at over 9Mb/s.

The sound is spot-on with loud and over-emphasised sound effects in a filmthat doesn’t know the meaning of the word ‘subtlety’. The sound comes inDolby Digital 5.1 for English, German and Dutch, downmixing to Dolby ProLogicfor those without the requisite equipment.

Extras : Chapters :There are 15 chapters to pick from during the 87 minutes of the disc.There’s no theatrical trailer or any extras to mention whatsoever. Languages & Subtitles :

Three is the magic number for this disc. It’s the number of dialoguechannels in Dolby Digital 5.1 – English, German and Dutch, withsubtitles for the same. Both of the former include subtitles for thehard of hearing as well which means that any major sound effects arealso included within square brackets and displayed onscreen.

The menu is static and I have no problems operating it, but there’snot much to it in general and it’s rather bland. The copyright info canbe bypassed by accessing a previously bookmarked scene.

Overall, this is an engaging film for children and having recentlybought a house myself, it makes you wonder when certain items go missingwithout explanation, presuming the missus hasn’t got to them first. Afterseeing the film I think Mark Williams and John Goodman couldmake a great revival of Laurel and Hardy after their initial meeting.

However, although the film is fairly entertaining for adults the choiceto buy can only be made on the strength of the film and not on thenon-existent extras – a real shame since a behind-the-scenescommentary would have been a major bonus in explaining how the specialeffects were created. On the plus side, this release contains subtitles unlikethe region 1 DVD which doesn’t even have those.FILM : ***PICTURE QUALITY : ****SOUND QUALITY: *****EXTRAS: 0——————————-OVERALL: ***