Breakfast at Tiffany’s
Distributed by 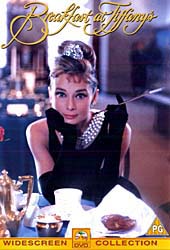 George Axelrod (from the novel by Truman Capote)

Moon River is wider than a smile..That’s all I ever learned from this film, a romantic comedy where its twoleads have an obsession with spending the first part of the day window-shoppingat a local jewellers, hence the title, Breakfast at Tiffany’s, whichis one of those romantic comedies your Mum likes.

Holly Golightly (Audrey Hepburn) is an independent woman and probablythe only one in the sixties who’s not off her head on experimental drugs andshagging till dawn. She’s due to marry Brazilian millionaire, but insteadfalls for her neighbour Paul Varjak (George Peppard, best known tome as Hannibal in The A-Team) .

Mickey Rooney also has a supporting role as the stereotyped Chineseneighbour. All his “l”s are “r”s and vice versa and he bumbles about morethan Closeau, which is of course exactly the way all Chinese people behave (!)

The picture is terrible at best. Grainy as hell all the way through, what wereParamount thinking of allowing this past Quality Control? Bright scenesoccasionally get away with it to a degree, but darker and indoor scenes suffergreatly. The only saving grace is that it’s in 16:9 widescreen and anamorphic.The average bitrate is a surprisingly high 7.87Mb/s, often peaking over 9Mb/s,although I can’t think why.

Just a two-and-a-half-minute Theatrical Trailer on which, unlike a lotof recent Paramount DVDs, is in anamorphic widescreen like the film and here,dare I say it, it often looks better than the film it’s advertising!

Just 14 chapters split up the 110 minutes which is not enough, although ourDVD is dual layer, unlike the Region 1’s single layer.

Despite being revered by the older generation, the film didn’t do it for meand the presentation is generally quite appalling. Someday, someone mayrelease a special edition. Well, they can’t leave this release on the shelvestoo long as it doesn’t do the content much justice.