Buffy the Vampire Slayer
for XboxDistributed by
Fox Interactive 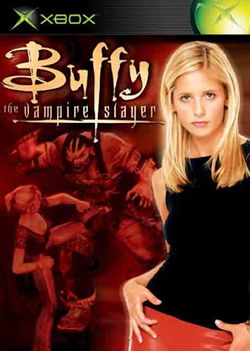 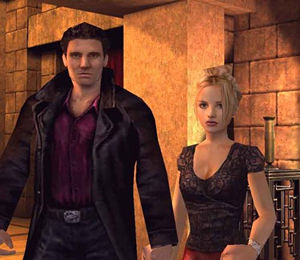 At least they all look right and many of her usual haunts are here, includingher high school, Angel’s mansion and The Bronze, but what does strike youquite early on is how the gameplay is almost entirely derivative of the TombRaider series.

You run, jump, climb up and fight the baddies, although it is largely well-blendedinto the Buffy ambience, the climbing onto ledges suffering because it justinvolves running up to them, not pressing a button to climb.

The graphics aren’t quite as perfect as they could be, as there are some jaggieswhere there shouldn’t be and it just doesn’t look as polished as it could be.Also, the game is only presented in 4:3, so any cut-scenes are letterbox andnot anamorphic. However, there is good attention to detail when it comes tothe walls fading to reveal where you are behind them, so you don’t lose yourselfwithin the scenery and I do like the way the scenery spins round but doesn’talways face forwards for you. While you can correct this yourself easily, Iprefer to hit out in all directions if I’m surrounded rather than keep retrainingthe camera every time I turn to hit someone. 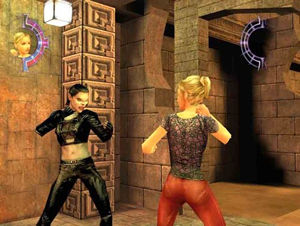 Soundwise things are better, with spooky noises all over the shop inDolby Digital 5.1, as well as brilliant ambience from the background soundtrack.

The gameplay is, well, like Tomb Raider, except that here the baddies can nickthe weapons from you when you drop them, eg. a rake. Also, if you think thegame isn’t saving your position, it does – it autosaves between levels. Whenyou come to reload the last saved game, you choose “resurrect”, given thetheme here.

And for those not familiar with the ins and outs of the show, first choose”Buffy History 101″ to get up to speed.

Overall, I’d say rent this first before you buy, given that it’s not the mostoriginal game and, as such, it’ll mainly have long-term appeal only for fansof the programme.