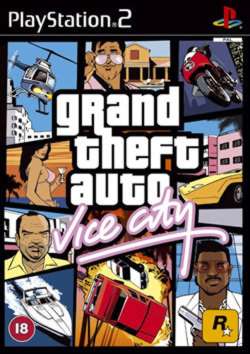 Grand Theft Auto: Vice City, quite possibly the most long-awaited game all year, and the sequel to Grand Theft Auto 3, a game which I played right until the end, even if I did spread it out over several months.

It’s 1986, and without being able to say “Miami Vice”, they’ve recreated the look with Ferraris, expensive one-colour suits or Gordon Gecko-a-likes and the music – YES, the music. I was a child of the 80s and, at the age of 14, 1986 was a time spent playing ZX Spectrum games like Quazatron and listening to Level 42 and Jean-Michel Jarre‘s Oxygene album. Aah, those were the days, and not a Mary Hopkins number in sight.

About the 80s music featured here, choice cuts include INXS – Kiss the Dirt, Mr Mister – Broken Wings, Laura Brannigan – Self Control, Michael Jackson – Billie Jean, The Outfield – Your Love… the list seems almost endless, given that a 7-CD boxset is available with all the tunes from the game on them for £29.99. 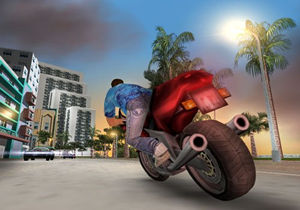 You play Tommy Vercetti, sent to Vice City, by your old boss Sonny Forelli, without a cent to your name. The idea is the same – complete a variety of missions, whilst stopping to steal cop cars and play vigilante, steal a taxi for a spot of Crazy Taxiing, or just killing people for a laugh and nicking their money. You know the drill.

Again, their are problems with the graphics. They are slightly better than last time, but since then we’ve seen what the Xbox can do and they don’t compare as well, If only the GTA series wasn’t console-exclusive to the PS2 then we could see what was really achievable. There is a nice effect when splashes and rain ‘drip down the screen’, although when you knock over a fire hydrant, you know the effect could be a lot better. 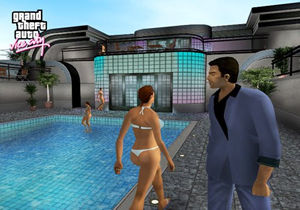 There’s also the usual camera glitches, and after only a couple of hours of gameplay I found one of those times where you’re trapped and can’t get out. I dropped the girl off at the club, then went back to the lawyer for a second time, crashed into the door from my bike, got stuck in the wall, and then I’d fallen ‘inside’ the building. It’s a big empty warehouse with a big black block where the door I came through was, which must be the only bit you can technically walk around from the other side.

This time round, the sound goes up a notch offering DTS 4.1 sound. It really enhances the mood, although why must it ask you every time you want to load in a saved game in this format? I’ve already told it I have DTS! 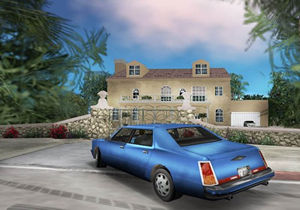 A few asides, on the plus side you can buy houses here, and you can now also jump out of car while it’s still on the road, instead of running out of road and drowning when it goes too far too fast, as well as controlling motorbikes and light aircraft.

However, a few niggles – I still wish you could save replays of your classic action stunts, there’s a longer wait between going in and out of FMV sequences and they shouldn’t have blocked off the new cities with impenetrable barries. It was fun before to drive off the edge of a bridge into the water. Also, one time I pressed the triangle to make him get in a car. he ran away in the opposite direction and hid in a bush!

I’ve only been playing this for a couple of days, so I know there’s more video glitches to come, yet far more wonderous sights to see, and I know that the missions will be as varied as before. In short, if you enjoyed Grand Theft Auto 3, get this one too.