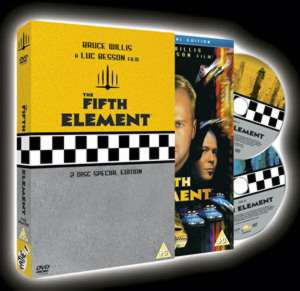 First there was only Earth, Air, Water and Fire…….
Then came The Fifth Element Special Edition on DVD

Directed by one of cinemas most talented and imaginative filmmakers, Besson(Taxi, Leon, Nikita, The Transporter), comes the critically acclaimed TheFifth Element Special Edition DVD. With a bold and stylish look into the23rd Century, Besson takes an adrenaline-pumped jump through time. Featuringa star studded line up – Bruce Willis (12 Monkeys, The Sixth Sense), MillaJovovich (Resident Evil, Chaplin), Gary Oldman (Nil By Mouth, Leon) and IanHolm (Alien, The Lord of the Rings), with costumes by Jean-Paul Gaultier, TheFifth Element Special Edition DVD takes you on a heart-stopping, mind-blowingjourney into the future.

Set in the year 2257, a planet-sized vessel of supreme evil is hurtling towardsthe earth with relentless speed, threatening to exterminate every livingorganism in its path. It has been left to the ex-marine and unlikelytaxi-driving hero Korben Dallas (Willis) to reunite the four stones thatrepresent the elements  Earth, Air, Water and Fire with the mysterious FifthElement to unleash the only power that will save the Earth. Joined on hismission by the intriguing Leeloo (Jovovich) and Priest Vito Cornelius (Holm),Dallas must retrieve the elements from the beautiful Diva aboard the luxurycruise ship, the Fhlotsin Palace.

Exploding with astonishing visual effects and breathtaking action, The FifthElement Special Edition is an essential part of every DVD collection. Thefull splendour of the Fifth Element can be experienced on this double discset, bringing all of the elements of the cinematic experience to your home asthe director and crew originally intended. The DVD extras include a commentaryby the special effects team and documentaries chronicling the making of TheFifth Element.

The DVD also contains Elements of Style, a featurette about the costumes bydesigners JeanPaul Gaultier and Jean Giraud, which helped the film tobecome an awe-inspiring visual spectacle. Go behind the scenes with a look atthe original designs by JeanClaude Mezieres and learn how Besson perseveredto get his childhood story onto celluloid to become one of the most influentialmovies of all time.