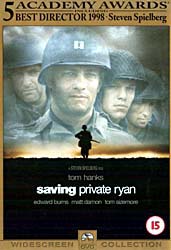 History was never my strong-point in schooland I’m not one for reading books, so sometimes the closest I’m going to getto a history lesson comes with watching a film and this one begins with theD-Day landings on June 6th, 1944 in the Dog Green Sector of Omaha Beach.

The first half-hour of the film addresses the problem of how do you keep yourhead when all around others are, literally, losing theirs. As soon as theramps are lowered and the soldiers are set to storm the beach, they’re cut downin their prime before they’ve had time to spit out their chewing gum. It’sliterally like shooting fish in a barrel. As for the rest who do make it outof there, for most of them it’s just a matter of time before they’re missingbody parts.

Once that mission is taken care of, eight of the men are assigned one moretask before they’re allowed to go home. Three of Private James Ryan’s (MattDamon) brothers have been killed in action and, with little informationto go on other than that he should be “somewhere in Normandy”, they must findhim and bring him back to base.

When I first heard of the plot I thought it was a typical American gung-hopiece of nonsense for which everything would turn out perfectly, but no,to find the boy is going to be a potentially-fruitless PR exercise, as theeight men reluctantly search for him and before they even get to meet himthey’ll hate him for what he’s unknowingly put them through. Not every onewill make it, so who will survive?

The Region 1 DVD was apparently a high quality digital transfer using the”C-Reality” process. It’s not stated whether the same applies her, but itdoes look mostly excellent with the only scenes that suffer from some artifactsare those that top and tail the film from the present day.

The film was show using Panavision Platinum and Panastar WWII era camerasand many of the war scenes were shot at 12 frames-per-second (fps) which givethem a slightly stuttering look that’s intentional.

Two DVDs were released in the US. One with DTS 5.1 sound and the other withDolby Digital 5.1. We only get the latter and it’s in English only. It’s nothingshort of first-rate with all the battle scenes taking most of the credits asbullets fly past with brilliant use made of the stereo separation. There’san amazing cacophony of sound effects as this happens while planes fly overheadand the tanks roll in.

The major extra on this disc is a 25-minute featurette, “Into the Breach”,which provides a fascinating insight into those who fought in the war, withcomments on how realistic they thought the film was and providing footage ofthe actual D-Day invasion. The booklet also includes some history notes aboutD-Day which are replicated here.

Also included are 2 Trailers in non-anamorphic 16:9 widescreen, one forthe film’s original cinema release and the other for when it was re-releasedwith a stack of Oscar nominations in tow, plus a few pages of ProductionNotes and Cast and Crew biogs on many of the major players.

Once again there’s not enough chapters – just 20 over thetwo-and-three-quarter-hour running time, but the menus are mostly animatedwith sound from the film’s haunting score. Both the dialogue and subtitlesare in English only.

Saving Private Ryan is a film worth seeing with many unsurpassablebattle moments, but does have it’s slow areas too. The BBFC’s liking forSpielberg accounts for the reason why scores of gory moments are still allowedwithin a 15-certificate film.