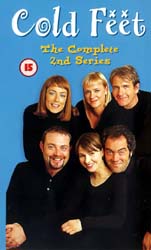 Cold Feet is a comedy-drama from Granada TV which quickly became one of my favourite programmes on the box. It follows the lives of three couples, each at different stages in their relationship, in the suburb of Didsbury, Manchester, how they get on within their own love lives and what happens when social interaction between the sextet goes too far on occasion. It’s definitely more than just a British ‘Friends’, despite the Helen Baxendale link.

After the release of Cold Feet: Series 1, this timeround it’s another two-disc set containing the entire second series and a 31-minute featurette.

Six months on after seeing Rachel (Helen Baxendale) take the train out of his life,possibly with his child in her belly, Adam (James Nesbitt) tries dating again after being egged on by Pete (John Thomson) and Jenny (Fay Ripley) and they set him up at their dinner party with Amy, a colleague of Pete’s.

Rachel returns to the scene of the crime and Pete spots her in the supermarket with a baby, but what colour is it and does that mean that Rachel didn’t have an abortion, so whosecan it be?

Elsewhere in the series, Rachel gets new employment with a position of authority and then proceeds to threaten her job prospects by bedding a member of her staff. They – and Adam and his respective beaus – often meet unexpectedly at the Printworks 20-screen cinema in Manchester’s Exchange Square. However, it’s not due to open until next month (November 2000 for those reading this afterwards), so when they went in ‘to watch a film’, there was only a bar available at the time. The forthcoming IMAX cinema is also in the vicinity too.

Pete has an affair and Jenny announces she no longer loves him, while David and Karen decide that poncy showing-off dinners for friends-that-pretend-to-be-friends are not for them and they scratch almost everyone out of their address book. Also, David wants to become a house-husband and forget about executive stress after a roadside scare which could have led to a fatal accident happening to their child.

Finally, in a bid to escape the heated emotions and mark the “meaningless moment in time”, they spend their Millennium celebrations, albeit a year early (!), at a far away locationwhich only David and Karen know about in advance. 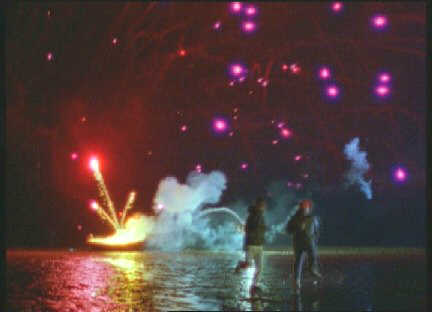 Adam and Pete’s ship explodes in a fit of fireworks.

Once again, Granada Media have done this series a great disservice. According to their PR dept., Granada could acquire the international master which wascentre-cropped to 4:3 for both series and it really isn’t good enough, withpeople getting cut off the screen and well-composed shots being completelyruined. I might offer the picture score at least 1/5 if it wasn’t for the factthat Granada made the damn show in the first place and so have no excuse not toget their hands on the proper anamorphic widescreen master.

I was offered the chance to put my views towards those in charge and havesent an email to be forwarded to them. At this point in time I have not yetreceived a response, but when I do – and hopefully it’ll be good news -I shall discuss the contents on my news page.

I still have series 2 on tape from when it was shown on ITV last year, but as is the want of DTT (Digital Terrestrial Television) via ONdigital, therewere several moments where picture break-up occurred.The average bitrate is approximately 6.34Mb/s over the first three episodes and5.41Mb/s over the last three.

As with the DVD for series one, there are no major sound problems. It’s in theoriginal Dolby Surround (Dolby Digital 2.0) and is only used for dialogue andgeneral ambience, so doesn’t often get a chance to shine.

At the end of series two’s final episode though, when it was broadcast on TVJohn Lennon‘s Love was played with vocals, while here it’s been replacedwith a new piano instrumental. I can understand there may have been problems withobtaining the rights, but it really does take the edge off things, as if the lack of a widescreen picture hasn’t made you lose interest already. 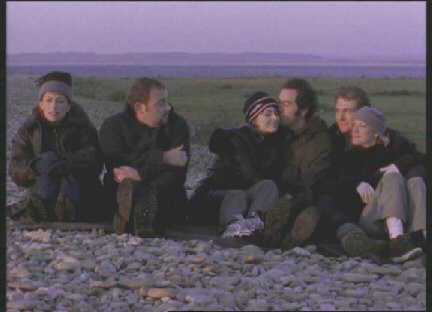 The cast had to huddle together to make sure they’d all fit onscreen at once.
Extras: The main supplement is a 31-minute featurette, On Location, which includes chat from some cast members during the first script read-through and others outside, with shots of when certain scenes were created (eg. Adam in his underpants running away from agiant testicle – believe me, it will make sense when you’ve seen the series – and the shooting of the final episode in the series on Holy Island in Northumberland). All of the TV clips included here are in a 14:9-cropped ratio, some of them with a slight anamorphicsqueeze (who was in charge of that?)

Also included is a 20-picture photo album, but again the images are too small and come twoto a page.

There’s a decent amount of chapters – 12 to each episode, totalling 72 – but acomplete lack of subtitles in any language and the menus are static and silent. 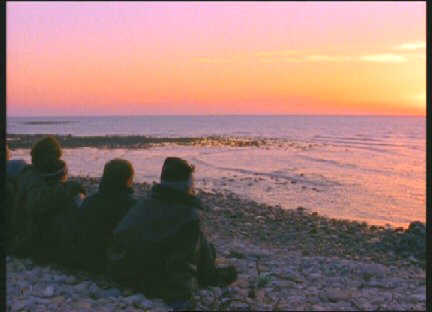 A perfect example of the picture problems.
Cropping to 4:3 leaves half a cast on the left and a “missing sunset” on the right!

So, here we are again, but not happy as can be. The picture’s still missing 25% of the original footage off the sides and there’s the aforementioned change of music losing Lennon’s lilting vocals and original piano accompaniment.

Series 3 begins very soon and will be extended to eight episodes and the cast havewangled a ‘Friends’-style pay deal, in which they’re paid per episode to the tune of £20,000 apiece, plus the same again for repeat fees, which will net each actor £320,000 for the whole series. It’s still a bit short of the ‘Friends’ $1 millionper episode for each of those six, but it’s better than a kick in the eye.

I can only hope now that when the third series reaches DVD too, someone will have found the anamorphic masters for the first two series and get the Cold Feet trilogy right!