Cold Feet is a comedy-drama from Granada TV which quickly became one of my favourite programmes on the box. It follows the lives of three couples, each at different stages in their relationship, in the suburb of Didsbury, Manchester, how they get on within their own love lives and what happens when social interaction between the sextet goes too far on occasion.It’s definitely more than just a British ‘Friends’, despite the Helen Baxendale link.

Highlights include the arrival of an ex-boyfriend of Rachel’s who turns up to stay for a while, a definite case of coitus interruptus as Adam and Rachel have sex in a shop window and astolen kiss between Adam and Jenny…

Series 1 ends in a cliffhanger that would be obscene to spoil here, although few willhave bought this DVD without seeing it on TV first. When I first saw this ending, it wasenough to break even the hardest heart. 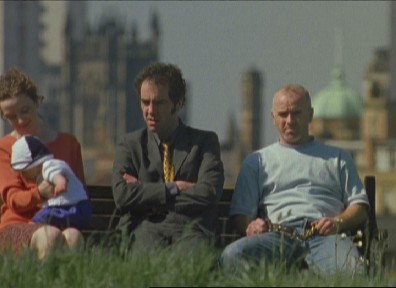 Adam tried to console his widescreen worries with members of the public.

A pin-sharp anamorphic 16:9 widescreen picture… is how I’d like to describe the way it looked via onDigital when the series was broadcast. Alas, I can’t. Some bright spark atGranada Media only managed to get the international master which was centre-cropped to 4:3.

As a result, the entire series is ruined with people getting cut off the screen and myhopes are dashed of collecting such a superb series on DVD, since Series 2, out next month,will follow the same way. Oh, and it’s rather out of focus at times. Still, with two discsin the set at least there’s a coaster for each of my coffee mug and water glass.The average bitrate is approximately 6.34Mb/s over the entire series.

The sound is fine though. It’s in the original Dolby Surround (Dolby Digital 2.0) andis only used for dialogue and general ambience, so doesn’t often get a chance to shine.At least it hasn’t been cut in half like the picture. 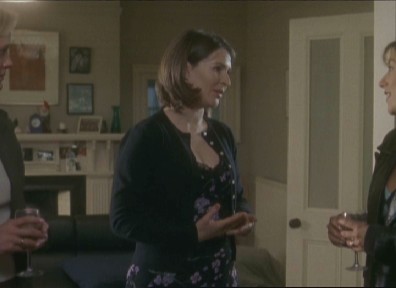 Rachel tried to discuss the problem with Jenny and Karen but couldn’t see them to do so!
Extras:

Chapters: 12 chapters for each of seven episodes, totalling 84. A very good amount.
Languages/Subtitles: Dolby Surround in English only with NO subtitles. Why couldn’t they be bothered to include them?
And there’s more…: Not a great deal though. A 10-minute featurette, The Meaning of Love, mixing in clips of the show (cropped to 14:9) blended with the same sort of intro shots as seen atthe opening of episode one proper (but cropped to 15:9). Oh, was it so much trouble to get *something* in the original widescreen ratio?! All the clips are incredibly grainy too.

A 20-picture photo album appears on disc two, but the images are too small and come two to a page.

Menu :A static and silent shot of the cast with the basic options. 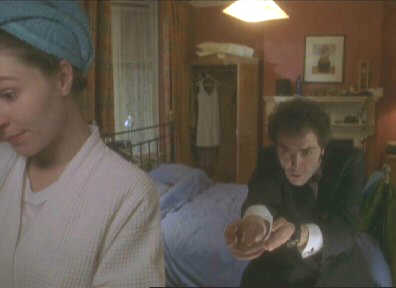 Rachel cut off her face to spite her nose,
while Adam shot the idiot in charge of commissioning a fullscreen edition.

Talk about a missed opportunity! Ok, so I’ve ranted on about the picture problems enough,but even if there are people thick enough to hate widescreen and demand a fullscreen edition,such a feature is available on DVD players which simply centre-crops the image as has beendone here against our will. About the only positive thing I can say is that there’s nochattering over the closing credits as was seen on TV.

…unless someone can get it right next time, in which case I’ll be praising it endlessly.