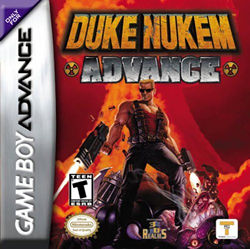 “I’m gonna rip off your head and shit down your neck!”

That phrase will bring memories flooding back to anyone who remembers the PC game, Duke Nukem 3D, one of the first post-Doom first-person-shooters and a sequel to two 2D platform outings for the wisecracking one, and now on the Gameboy Advance in Duke Nukem Advance.

Anyone who’s a gamer will know what to do without much introduction, so it’s safe to say that you begin in Area 51, the first of 19 levels, and you have to stop alien scientists intent on taking over the Earth, having already taken over that top-secret government base.

Let me just say that I absolutely fucking loved that game and spent many happy hours trying the same scene several times over to kill the pig cops in a different way, or trash the cinema, or sneakily throwing a pipe bomb into one of their dugouts, then inspecting the blood and guts afterwards. The graphics feel like they’ve been ported direct from the PC blaster, but suffer a little in the translation to the GBA because of the lower resolution.

It was also a FPS title that used sprites rather than polygons for objects, enemies and scenery, such that it doesn’t look as ‘advanced’ as similar other games of the genre since Quake was released and overall looks rather dated – and all that is the reason why it’s not always wise for experienced gamers to go back to the past because they don’t realise what’s gone on since their old favourites were first released.

There’s also slow-down sometimes, which isn’t meant to happen in console games at all.

On the sound front, the music is nothing to write home about, plus speech and gunfire are a bit on the scratchy side. 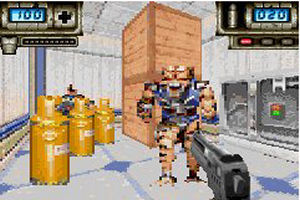 Overall, it’s another trip back to recapture the games of years gone by and there’s nothing wrong in that, but it’s definitely one that should be played by youngers gamers new to the Duke Nukem franchise.

This is because many PC users will be able to get, or have played to death, the original and while it’s fun for a while, or for a long car journey, it’s a far from essential title.

Some of the gameplay is a little too simplified for older gamers as well, since shooting across a room will hit those gas tanks, even if they’re not at the same height as you, because there’s no look up/down function here. Moving about can be a bit tricky as when you begin, you’ll often strafe left/right when you meant to turn in that direction.