But everything comes to an end at some point, and despite the event due to close at 6pm on the Saturday, although a lot of the home computers and consoles went off shortly afterwards, the arcade machines stayed on until close to 7pm. We’d had ample warning, but still tried to get as much time out of it as possible.

Below, you can see the Sega Multi-Mega, a Puckman machine and… well, it’s time for them to pack up. 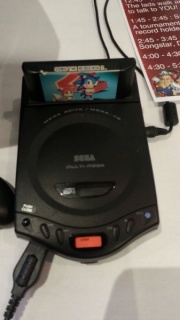 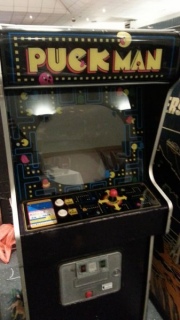 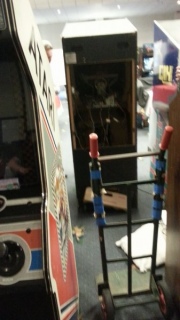 Unfortunately, I didn’t get to see any of the talks or much of what was going on in the first room, as I was in the arcade area for the majority of the day – so that means all the more reason to go for both the Saturday and Sunday next year – but as I emerged from the arcade room, I passed many more computers and consoles, some of which I’d sampled already where I’d spent the day, and some which I hadn’t.

Naturally, a lot of these had been switched off by then (and if they hadn’t, then I doubt I would’ve left at all), but I had a go on those which were still up and running.

In the pictures below, there’s Spiderman on a 4-switcher Atari 2600 – a game which I played many, many times, Doom 4-player LAN DOS gaming – something I wish I’d had a go at, but then I never was any good at multiplayer anyway, an Atari Jaguar (1993) playing Dragon: The Bruce Lee Story, a Mattel Intellivision (1979) which was clearly playing TRON: Maze-a-tron at some point earlier in the day, a ZX Spectrum, laden with extended memory, playing Cybernoid and a BBC Model B playing a game which, yes – you’ve guessed it, the name of which has escaped me. 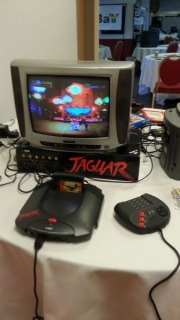 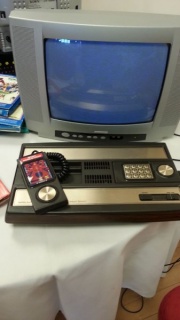 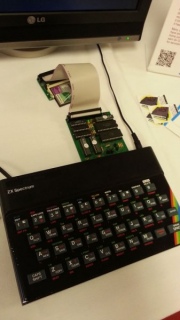 When I was at Keele University, I remember enjoying a game of Midi Maze on the Atari ST. These computers were all right next to each other, but at Uni, a mate and I were on separate floors of our block so it required a very long cable to connect between the two. There was no such thing as Wifi twenty years ago! 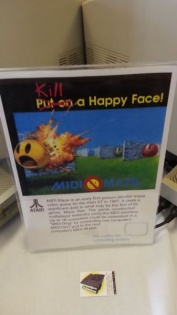 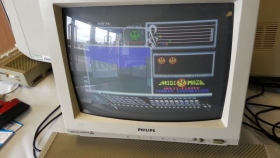 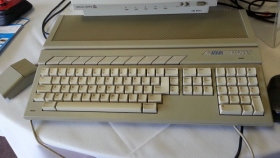 From this point, the majority of the machines featured come from The Centre for Computing History – along with the Spectrum and BBC just above. In the pictures below, they begin with a machine I’d never even head of before, an Apple Bandai Pippin (1995), their short-lived attempt at a multimedia technology console, which in 2006, was placed 22nd in PC World Magazine’s list of the “25 Worst Tech Products of all Time.”, while Atari had better fortunes with their Pong home console, which were first released in 1975 but I don’t know when this particular version was released.

Then there’s another Sega Master System, this time playing Missile Defense 3D , which was a curious title and, while wearing the glasses, did work rather well, although it wasn’t as effective as the Virtual Boy (see the bottom pic, although that’s not me in it). Next to it is an Action Max (1987), another machine I’d never even heard of, and one which used VHS tapes for games! It required its owner to also have a VCR, as the console did not have a way to play tapes itself. Similarly, another one next to me, on its right, is an Ending-Man BS-500 AS Terminator (1992), released in a number of European countries but not ours.
I wish I’d taken a better picture here, as I can’t even decipher what the black console with the blue buttons is. 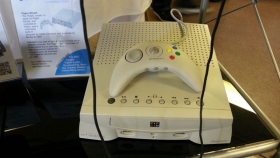 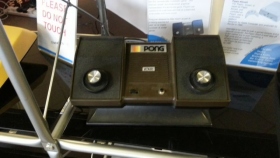 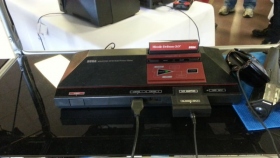 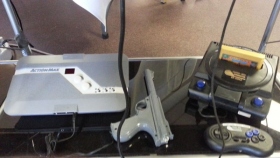 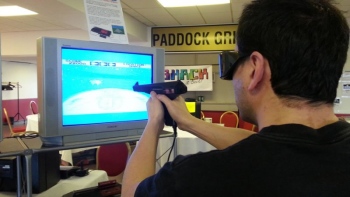 The next quartet begins with the Magnavox Odyssey 300 (1976), then an Aura Interactor which you strap onto your back and is meant to enhance the games. It was hooked up to the Sega Mega Drive, shown below it, which had a Mega CD attached to it, but I was playing T2: The Arcade Game without it on, because with so many wires all over the place, I didn’t want to accidentally make something fall off the shelves. 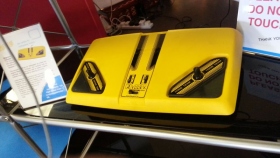 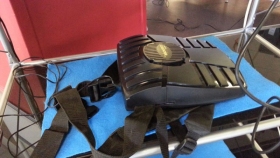 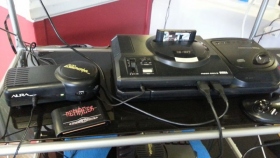 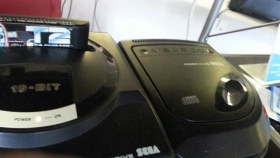