Then two more computers from the same area, and two I had had first-hand experience of back in the day: The Commodore Vic-20 (1980), playing Centipede here, and a ZX Spectrum +3 128K (1987), playing Chase HQ, a great game in the arcades and also enjoyable on home computers, despite the limited colours. 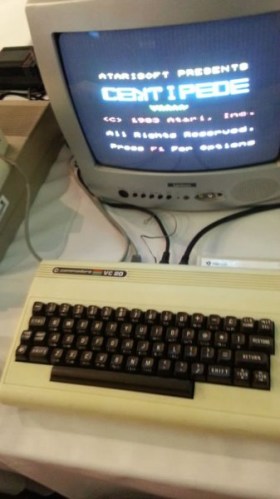 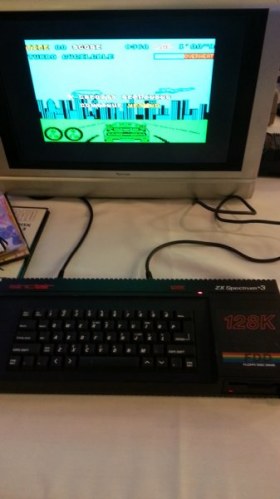 Would you believe I’d never played Goldeneye on the Nintendo 64 (1996) prior to Revival 2013? That is a fact, but I was happy to lose my 007 virginity here. Meanwhile, Dragon’s Lair is one of my all-time favourite games, and I’d never clapped eyes on the Panasonic 3DO (1993) back in the day, but while I got to see it, the machine wasn’t working for some reason. The image was playing up and the console just wasn’t playable. Absolutely no idea what happened here. Looking back, I probably should’ve tried to unplug/re-plug it in, but I had a feeling I might unplug something else inadvertently, so just left it. 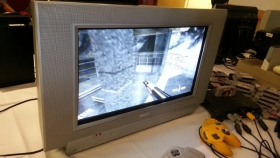 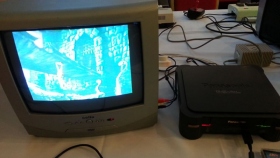 Four more consoles and computers from yesteryear: The original Xbox (2001), playing Outrun; next to a Nintendo Entertainment System (1985), playing a game, the name of which I’ve forgotten. And in these cases, the pictures on the screens were fine, but my phone’s camera didn’t get on with them for some reason.

Then a Texas Instruments TI-99/4A (1981) playing Scramble, an Atari 400 (1979) computer playing Pac-Man, and a Playstation 2 (2000) (out of shot) playing Gran Turismo with a steering wheel… and after playing it with that, I actually prefer using a joypad because it just feels more normal for playing at home. 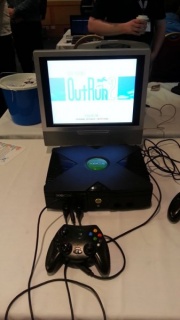 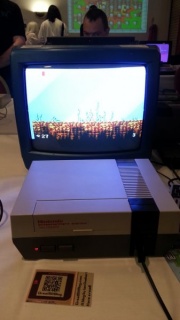 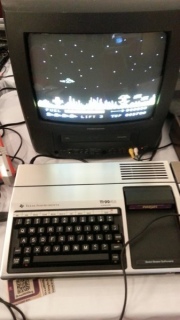 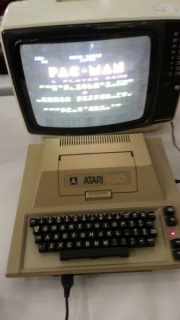 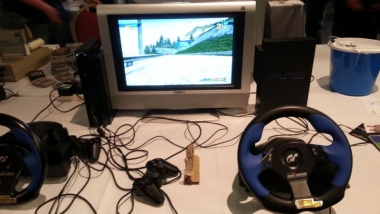 Next up, an Acorn Electron (1983) playing the wonderful Chuckie Egg, and, another classic Sinclair machine with RAM pack-types oozing out the back of it, a ZX81 (1981) running several games from a menu, including Manic Miner. Yes, Manic Miner on a ZX81! Fantastic!! 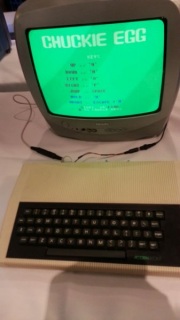 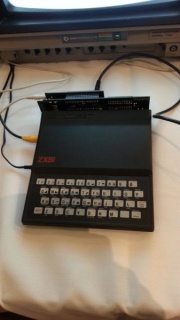 And, adding to the list of machines I hadn’t seen in the flesh before, a Tatung Einstein (1984), shown here playing miner Willy’s second adventure, Jet Set Willy. 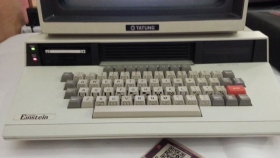 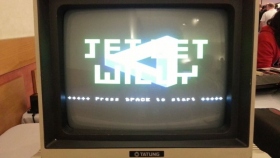 Then a Sega Megadrive (1988) with Mega CD (1991) and 32X (1994), playing a game I can’t remember the name of, and then the Philips CD-I (1991), the attempt to make Video CD the way to watch films in the home, playing interactive title Mad Dog McCree, although even after attempting to calibrate it, it still didn’t work properly and the gun’s sight wobbled all round the screen like it was sat on a jelly.

When the latter was first launched, a salesman once told me, “Anyone thinking of buying a VCR to watch films on, these days, should seriously think of investing in one of these.” I tried to stifle my giggles as I left the shop, since the pixelation on the MPEG-I format was so bad it was like watching Freeview in a rainstorm. 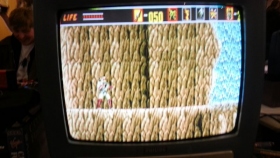 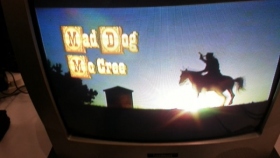 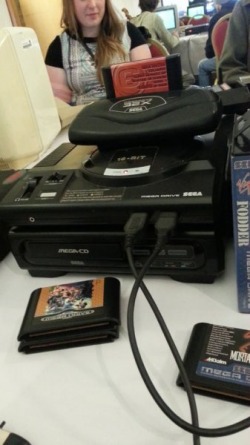 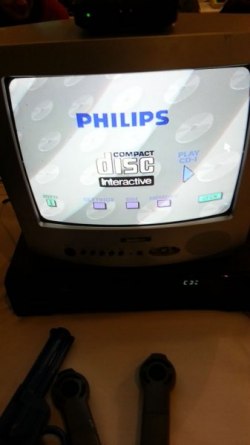